The GNMA-Y0001 Empruss (aka Empruss) is the prototype mobile armor to GNMA-0001V Regnant featured in Gundam 00P Special Edition and season 2 of Mobile Suit Gundam 00. It is piloted by Devine Nova.

Empruss' design has similar features to the GNMA-XCVII Alvatore; however, the unit doesn't have any bits/fangs for utilization. It's equipped with two GN T drives, a powerful particle cannon, two pairs of GN Cannons, GN Field, two grappling arms with Egner Whips, and two large anti-ship swords. The unit is a dedicated mobile armor fighter; it doesn't have any hidden abilities nor transformation abilities like Alvatore or Regnant. In its head are three eyes.

A powerful beam cannon that uses a large amount of concentrated GN particles. It is a weapon reminiscent of the Alvatore's main weapon, although it is unlikely that the Empress's particle cannon can match the Alvatore's in terms of power or recharge rate since it has few GN Tau Drives. However it is possible that, with the advancement of the GN Drive technology used by the Innovators, the Empruss' two GN Drives are somewhat comparable to the Alvatore's seven.

Four powerful GN beam cannons are part of the Empress's compliment of weapons. They possess a greater rate-of-fire than the GN particle cannon making them a superior weapon for when dealing with high speed targets. Two are located beside the head useful for anti-air attacks, while the other two are located on the underside of the Empruss useful for anti-ground attacks.

They are mounted on the Empruss' arms. The power and firing rate is unknown as Devine didn't fire them.

The Empress is equipped with two forward mounted pincer-like claws. The claws are mounted on arms normally stored within the mobile armor's body and can shoot out Egner Whips.

The Egner Whips are oval shaped shells attached to the claws by a long wire and are capable of penetrating GN Fields and once in proximity with enemy Mobile Suits it releases four more conductive wires, all charged with high voltage electricity. The Egner Whips can be used in conjunction with the particle cannon in a devastating combo where the wires ensnare and disable a target, leaving them open to be hit by the powerful beam of the particle cannon.

The two "wings" of the Empruss are actually large GN Swords, useful for slicing enemy battleships or mobile suits.

The Empruss was first introduced in the aftermath of Memento Mori's destruction, accompanied by Gadessa and Garazzo, piloted by Revive Revival and Bring Stabity. They attacked an exhausted Ptolemaios 2, which was low on particles. However, the ship was able to escape into the atmosphere, thanks to the tactics of Sumeragi Lee Noriega.

The Empruss was later docked to an A-Laws cruiser. On seeing the prototype for the first time from the cruiser' stern, Louise Halevy was told that she would be receiving the Mobile Armor that was made from the Empruss's combat data, courtesy of Ribbons Almark.

Divine/Empruss later joined the majority A-Laws forces to attack Ptolemy 2 while it was badly damaged. Divine was able to incapacitate Allelujah/Arios and Tieria/Seravee but was ordered to retreat when the regular army initiated a coup d'état. It attempted to destroy the 00-Raiser after intercepting the Gundam that was on its way to destroy the second Memento Mori. It nearly succeeded when it trapped 00-Raiser with its electric wires but was quickly destroyed when the Gundam entered Trans-Am and used a powerful Raiser Sword in episode 17 of the second season.

Two GNMA-Y0001 Empruss (Mass Production Types) piloted by Devine Nova clones (in Mobile Suit Gundam 00P special edition 3) were deployed in a trap for Fon Spaak. They managed to damage Fon's Avalanche Astraea F Dash but could not defeat it. Fon then got bored of the battle and headed directly for the trap, a bomb in the lunar base, which soon exploded. However, Avalanche Astraea F Dash managed to rush out of the base amid the explosion. This daring act by Fon caught the two Empruss outside off guard, and he managed to escape safely. 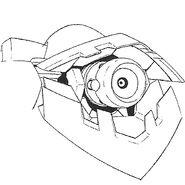 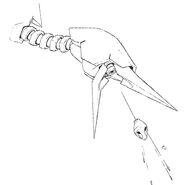 Docked with a cruiser

Louise and Devine observe the Empruss

Retrieved from "https://gundam.fandom.com/wiki/GNMA-Y0001_Empruss?oldid=457915"
Community content is available under CC-BY-SA unless otherwise noted.