The GNMA-XCVII Alvatore is a mobile armor introduced in season one of Mobile Suit Gundam 00 and is piloted by Alejandro Corner.

Deployed by the UN Forces in the final battle against the Celestial Being, the Alvatore was developed and piloted by Alejandro Corner to fulfil his ambitions of ruling the world.[1][2][3][4] The group known as Innovators was also involved in its development.[5] This huge mobile armor incorporated technologies from the Gundams and was primarily based on the 1 Gundam.[6][7][8][9] However, unlike the highly versatile mobile suit it was based on, the Alvatore has a singular focus on power.[7] This change in specifications seem to be tailored to its mission and with its heavy firepower, it drove the Celestial Being's Gundams and their mothership, the Ptolemaios into a corner.[1][7][10]

The source for Alvatore's overwhelming destructive power is the seven GN Drive Taus mounted on its back.[1][2][6][11] The massive output from these GN Drive Taus not only power the mobile armor's beam weaponry, but is also used for the generation of a strong GN Field, granting it high defensive capability against projectiles and beam shots.[1][6][11][12] The Alvatore's main weapon is a high-output, huge beam cannon capable of ultra-long-range attack that is mounted in the front of the machine.[1][4][6][11] For medium and close-range combat, the Alvatore is armed with numerous other beam cannons, remote controlled beam weaponry, and claw arms.[6][10][11][13] Beside its seven GN Drive Taus, another eye-catching aspect of the Alvatore is its gold color scheme, which is due to a special coating applied to the armor surface.[1][7][10] This coating is capable of diffusing certain beam shots, granting some degree of protection against beam weaponry when the enemy get past Alvatore's GN Field.[1][7][10]

The Alvatore also has a pair of legs, but they are usually retracted and stored at the bottom of the mobile armor.[2][6][12] During battle, these legs can unfold and be used for attitude control purposes and to cope with close-range combat.[2][6] Outside of battle, the legs function as landing gears for landing on spaceships and in areas with gravity.[2][6][12] The legs' presence also suggested that the Alvatore can be deployed under gravity.[12] Stored at the top of the Alvatore is the GN Drive Tau-equipped mobile suit, the Alvaaron.[2][6][10][12] The Alvaaron is regarded as the core unit of the Alvatore, with Alejandro controlling the mobile armor from within this mobile suit's cockpit.[2][6][12][14] In fact, the Alvatore is merely enhancement parts for the Alvaaron and this relationship is reminiscent of the Gundams and the GN Arms.[7][15][16][17]

When required, such as in the event that the Alvatore is rendered inoperable, the Alvaaron can separate from the mobile armor and operate independently.[4][6][10][12] Unlike the Gundam Thrones and the GN-X, the Alvatore's and Alvaaron's GN Drive Taus emit golden yellow GN Particles instead of red-colored particles.[1][10][14] This change is however believed to be only cosmetic and done to suit Alejandro's preference for gold color.[18][19] Although the Alvatore was defeated by the Celestial Being, it pioneered the concept of large mobile armor and its data was later utilized by the Innovators in the development of another large mobile armor - the Empruss.[5][8]

The Alvatore's primary armament, this huge beam cannon can hit enemies at extreme long range and has overwhelming destructive power.[1][6][12][13] The damage dealt by the GN Beam Cannon to the Gundams and their mothership, the Ptolemaios, contributed greatly to the UN Forces' victory.[1][6][7][10] Mounted in the front of the mobile armor, the cannon has a flexible barrel that extends when deployed and its muzzle is protected by four covers that flip open prior to firing.[1][4][6][12] Additionally, the flexible barrel can bend, allowing the cannon to shoot at enemies from various angles.[2][6][10][12] The GN Beam Cannon can be fired even when the Alvatore's GN Field is deployed.[1]

Meant for both offense and defense, the 22 Side Beam Cannons are spread across the Alvatore's left and right sides, 11 on each side.[2][6][10][12] These cannons are concealed behind armor plates that slide up when they are used.[2][6][10][12] Despite their small size, they have sufficient firepower to destroy the Gundam Exia's GN Shield and are capable of dealing lethal damage to mobile suits.[2][6][10][12] These cannons are also suitable for engaging multiple enemies simultaneously and can be fired even when the GN Field is deployed.[10][12]

A set of 6 large, wireless, remote beam weaponry stored in the Alvatore's rear stabilizer, 3 in each side.[2][6][10][12] They are launched once the stabilizer's armor plates slide open.[2][6][10][12] These mid-range weapons can be used to conduct all-range attacks and to engage multiple opponents simultaneously.[3][10][11][12] The Alvatore's Large GN Fangs are also known simply as "GN Fangs", and although they have similar technology as the Gundam Throne Zwei's GN Fangs, they lack close combat capabilities such as the ability to generate beam blade.[2][6][12][20] Instead, the Large GN Fangs merely serve as shooting weapons, firing beams from the emitter in their tip, and this reduction in function is to make them easy to control for Alejandro.[2][10][12][20]

A pair of huge claw arms for close-combat, they are stored in the sides of the Alvatore, below the Side Beam Cannons.[1][2][6][12] They unfold and flip forward when in use, and have a wide movement range due to their ball joints.[1][2][6][12] These arms have sufficient power to crush a Gundam and can even tear apart large machine such as the Assault Container.[1][2][6][12]

Like the Gundam Virtue, the Alavtore can deploy a spherical GN Field barrier around itself for defensive purposes.[1][3][6][12] Powered by the massive particle output from the seven GN Drive Taus, the Alavtore's GN Field has high defensive capability and is impervious to most physical and beam weaponry as seen when it easily blocks the Assault Container's GN Missiles and beam shots.[1][3][6][13] However, the GN Field can be penetrated by physical blade enveloped in GN Particles, such as the GN Armor Type-E's Large-Sized GN Sword, and through brute force, as seen when the Assault Container rammed its tips through the barrier.[1][6][10][21] When the GN Field is deployed, the Alvatore can still fire its beam weaponry and use its Large Close-Combat Arms against opponents outside of the barrier.[1][10]

A special gold-colored coating capable of diffusing particle beams is applied to the surface of the Alvatore's armor.[1][7][10] However, this coating is only effective against beams up till a certain power level and can be overpowered by more powerful beams.[1][10] This is shown when the coating diffuse the beam shot from the Assault Container's GN Beam Gun, but failed against that of the GN Armor Type-E's Large-Sized GN Cannons.[1][10] With its limited practical effect, the coating is deemed to be not worth its gold color that stands out on the battlefield, and is not used by other mobile weapons outside of the Alvatore and Alvaaron.[7] Some people feel that the coating's color is due to Alejandro's personal preference, as he had a record of favoring gold-colored belonging and ornament.[7] However, others find this explanation to be too hasty.[7] These people hold the opinion that since Alejandro's goal was to cause the collapse of Celestial Being by defeating the Gundams, and through this great achievement be viewed as a hero by the world, the gold color might have been a post-victory political strategy, meant to further fortify his heroic image.[7]

A system that allows a mobile weapon's pilot to control the machine’s remote weaponry.

Following the loss of the captured Gundam Throne Zwei and 14 GN-Xs, the Alvatore was sent by the UN headquarters to reinforce the UN Forces battling the Celestial Being. After meeting up with the Alvatore, the UN Forces launched its final assault on the Celestial Being's Gundams and their mothership, the Ptolemaios. The Alvatore fired the first shot of the battle with its GN Beam Cannon, dealing minor damage to the Ptolemaios' left side. The mobile armor quickly followed up with a second shot, but it was evaded by Ptolemaios. To eliminate the mobile armor, the Ptolemaios launched the Assault Container, loaded with Gundam Exia and GN Arms Type-E. On the other end of the battlefield, the Alvatore stayed at the back as the GN-Xs charged ahead and battled Gundam Kyrios and Gundam Nadleeh.

The Alvatore soon encountered the Assault Container, but its GN Field easily blocked the latter's GN Missiles and beam shot. The Alvatore then fired its GN Beam Cannon two more times. The third shot not only destroyed a GN-X pursuing Kyrios, but also took out the Gundam's right arm and leg, and wrecked the Ptolemaios' right side, severely damaging the ship's container 3 and 4, destroyed its sickbay and also disabled the ship's GN Field generation system. For the fourth shot, it hit and destroyed the Nadleeh's right leg, and also forced the Gundam out of Trans-Am. The fight between the Alvatore and Assault Container carried on, with the mobile armor's GN Field protecting it from more beam shots. The Assault Container then activated its GN Field and rammed the Alvatore in an attempt to penetrate the mobile armor's GN Field.

Despite the damage, the GN Armor Type-E charged at Alvatore again and the two landed more shots on each other. The Alvatore then deployed its GN Field and fired another barrage from its Side Beam Cannons. However, this failed to discourage the GN Armor Type-E from another charge, and the Alvatore's GN Field was penetrated by the latter's right Large-Size GN Sword, which was then lodged in the left side of the mobile armor's body. After this, the accumulated damages finally took its toll on the GN Armor Type-E, and the machine exploded. Unfortunately, the Exia ejected in time and the Alvatore was severely damaged by the Gundam's GN Sword. The Alvatore soon exploded, but not long after, the Alvaaron revealed itself from the mobile armor's wreckage.

Six years after the destruction of the Alvatore, a similar-looking mobile armor is depicted in a movie titled Celestial Being. 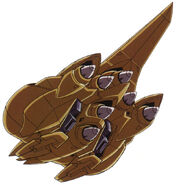 Covers of the GN Beam Cannon open for firing

Close up of Large GN Fang

Firing Side Beam Cannons while GN Field is deployed 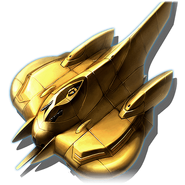 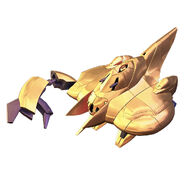