The GNMA-04B11 Trilobite (aka Trilobite) is an aquatic mobile armor first featured in season two of Mobile Suit Gundam 00.

The A-Laws, an autonomous peacekeeping force of the Earth Sphere Federation, utilized some of the funds they received from sponsors in the private sector in the development of new weaponry, with the Trilobite being an example.[1][2][3][4] Developed and manufactured by the Union Arsenal for the A-Laws, the Trilobite's creation was possible due to generous donation from a woman.[1][5][6][7] This aquatic mobile armor incorporated GN Drive Tau technology from the GNX-603T GN-X and is powered by three GN Drive Taus, one at the back and two at the base of its arms.[5][6][8][9] As a result, the Trilobite's output and thrust surpassed that of a Gundam equipped with an original GN Drive, and has astonishing mobility even in the deep sea where the water pressure is high.[1][4][6][9] However, its performance is inferior to a Gundam's when the latter activates its Trans-Am System.[1] The "04B11" in Trilobite's model number indicates that it is the 11th machine with B equipment of the 4th system.[5][6]

The Trilobite can switch between two forms: "Cruising Form" and "Battle Form".[7] In Cruising Form, the Trilobite has a compact shape to reduce water resistance when cruising, while in Battle Form, the mobile armor's arms are extended for melee combat and the rear-mounted weapons container splits into four parts for the launch of weapons stored within.[1][6][7][10] Besides the arms that are equipped with claws and built-in spears for melee combat, the Trilobite's weaponry also included two types of torpedoes, two types of bombs capable of restricting enemy's movements, and missiles for attacking targets on the water surface and on land.[3][6][11] The mobile armor is not equipped with any beam weaponry as such weapons have reduced power in the water.[6] As the variety of weaponry made piloting the mobile armor difficult, a tandem-seat type cockpit was adopted, and this reduced the burden by splitting the machine's controls between a pilot and a gunner.[1][6][10] The pilot, who is in the front seat, has overall control of the Trilobite and its arms, and the gunner behind is in charge of ranged weaponry and the weapons container.[6][10]

The Union is known for its transformable, flight-type mobile suits, and the development of the aquatic Trilobite by the Union Arsenal demonstrated the Union's high technical capabilities and that technologies developed for flight-type mobile suits can be applied to mobile suits in other fields.[6] In particular, data and technology of the SVMS-01 Union Flag series were utilized in the Trilobite's development, with the mobile armor's main camera composed of the same sensor elements as used in the flight-type mobile suit.[5][6][8][9] Technologies derived from the Union Flag series were also incorporated in the Trilobite's ability to switch forms, as well as in the structure of its cockpit, which is below the main camera.[6] The cockpit is encased in a spherical cage, and through gyro control, it is stabilized regardless of the mobile armor's movement.[6] Additionally, a dedicated residential block is situated behind the cockpit in consideration of prolonged underwater operation.[6][11] Data of the Trilobite was later used in the development of the amphibious assault mobile suit, the GNX-612T/AA Superbia GN-X.[6][8][12]

The two red-colored sections on the sides of the Trilobite are Claw Arms for use in close combat.[3][13] The arms extend when in use and have a pair of front-mounted claws that flip out from within for grappling enemy units.[1][3][6][13] Additionally, a Linear Spear can slide out from each Claw Arm when the black-colored cover at the tip of the arm opens.[1][3][6][13] The spear emits electromagnetic waves and can be used for piercing enemy ships or to attack enemy mobile suit.[1][3][6][13]

Each of the Trilobite's arms also store 6 Small GN Torpedoes, which are fired from a flap on the outer edge of each arm.[3][6] As such, moving the arms can change the launch direction of these torpedoes.[6]

A new model of torpedo, it can break through GN Field to damage its target.[1][6] The Trilobite carries 24 Large GN Torpedoes in its rear-mounted weapons container.[6][11] To launch these torpedoes, the weapons container splits apart, with each of the resulting 4 sections having 2 ports for firing the projectiles.[1][6][11]

The Chemical Jelly Bomb is another weapon stored in the rear-mounted weapons container.[6] As with the Large GN Torpedoes, the weapons container has to split into 4 sections to release these roundish bombs, with each section having a port for doing so.[6] Upon impact, the synthetic resin within these bombs absorbs seawater, then expands and solidifies into a mesh-like structure that restricts the enemy's movement.[3][6][11][13] An identical resin is also used in the Depth Charges of the Bering-class aircraft carrier.[1][6]

Although the Trilobite is mainly armed with underwater-use weapons, it also carries missiles for hitting targets on the water surface and on land.[6][11] These 4 Anti-Ship/Anti-Ground Missiles are launched from 4 covered ports on the mobile armor's main body, behind the sensor unit.[6]

A chain-shaped bomb stored in the Trilobite's main body.[6] It is designed to entangle the enemy ship's propeller or the joints of the enemy mobile suit, hindering movement and then explodes.[6][11]

The Trilobite was first deployed by A-Laws to destroy the reborn Celestial Being's CBS-74 Ptolemaios 2 in the Straits of Hormuz. The Trilobite began its assault with a barrage of torpedoes, with the Large GN Torpedoes breaking through the Ptolemaios 2's GN Field and damaging one of the ship's lower container. The Ptolemaios 2 then moved to a shallower depth to launch its Gundams, but was hit by Depth Charges from the A-Laws' Bering-class aircraft carrier. These Depth Charges contained a special resin that spread around the Ptolemaios 2, restricting its movements. The Trilobite then rammed the ship with its Linear Spears, dealing further damages to the hull. However, the Trilobite's attacks also speeds up the flooding of the lower containers, facilitating the Gundams' launch.[1]

The first Gundam encountered by the Trilobite was the GN-008 Seravee Gundam, which tried to push the mobile armor away from the Ptolemaios 2. Initially, the Trilobite managed to pushed back Seravee using its huge thrust, but the table was turned when the Gundam activated its Trans-Am System, easily accomplishing its task. Surprised, the pilots of the Trilobite attacked using the Linear Spears, but they did little damage to the Seravee. The mobile armor was then hit by covering fire from the GN-006 Cherudim Gundam. While evading shots from the Cherudim, the Trilobite attempted to fire more torpedoes, but it was intercepted by the GN-0000 00 Gundam. The mobile armor used one of its Claw Arms to attack the 00, but the latter sliced the weapon apart using a GN Sword II. The Trilobite was then slashed in several locations by the 00 in quick succession, resulting in the mobile armor's destruction.[1]

Sometime later, the A-Laws accurately predicted the Ptolemaios 2's location and launched six Trilobites in the area to search for the ship. The Trilobites eventually found the Ptolemaios 2 and tried to encircle it, but the ship rapidly surfaces to escape the encirclement as well as prepare for its launch into space. The pursuing Trilobites fired their torpedoes to stop the ship, but the enemy's tactical forecaster had already expected the attack and had the Ptolemaios 2 ride on the torpedoes' explosion, successfully accelerating its ascend into space.[14] 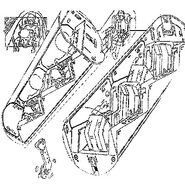