The GNMA-0001V Regnant (aka Regnant) is a Mobile Armor introduced in season 2 of Mobile Suit Gundam 00. It was developed based on the GNMA-Y0001 Empruss and was piloted by Louise Halevy.

A large Mobile Armor (MA) with a mechanism for transforming into a Mobile Suit (MS), the Regnant was made by the Innovades that called themselves the Innovators.[1][2][3][4] The Innovators' development of large MA equipped with multiple GN Drive Taus started with the deployment of the prototype GNMA-Y0001 Empruss to collect live combat data, and based on these data, the Regnant was developed.[5][6][7][8] The leader of the Innovators, Ribbons Almark, then gave the completed MA to A-Laws' pilot and sponsor, Louise Halevy, who he had placed high hopes on.[2][3][4][9] The Regnant's MA form is suitable for long-range cruising and high-speed combat, while its MS form is suitable for melee combat and anti-MS battle.[4] It primarily engages in aerial and space battles, but can also participate in ground battles using its humanoid MS form.[1][10][11] In fact, based on its design specifications, it is possible for the MS form to walk under gravity despite its top-heavy appearance, and this is thanks to the effects of the GN Particles produced by its GN Drive Taus.[4][5]

The Regnant has a large head unit, which consisted of an oval, hood-like canopy that hides and protects the MA's real head.[1][4][12][13] This canopy also has a slit at the front that contains the MA's main camera.[4][12][13] The Regnant's real head has a hidden Gundam-like face, and this is a result of the utilization of the Gundams' design data within the quantum processing system Veda in the MA's development process.[1][2][3][13] Additionally, due to the incorporation of data from the GNX-612T/AA Superbia GN-X, a MS the Innovators had a hand in creating, the Regnant's Gundam-type head was equipped with the same head sensor unit as the former.[14][15][16][17] Ironically, Louise Halevy is unaware that her MA bore the face of the Gundams she hated.[1][2][4][12] Below the Gundam-type head is Regnant's cockpit, which has the same design as the one adopted by the Innovators' GNZ series MS, such as the GNZ-003 Gadessa.[4][12][18]

In terms of combat capabilities, the Regnant inherited the Empruss's high level of offensive and defensive power, as well as mobility.[7] The MA could engage multiple Gundams by itself thanks to powerful weaponry, such as a GN Beam Cannon that fires a beam that can curve, remote-controlled GN Fangs that are capable of all-range attack, and Egner Whips that can restrain and electrocute the opponent.[2][3][4][5] The Regnant's weapons are located throughout its huge body and all of them are usable in both MA and MS forms.[4][13] The MA's huge size also gives it a physical advantage when battling the Gundams.[4] For defense, the Regnant can generate a powerful GN Field barrier to block attacks from any direction.[4][9][19][20] The Innovators had a plan to mass produce the Regnant, but the group was defeated just before it could roll out the second unit, the GNMA-0001V2 Regnant 2.[4][5][21][22] After the Innovators' defeat, the Regnant's wreckage was recovered and studied by the Earth Sphere Federation Forces, leading to the creation of the GNMA-Y0002V Gadelaza.[15][21][23][24]

A huge beam cannon hidden in the center front section during MA form, it is located underneath the chest-mounted cockpit during MS form.[4][7][9][25] While the muzzle of this highly destructive weapon is exposed in MS form, in MA form, the center front section of the Regnant has to split open to reveal the cannon's muzzle for firing.[2][4][9][25] The GN Beam Cannon not only possess the highest firepower among all the Regnant's armament, its fired beam can also curve to a certain extent, making it difficult to evade.[3][4][7][9]

The ten red claws on the Regnant's hands are capable of piercing through the armor of a mobile suit and can be launched as remote-controlled weaponry called "GN Fangs" or simply "Fangs".[4][19][26][27] Operating primarily in the medium-range combat zone, the Fangs can conduct all-range attacks in which they assault one or more enemy units from multiple directions at once.[2][19][26][27] The Fangs have two ways of attacking: 1) ramming into enemy machine, slicing it into pieces, and 2) they are equipped with a built-in beam cannon each, allowing them to fire beams from a rectangular opening at the bottom.[12][19][26][27] Each Fang has a rear-mounted thruster that can pivot up and down to a certain degree.[3][7][12] There are some design differences among the Regnant's ten GN Fangs, which can be categorized into three different groups according to their shape, but they all have identical basic performance.[7][12][27]

A special electromagnetic whip, one is mounted in each of the Regnant's palm in the form of a wire-linked white capsule.[3][4][8][9] When used, the wired capsule is launched from the palm, and once it is in proximity with an enemy machine, four more wires are released from the capsule's tip in different directions to capture/restrain the enemy.[2][3][4][9] Furthermore, electrical energy is transmitted across the whip to electrocute and directly injure the enemy pilot.[4][9][11][25] It is possible to launch the four wires from the capsule's tip at the enemy without deploying the capsule itself.[25][28] The Regnant was shown to be able to capture/restrain three enemy units simultaneously by using both Egner Whips.[9] An earlier model of the weapon is used by the Regnant's prototype, the GNMA-Y0001 Empruss, with the capsule demonstrating the ability to penetrate GN Field barrier.[3][8][29]

The two huge wings of the Regnant can function as Anti-ship GN Swords.[4][13] The pair of huge swords enable the MA to slice apart enemy ship or unit as it passes by at high speed.[4] The swords are also capable of blocking the GN-0000+GNR-010 00 Raiser's new GN Sword III, which has a blade with improved cutting capabilities.[8][25][26][28]

Like its prototype, the GNMA-Y0001 Empruss, the Regnant can deploy a spherical GN Field barrier around itself for defense.[4][6][9][30] Created using a large amount of compressed GN Particles, this barrier has high defensive power and can block most physical and beam attacks.[4][9][19][20] The Regnant's GN Field is strong enough to even nullify the GN-008 Seravee Gundam's Hyper Burst attack, but it is not impenetrable, and can be pierced by, among others, certain melee weapons such as the GN-0000+GNR-010 00 Raiser's GN Sword II.[9][19][20]

The operating system of the Innovators' GNZ series MS (such as the GNZ-003 Gadessa) is linked to Veda, allowing these machines and their pilots to receive support from the quantum processing system, enhancing their performance.[8][25][31] This likely also applies to the Regnant.

A system that allows a mobile weapon's pilot to control the machine's remote weaponry.

Shortly after receiving the Regnant, Louise launched in the mobile armor alongside the Innovators' GNZ-003 Gadessa, GNZ-005 Garazzo, and GNZ-007 Gaddess for an attack on the Celestial Being's carrier spaceship, the CBS-74 Ptolemaios 2. The battle started with Regnant firing its GN Beam Cannon several times, putting the GN-006 Cherudim Gundam, GN-007 Arios Gundam, GN-008 Seravee Gundam, and the GNR-101A GN Archer on the defensive as the cannon's curving beams made the attacks difficult to evade.

After the Gaddess lured the Cherudim into a one-on-one duel, the Regnant, the Gadessa, and the Garazzo continued engaging the other three mobile suits. When the Seravee launched its Hyper Burst attack at the Gadessa and Garazzo, the Regnant moved in front of both units and protected them with its GN Field. The mobile armor then fired its GN Beam Cannon again, and vaporized the Arios' left arm as the Gundam's pilot was distracted and could not dodge in time. The Gadessa and Garazzo later broke through, while the Regnant stayed back and restrained the Seravee, Arios and GN Archer with its Egner Whips.

Episode 21: The Door of Change

Once the Regnant was repaired, Louise received special orders to sortie together with Mr. Bushido and his GNX-Y901TW Susanowo. Arriving outside the Eclipse space colony in Lagrange 5, the Susanowo fought the 00 Raiser, while the Regnant battled the GNW-003 Gundam Throne Drei, the Gundam that killed Louise's parents four years ago. The Regnant launched a pre-emptive attack with its GN Beam Cannon, destroying the Throne Drei's left arm. The Throne Drei subsequently lost both legs to a second shot from the cannon after being caught off guard by its curving beam. The Regnant then approached the Throne Drei in its MS form, and the Gundam fired its GN Handgun to stop the mobile armor, but to no avail. Using its GN Fangs, the Regnant made short work of the damaged Gundam, turning it into a defenseless wreck. For the final blow, the Regnant plunged its right claws into the mobile suit, piercing its cockpit and causing the machine to explode.

Episode 22: For the Future

The A-Laws finally gathered all its available units to wipe out the Celestial Being, but the Innovators and their mobile suits, along with Louise and her Regnant, were recalled by the leader of the Innovators Ribbons Almark and left the fleet. Andrei Smirnov and his GNX-704T Ahead followed behind the mobile armor as he was worried about Louise.

With the A-Laws on the brink of defeat by the combined forces of the Celestial Being, Katharon and the ESF Coup d'état forces, the Innovators joined in the battle and revealed the colony-class deep space mothership Celestial Being. Accompanied by Andrei's Ahead, the Regnant launched to defend the huge mothership and soon encountered the 00 Raiser. The Regnant fired its GN Beam Cannon several times and the Ahead attacked with its GN Submachine Gun, but all these shots were evaded by the 00 Raiser.

After the Ahead was damaged by a beam shot from 00 Raiser's GN Sword III, the Regnant deployed its GN Fangs. Although the GN Fangs surrounded the mobile suit and assaulted it with beam shots from various directions, they could not hit the 00 Raiser and were sliced apart by the latter's GN Sword III when they attempted to ram and slice it. The Regnant then charged at the 00 Raiser and crossed swords with the mobile suit using its left Anti-ship GN Sword.

Pushing the 00 Raiser away, the Regnant transformed into its MS form and launched its right forearm's GN Micro Missiles. Some of these missiles were intercepted by the 00 Raiser, while others were evaded by the mobile suit. Andrei's damaged Ahead then intervened and shot at the 00 Raiser, but was easily defeated. However, this attack also distracted the 00 Raiser, allowing the Regnant to restrain and electrocute the mobile suit with its Egner Whips. The mobile armor followed up by firing its GN Beam Cannon, forcing the 00 Raiser to block the beam shot with its side binders. At around the same time, a trio of GNZ-004 Gagas launched a suicidal charge at the two machines.

In a desperate attempt to defeat the 00 Raiser, the Regnant embraced the mobile suit tightly to ensure it could not escape from the Gagas' attack. The 00 Raiser then fired its GN Micro Missiles, destroying two of the three Gagas. The lone surviving Gaga continued charging and rammed into the Regnant, causing a huge explosion that, knocked out Louise and badly damaging the upper body of the mobile armor, but the 00 Raiser was relatively unharmed. Louise was then removed from the Regnant's cockpit and taken away by the 00 Raiser's co-pilot, Saji Crossroad, who was Louise's former lover.

In the aftermath of the Innovators' defeat, the Regnant's wreckage was discovered by the Earth Sphere Federation Forces' GNX-609T GN-XIII units patrolling the vicinity of the huge mothership Celestial Being. A transport ship was then dispatched to recover the damaged mobile armor so that its technology could be analyzed and used to advance the development of the Earth Sphere Federation Forces' GN Drive Tau-type mobile suits. 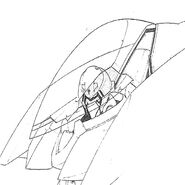 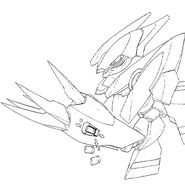 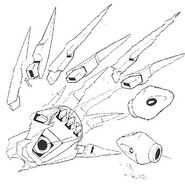