The GN-9999 Transient Gundam is a Gunpla from Gundam Build Fighters Try. It is built and piloted by Wilfrid Kijima.

Used by team Celestial Sphere's team leader, Wilfrid Kijima, the Transient Gundam's design is based on the various GN Drive-equipped mobile suits appearing in Mobile Suit Gundam 00. The Gunpla's weaponry consists of up to two double-edged spears known as GN Partizans, and a pair of wrist-mounted GN Vulcans that can also function as GN Beam Sabers. The GN Partizans function as both melee and ranged weapons, and each can also act as one large Lance Bit or separate into two small Lance Bits. The Gunpla is also equipped with a GN Field for defensive purposes, and its trump card is the Transient Burst - a customized system that grants the Gunpla increased combat performance for a time. While airborne and in space, the Transient Gundam's feet are folded up.

A double-edged spear, the GN Partizan is a melee weapon with versatile uses. When swung, it can either fire a series of homing/curved beam shots or a large crescent-shaped beam. The GN Partizan can transform into a dedicated shooting form when the larger spear tip opens up. In this form, the GN Partizan can rapid fire standard beam shots or charged up for a beam cannon-like blast depending on how much the spear tip spreads apart. It can also function as a large Lance Bit or separate into two small Lance Bits. Furthermore, the weapon can be used for defensive purposes. It is capable of blocking both physical and beam attacks, and a makeshift Defense Rod with GN Field-like capabilities can be formed when the GN Partizan is spun rapidly. When required, the Gunpla can be equipped with two of these weapons and by crossing them, a series of lightning bolt-like attacks can be released.

Each GN Partizan can function as a large remote controlled weaponry known as lance bit that can separate into two small lance bits. Regardless of the size, the lance bits are mainly used for close combat, but they also retain the GN Partizan's ranged combat capability.

Located on the wrists, the GN Vulcans are smaller versions of GN Beam weaponry. They have a high rate of fire, but are low in power. As a result, they are mainly used as secondary ranged weapon or as defensive weapons for shooting down missiles, etc. The GN Vulcans can also generate GN Beam Sabers for close combat, and these GN Beam Sabers are used together with the small lance bits to perform the Gunpla's killer move.

A custom GN beam rifle used by the Gundam Portent, it is given to the Transient Gundam by Shia for use in the overtime battle during the finals of the U-19 Championship.

A particle-based defensive barrier used by mobile suits powered by a GN Drive, the GN Field is capable of blocking most beam and physical attacks.

A particle emission system, it drastically enhances the power of the Transient Gundam when activated. When the Transient Burst is used, the entire Gunpla glows blue and three energy wings are generated from the three clear blue parts on the back. 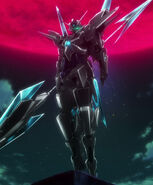 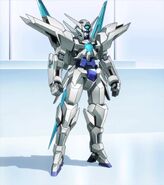 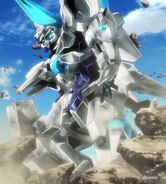 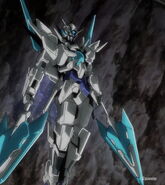 Transient Gundam Lineart
Add a photo to this gallery

Retrieved from "https://gundam.fandom.com/wiki/GN-9999_Transient_Gundam?oldid=475121"
Community content is available under CC-BY-SA unless otherwise noted.