The GN-1001N Seravee Gundam Scheherazade (セラヴィーガンダムシェヘラザード, , aka Scheherazade?) is a Gunpla that appears in the Gundam Build Divers series. Based on the GN-008 Seravee Gundam, it is built and piloted by Shahryar.

A custom Gunpla based on the Seravee Gundam.[1] This is a high-performance machine with high mobility despite its large body, and high firepower created through the genius assembly skills of its builder, Shahryar.[1][2] However, its true value lies in the hidden gimmicks, which have been passed down from the Seravee and its ancestor, the GN-005 Gundam Virtue.[1][2]

A refurbished handheld physical projectile weapon from Gundam Virtue's alternate armament plan.[2] A stay is added to the weapon, helping to fix it to the forearm when in use, reducing recoil and improving accuracy during shooting.[2]

Long range beam cannons are built into the Ptolemaios Arms' four containers, which are located on the waist and back in the Scheherazade's "Jinn Mode".[2][3] The GN Beam Containers can fire through the front white piece either standard pink beams or uniquely colored beam from each container that can combine into a larger multi-colored beam.[3][4]

The GN Beam Container can also function as handheld melee weapon; its back can be unfolded, revealing claw units for close combat.[2] Furthermore, the base of the claws can be shot out for dealing with enemies at a distance.[2]

A barrage of GN Missiles can be fired from the body of the Ptolemaios Arms.[3]

A beam cannon is hidden in the nose of the Ptolemaios Arms.[3]

Scheherazade's maximum firepower attack.[2] The entire Ptolemaios Arms is held in front of the Gunpla via a pair of unfolded side grips near the back of the support unit, and a strong GN particle beam is fired from the unit's nose beam cannon.[2][4] Also known as the 'Bombardment Mode' of the Ptolemaios Arms.[4] Before attacking, Shahryar will utter the phrase "Blow simoom! Alf layla wa-layla!" or "Blow, desert! One thousand and one nights!"[5][6]

Captured from an enemy unit, it is a spear-like weapon with several beam blades at the top.[7] Due to its long handle, the weapon has a long reach, providing considerable advantage in close quarters combat. It can also be used as a throwing weapon.

A multi-purpose support unit based on the Celestial Being's tactical mothership, the CBS-70 Ptolemaios, it also shares the same nickname 'Ptolemy'.[2][3][4] As it was built by the world famous Gunpla Builder, Shahryar, it has high workmanship and high extensibility, being able to attach to other kits besides the Scheherazade.[8] On its own, it has outstanding cruising abilities, and can be used as long-distance transport for divers, where one diver serves as the pilot and another as the gunner.[2][3] Each of its sections can also serve as armed units when docked to the the Scheherazade, giving the Gundam various attack options.[2] It is armed with four GN Beam Containers, a beam cannon in the nose and can fire multiple GN Missiles.[3] The entire unit can also be used as a weapon - the GN Ptolemy Cannon.[2]

Depending on where the sections of the Ptolemaios Arms attach to and their usage methods, Scheherazade can switch between two modes. The middle to long-range combat "Jinn Mode" has the Ptolemaios Arms' A Unit (the front section) attaching to the back, the B Unit (the rear section) attaching to the rear waist, and the C and D Units (the two bottom GN Beam Containers) attaching to the sides of the rear waist.[2][3][4] For the close to mid-range combat "Efreet Mode", the two bottom GN Beam Containers are used as handheld GN Claw Containers, the A Unit attaches to the back, a part of the B Unit attaches to the rear waist while the other parts attach to the Scheherazade's feet, lengthening its legs.[2]

A system that improves the Gunpla's specifications more than three-fold when activated, and as a side-effect, the unit glows red during this time. However, once the system reach its activation time limit, the Gunpla's mobility drops greatly until the stored particles are recharged. 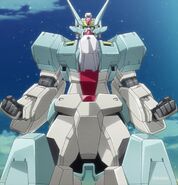 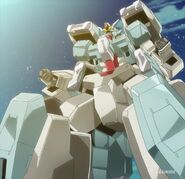 With Gundam Jiyan Altron and Gundam Love Phantom vs. the Coalition's gunplas (Ep 24) 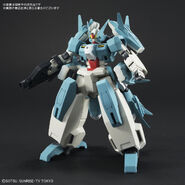 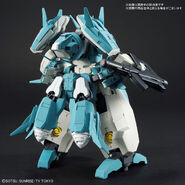 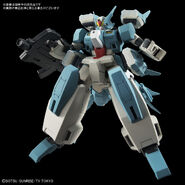