The GN-10000 Transient Gundam Glacier is a Gunpla from Gundam Build Fighters Honoo Try. It is built and piloted by Lindsey Anegaozy.

Double-edged spears that serve as the Gunpla's primary weapons. The pair of GN Partizan II can function as close combat weapons as well as compress and launch Plavsky Particles for long-range attacks during slashes. Successful attacks will drain the target's molecular motion energy. The GN Partizan II can also separate at the mid point of the grip into two blades that can be handheld or mounted on the forearms, above the GN Vulcan/GN Beam Saber.

Mounted on the wrists, the pair of GN Vulcans fire beams at a high rate, but are low in power. Thus, they are mainly used as secondary ranged weapon or as defensive weapons for shooting down missiles, etc. The GN Vulcans can also generate GN Beam Sabers for close combat, which freeze anything they cut.

The cone-shaped parts on the back of the unit generate particles that are stored in purple crystals located around the unit. This allows the unit to stockpile particles and have higher particle output than most other Gunpla. The crystals also keep the particles at near absolute zero temperatures, allowing the Gunpla to use freezing attacks.

The Transient Gundam Glacier is created by Lindsey Anegaozy, a member of the second team at Gunpla Academy. During a practice test at the Nielsen Labs, Lindsey and fellow team member, Yunta Aoi, was joined by a researcher of the labs, Gabriel Gish, to form Team Lapis Lazuli. The team is named after a type of bright blue stone, a reference to the fact that all three members used bluish/purplish Gunplas. 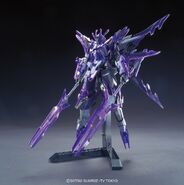