The GN-011 Gundam Harute (aka Gundam Harute, Harute) is the successor of GN-007 Arios Gundam introduced in Mobile Suit Gundam 00 The Movie -A wakening of the Trailblazer-. It is jointly piloted by Allelujah Haptism and Soma Peries.

Designated as a 5th generation Gundam, the Gundam Harute is the latest in Celestial Being's line of transformable mobile suits. Harute's overall design is derived from the combined technical and combat data of GN-007 Arios Gundam, GNR-101A GN Archer and GNR-010/XN XN Raiser. Because Celestial Being no longer had the resources it used to develop brand new units, they decided not to design a new unit and instead based Harute directly from Arios's and GN Archer's development platforms (recycling its predecessors' MS frame design); however, due to upgrades in new equipment and weapons, Harute's capabilities are significantly greater over its predecessor.[1]

One of the most unique features of Harute is its cockpit. It is more compact than Arios', but made to be utilized by two pilots. It's a two-seat cockpit control system, the first of its kind amongst Gundams. The cockpit controls are delegated between Soma and Allelujah. The controls are built similar to 21st century fighter cockpits, both seats have helm controls for co-use and support. While Allelujah focuses on aerial combat tactics, Soma focuses on weapons and systems control. Because of their quantum brainwaves, they can communicate, delegate commands, and change tactics between each other and Harute beyond what normal humans can do. The combined abilities of the two super soldiers are capable of bringing out the full potential of Harute's speed and firepower, making it a formidable enemy in combat.

Harute's fighter form was developed from Archer Arios. The thrusters are derived from GN Archer, the rear GN Missile Container from Kyrios' Tail unit, its weapons system from XN Raiser, and the forward section mostly from Arios. Harute's design is a departure from Kyrios and Arios, though the previous two generations were capable of operating in outer space, they were designed primarily for atmospheric combat. Harute reverses this trend, redesigned as a zero-gravity fighter.

Harute has a less aerodynamic design than its predecessors, but it can achieve far greater speeds. This is due to six thrusters acting as its primary means of propulsion to create large bursts of acceleration. In addition, two GN Boosters can be attached onto its legs, giving the unit greater speed and possibly mobility in both modes. Due to the fact that it was built with heavy equipment in mind, its mobility is inferior to that of the Brave series.[2]

Many aspects of its weapons and technology were derived from the incomplete XN Raiser project. Like XN Raiser, Harute's GN Sword Rifles double as wings and cleavers in its fighter form. When launched from Ptolemy, the wings remained folded upwards to adjust its limited space. The rifles attached to the wing are retractable; they are fixed particle guns for cross-firing. The blade-wings allow Harute to cut and/or gouge through enemy targets on either side of its wings.

GN Archer's head sensor and propulsion system survived and evolved onto Harute's frame; new MS developments have miniaturized the GN Verniers, making the entire system smaller and allowing more space for other systems. The original large intake ports have been replaced with a pair of GN Cannons, capable of acting as heavy level beam armaments. In addition they also act as a container for its GN Scissor Bits to help Harute manage against superior enemy numbers. 5 more GN Scissor Bits can be optionally stored in each leg of the GN Boosters.

The sides of the thrusters no longer double as GN Missile containers like the GN Archer. The GN Missile container has 12 VLS missile silos that can fire volleys of GN Missiles in combat, usually against long-ranged targets and double as countermeasures against enemy fire. Once depleted, Harute can jettison/eject the container and even make it act as a bomb onto pursuing enemies.[3]

When transforming, the thrusters are folded diagonally back at its sides, with the head sensor unit and the GN missile container folding back to allow flexible mobility for MS combat. The bottom forward armor plating folds down to form the chest. Its forward guns and blades can be attached to the side of the thrusters or deployed forward in mid-transformation for immediate attacks.

One revolutionary feature of Harute is the Marute Mode, a special mode that accommodates a three-pilot control simultaneously[2] presumably with the net result of improving performance. Overall, Harute represents the pinnacle of CB's transformable Gundams, able to draw out the latent abilities of its super soldier pilots, becoming a force to be feared on the battlefield.

Harute possess two large GN Cannons mounted on its back. They have been shown to be capable of firing powerful beams with minimal time lag in Fighter Mode, and are usable in MS Mode. Although they are often seen firing in rapid succession, they can also fire a more powerful beam combined with the GN Sword Rifles' outputs with a slightly longer time lag.

At port and starboard, the rear top part of the GN Cannons have 2 compartments that contain 5 GN Scissor Bits in each one, totaling 10 bits. These bits are literally flying scissors with cutting edges lined with the same material as the blades of the GN Sword Rifles. This allows them to store large amounts of GN Particles to greatly increase their damage potential. As melee-type bits, these weapons were designed to move at extremely high speeds to offset their complete lack of ranged-attack capabilities; while in action, they can only be seen as orange and glowing green blurs. Because of new developments in GN Tech, the bits have higher performance and reduced need to recharge with Harute. Ten more can also be equipped with Harute's GN Booster upgrades.

Harute carries two GN Sword Rifles that can also function as wings in Fighter Mode. The rifle itself is a retractable gun that slides up and down (at the top handle-end of the weapon) for quick transition between modes. The GN Sword Rifles can also be used as pincer-like weapons for grabbing and bifurcating enemy units similar to Arios' pincer/cutter weapon. In Pincer Mode, they resemble straight-blade scissors rather than Arios and Kyrios's claw-like pincers. The weapons' Sword Mode was derived from the XN Raiser's GN Buster Sword design and the newer and more advanced green blade material design for more power. Unlike Kyrios and Arios, Harute by default is equipped with two primary rifles which was trial tested on the Arios on some occasions.[2]

Derived from the GN-003 Gundam Kyrios's Tail unit. It is mounted on the back of the waist and can be ejected to decrease weight.

The Marute Mode (named after its angelic counterpart) is acombat mode as well as a 3 co-processing operating system designed that allows the three pilots to control Harute simultaneously.[2] The crown forehead and under its primary optics reveal 4 additional eyes, totaling 6 red MS eyes.

Enhanced propulsion technology derived from GN-003/af-G02 Gundam Kyrios Gust. A pair of GN Boosters can be installed onto the Harute's legs, granting the unit greater speed and maneuverability for combat. The boosters also have 2 compartments at the knees that contain 5 additional GN Scissor Bits each.

Note: The Harute's history and exploits can be found on either Allelujah Haptism's or Soma Peries's pages. 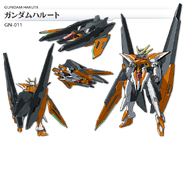 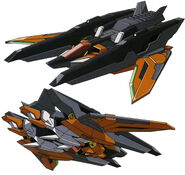 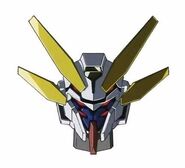 Wreckage being assimilated by ELS 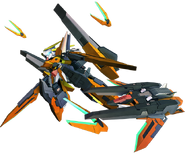 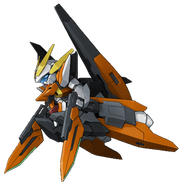