The GN-010 Gundam Zabanya (aka Gundam Zabanya, Zabanya) is the successor unit to GN-006GNHW/R Cherudim Gundam GNHW/R introduced in Mobile Suit Gundam 00 The Movie -A wakening of the Trailblazer-. It is piloted by Lockon Stratos.

Classified as a fifth-generation Gundam,[1] Zabanya's overall design is derived from the technical and combat data of GN-006 Cherudim Gundam. In order to conserve resources, Celestial Being engineers decided not to create an entirely new Mobile Suit but instead based Zabanya directly from Cherudim's development platform (recycling its predecessor's MS frame design), which limits it's technological development. However, as a result of upgrades in new systems, equipments, and weaponry, Zabanya is a power-up over its predecessor.[2] Unlike Cherudim, its GN Drive is stored inside the chest instead of the rear end.[1]

Zabanya is a departure from its lineage as a long-ranged sniper, placing more emphasis on mass fire tactics while still retaining its sniper capabilities. The reason why this was done was because Dynames and Cherudim were designed with Neil Dylandy's sniping-oriented preferences in mind while the Zabanya was designed with Lyle Dylandy's more direct combat preferences.[1] The emphasis on dealing with multiple targets was an idea that arose during the power play conflict with A-Laws and the Innovators.[1]

The gun camera on the forehead, inherited the cover opening and closing method of Cherudim and the antenna lowering method of the Dynames. Both shoulders and legs have built-in sensors that function the same as the gun camera, and when the gun camera as well as these sensors are deployed all at once, a special screen would appear in the cockpit to facilitate targeting and shooting of multiple enemy units simultaneously. Zabanya's predecessors, Dynames and Cherudim, utilized a single Orange Haro for support, but because of the complexity of managing its weapons systems, a second Haro port was installed into Zabanya's cockpit. A blue-colored Haro now co-processes the data with its orange counterpart to allow Lockon to effectively pilot Zabanya.

Weapons-wise, the GN Missile Pods are laced under its expandable green armor plating and the GN Rifle Bits II contained within the GN Holster Bits. The GN Holster Bits are attached to Zabanya's rear with a docking-clamp system and the bits are interlocked with each other on its sides. For dynamic shielding, the clamps can swivel the GN Holster Bits in various positions for optimum defense and the bits can detach and combine into pairs to protect Zabanya. When facing superior numbers, Zabanya can unleash the GN Rifle Bits II from within the GN Holster Bits, allowing Zabanya to fight off 10+ targets at the same time. The Rifle Bits II can be reconfigured as GN Pistol Bits II by removing the long barrel. Like the Cherudim's GN Beam Pistol IIs, the Zabanya's GN Pistol Bit IIs have anti-beam coated blades under their barrels to block beam and physical melee attacks.

Using its GN Missile Pods and its array of GN Pistol Bits/Rifle Bits II, Zabanya can utilize en masse firing tactics to quickly and systematically annihilate large groups of enemies. When greater firepower is needed, the Holster Bits can configure themselves into various configurations with the Rifle/Pistol Bits II, able to take out an army of enemies. For additional firepower, Zabanya can equipped an additional 4 GN Holster Bits onto its back. The overall capabilities of the Zabanya can be enhanced by the Trans-Am System.

An interesting change in pilot interface was that instead of a manually operated rifle control module as with the Zabanya's predecessors, the Zabanya instead has two pistol-grip controllers installed. This was most likely done due to its new emphasis on artillery tactics rather than precision sniping. The removal of the large rifle control module gives the pilot more room in the cockpit, as well as a larger perspective of the battlefield.

The GN Holster Bits[3] are the ten green shield-like containers mounted on the Zabanya's rear thruster blocks. They are used for storing and re-configuring the mode of use for the GN Rifle Bits II/GN Pistol Bits,[4] allowing the pilot to adapt the weapons for various combat situations.[4] The GN Holster Bits also has the ability to act as GN Shield Bits[3] when two of them are paired together to form the shield unit. Like GN Shield Bits, the GN Holster Bits can also arrange themselves into specific formations for offensive purposes, and the GN Rifle Bits can be incorporated into said formations for additional firepower. Zabanya can load up four more GN Holster Bits onto its back for additional offensive and defensive capabilities.

Like the Dynames and Cherudim, Zabanya has a complement of GN Missiles for use as emergency countermeasures or as additional firepower. However, the Zabanya mounts a much larger number of missiles, with a total of 76 missiles stored in its shoulders, forearms, chest, front skirt, legs and feet. Once the GN Missiles hit their targets, they would release GN Particles to destroy enemies from the inside. Once Zabanya unloads its payload of missiles, it jettisons most of its armor to remove the dead weight of the empty missile ports.

A GN Rifle Bit II is stored within each GN Holster Bit. When facing formidable forces, Zabanya can use the rifle bits as either hand-held rifles or remote weapons to adapt to the combat situation. The weapon can also act as a pistol with a shorter barrel, named GN Pistol Bit, [3] with the scope and grip hidden. The pistol and rifle bits can also arrange themselves into different shape formations, firing a concentrated beam, or numerous smaller beams to attack multiple targets. The pilot has the choice of choosing between either a pistol or a rifle (via the inclusion/exclusion of the extension) before the weapon exits the Holster Bit.[4] The white section on the underside of the barrel is an anti-beam coated blade that can be used to block enemy's close combat weapon, similar to Cherudim's GN Pistols II.

Note: Zabanya's history and exploits can be found on Lockon Stratos's page.

In Gundam EXA, Gundam Zabanya is used against Leos Alloy's Extreme Gundam Type Leos Xenon Phase prior to the encounter with the ELS. As the suit's armament is still undergoing adjustments, it is deployed docked with the GN Arms Type-D. 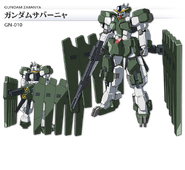 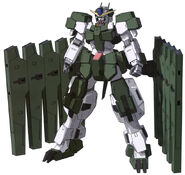 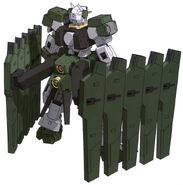 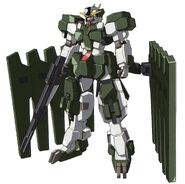 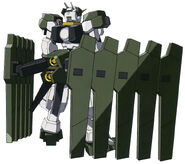 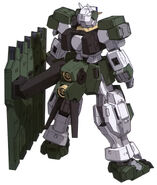 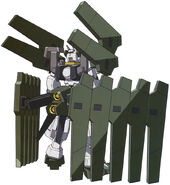 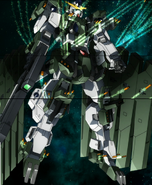 Firing a volley of beams

After final battle with ELS 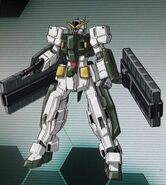 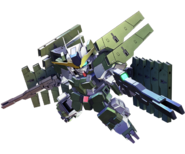 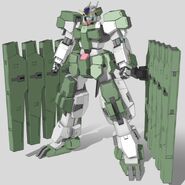 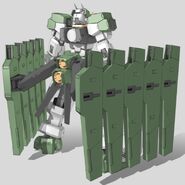 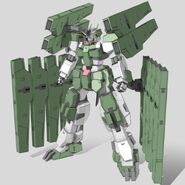 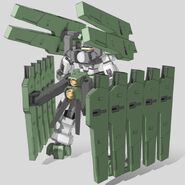 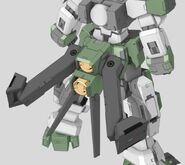 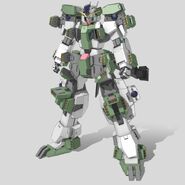