In most combat situations, the unit remains as a weapons backpack that provides GN particles for GN Field generation and Seravee's weapons. In situations when Seravee needs help and can't finish an opponent alone, the backpack of Seravee can transform into Seraphim Gundam. The lower thrusters reveal legs, the back face functions as its torso and body, and the top cannons can interchangeably transform into MS arms; its manipulators have two thumbs, one on the top and bottom of each hand, allowing it to operate in both directions. Seraphim is often used as a last resort measure and trump card in combat. Unless Seravee is severely damaged or at a disadvantage that Seraphim can compensate for, the Gundam remains hidden as backpack until needed.

When separated, the GN Drive remains on Seraphim[1] while Seravee becomes an attack drone that assists Seraphim in the battle.[1] Seravee is able to do this because it possesses a high storage capacity of GN Particles that can last for a certain amount of time.[1] Before the separation occurs, the pilot's chair inside Seravee transfers to an alternative cockpit inside the Seraphim which is then used for its piloting operations.[2]

As the successor to Gundam Nadleeh, Seraphim is capable of high speed combat and not dependent on weapons from Seravee as Seraphim has built in weapons. Seraphim's arms are GN Cannons and can switch between forms for shooting or melee combat, either by empty hand or beam sabers stored in its arms. Seraphim is also capable of penetrating GN Fields to destroy enemy targets with its GN Cannons. When a formidable MS opponent overwhelms Seravee, Tieria can move Seravee in very close proximity of the opponent MS and grab hold of the enemy with its four MS hands. Once fully secured and unable to escape, Seraphim would be deployed to finish off its opponent. If the opponent is formidable, Trans-Am can be activated in between Seravee and Seraphim to assure victory. Seraphim also possesses the ability to use Seravee's GN Bazooka IIs,[1] however because Seraphim's total particle storage capacity is lower compared to Seravee,[1] the power of the weapon when used by Seraphim is reduced.[1]

Just like Nadleeh, Seraphim inherited the Trial System as a countermeasure against enemy forces that would misuse Veda to their benefit; Seraphim is unable to utilize the system without first reclaiming Veda. CB engineers originally planned additional production of Seraphims to increase the effect of Trial in combat, GN-008GNHW/3G Seravee Gundam GNHW/3G, but the plans were scrapped after feasibility issues.

An armament for close combat, with one stored in each arm. Just like the GN Cannons, the sabers can be used in either backpack or mobile suit mode.

Either in its backpack configuration or as a mobile suit, the Seraphim's primary and most powerful weapons are the GN Cannons located within its arms. In cannon configuration, the hands fold into the barrel. Each GN Cannon is capable of firing a powerful beam that can destroy a mobile suit or significantly damage a larger target.

A weapon borrowed from the Seravee Gundam. However, since this machine is not equipped with a large GN condenser, its power is reduced.

Seravee's rear has a hidden face behind its back, the hidden backpack form of Seraphim. Since Seraphim contains the GN Drive, it disperses excess GN particles when needed and stores the particles when Face Burst Mode isn't needed. When high GN particle output is needed, a second Gundam face reveals itself hidden under the armor pack. When the second face reveals, the lower sides of its face vents large amounts of GN particles necessary for immediate GN Field generation/regeneration and works in conjunction with Seravee's GN particle weapons for higher destructive yield. The GN particle vents also provides additional thrust for maneuvering and hauling. Face Burst Mode is the most actively used function of Seravee. For Seraphim, Face Burst Mode activates in conjunction with Trial.

A system that generates an invisible field, shutting down any mobile weapon that's connected to Veda in the field's effective range. The development of the GN-004/te-A02 Gundam Nadleeh Akwos has expanded the effective range of the trial system. Its scope is enough to cover the entire area of Lagrange 2.

Seraphim made its debut when Tieria/Seravee was locked in a heated battle with Bring Stabity and his GNZ-005 Garazzo. Tieria/Seravee disabled his GN Field to grab Bring/Garazzo by the shoulders and leg, giving Tieria time to activate Trans-Am and switch to Seraphim Gundam. Bring quickly deployed Garazzo's GN Tau Field, hoping that Tieria would not fire on not only his own MS but on a fellow Innovade. However, Tieria/Seraphim broke through the GN field, activated the arm mounted GN Cannons and fired point blank on Bring, killing him.

Seraphim was deployed a second time during a space battle in which Tieria/Seravee destroyed Revive's current Gadessa. The Innovator survived the attack and attempted to escape in the Gadessa's escape pod. Tieria would not allow Revive to escape as Celestial Being currently had an objective to capture an Innovator, so he deployed Seraphim to chase after the pod. The Gundam successfully captured the escape pod, although Revive's smirk would imply the Innovade wanted to be capture. However the fact that Tieria sent Seraphim after the escape pod implies that it is capable of greater acceleration than its partner unit Seravee.

The Third and final time Seraphim was used was during the Battle of Celestial Being. After Tieria had been killed by Innovators' leader Ribbons Almark, Tieria transferred his consciousness within Veda and remotely activated Seraphim via quantum brainwaves. Seraphim then activated Trial Field, disabling all the Innovators MS that were linked to Veda for a short while until it was destroyed by Ribbons' CB-0000G/C Reborns Gundam/Reborns Cannon. Not only was Seraphim Gundam lost, Celestial Being also lost 0 Gundam (A.C.D. Colors), GNHW/B Seravee Gundam and their GN Drives as well. 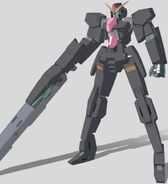 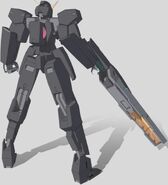