The GN-008GNHW/3G Seravee Gundam GNHW/3G is a proposed upgrade to Seravee that was never implemented. The unit was featured in Mobile Suit Gundam 00V.

A form where the Seravee Gundam is equipped with one of the GN Heavy Weapons developed for use against the Innovators. It is intended for wide-area deployment of the Trial System. Two SEM units, unmanned versions of the Seraphim Gundam, have been added to its back. These two machines and the Seravee can be separated and controlled by quantum brainwaves from the Seraphim, and their remote control distance is theoretically infinite. Although there is a limit to the effective area of the Trial System, it is possible to cover an area of several hundred kilometers by deploying the Seraphim and the two SEM units, effectively covering the entire battlefield. Its development was rushed as a trump card for the final battle against the Innovators, but in addition to the difficulty of manufacturing the two SEMs, there was a fear that they would be mere dead weight and would even be shot down before Veda was recaptured. Seravee eventually sortied in the final battle with the second plan, GNHW/B.

The pair of GN Bazooka IIs is an overall improvement over Virtue's GN Bazooka and has multi-function capabilities. While they can be fired separately, they can also combine into a single powerful weapon, the Double Bazooka. The GN Bazooka IIs can also be used in conjunction with the GN Cannons in multiple ways, enhancing its firing power and range.

Seravee Gundam GNHW/3G has a total of 10 beam sabers, 2 in its forearms and 8 hidden within its GN Cannons. All these beam sabers have the same level of power, with the hidden units only used in dire situations.

Four cannons equipped on the knees and back. When all four is fired simultaneously as "Quad Cannon Mode", its destructive power exceeds that of a mobile suit. A hidden ability of the GN Cannons are that they double as transformable MS arms, with their own beam sabers for melee combat. The 3G enhancements add four more GN Cannons, mounted on the two SEM units. These units dock on Seravee's back and face the sides.

A small beam gun specifically designed for the Seraphim and the SEM. It can be stored on the knee when it is not being used.

A small shield stored on the SEM's left knee. It is an improved version of Cherudim Gundam's GN Shield Bit, and retains the built-in beam gun. However, it cannot be operated remotely and is handheld when in use.

Buster Cannon is the combination of a GN Bazooka II attached to one of the back-mounted GN Cannons for increased firing range and firepower.

Twin Buster Cannon is the combination of both GN Bazooka IIs attached to both back-mounted GN Cannons for increased firing range and firepower.

Double Bazooka is the combined form of the GN Bazooka IIs which resembles Virtue's GN Bazooka.

Double Bazooka Burst Mode is when the Double Bazooka expands its barrel to fire powerful projectile particle orbs. Seravee can activate Face Burst Mode for added particle charge to fire. At times when needed for immediate firing, Trans-Am can be used for Seravee to fire multiple shots or for one powerful shot.

Hyper Burst is Seravee's most powerful particle weapon attack. Double Bazooka Burst Mode is used in conjunction with all four GN Cannons. When Trans-Am and Face Burst Mode are activated, the size of Burst Mode's particle projectile orb is much larger.

Seravee has a hidden face in its back, which is actually the backpack form of Seraphim. Since Seraphim contains the GN Drive, it dispenses excess GN particles when needed and stores the particles when Face Burst Mode isn't used. When high GN particle output is needed, this hidden Gundam "face" reveals itself. When this second face reveals, the lower sides of its "face" vents large amounts of GN particles necessary for immediate GN Field generation/regeneration and works in conjunction with Seravee's GN particle weapons for higher destructive yield.

GN Field is the most deployed function of Seravee next to Face Burst Mode. The suit can generate a GN Field Barrier on its own without Face Burst Mode. Unlike Virtue, which required GN particle vents for its GN Field, the Seravee's new armor do not have such a requirement. The GN Field isn't as effective against enemy units since the Federation has GN weapons of their own. As a countermeasure, the GN Field often operates in conjunction with Face Burst Mode to increase its GN Field strength and density. When executed together, the emitted particles vent out a white-green color hue and the particle mass is so thick that a person can only vaguely see Seravee through the GN Field.

Virtue's GN Field at times became a liability when facing various enemy units, as there was a lag time between dropping the field to fire its GN Cannons and regenerating the field for protection. Seravee's weapons were designed to work harmoniously with the GN Field and the GN particles can be utilized to enhance their firepower. The GN particles can form a compressed field and ignite into a particle beam when Seravee's GN Bazooka and/or GN Cannons fire. The combination of additional GN particles from the GN Field in conjunction with its particle weapons can enhance the particle beam's destructive yield.

A system that temporarily triples Seravee's performance by releasing highly compressed particles. The suit however will have reduced performance in battle after the time limit expires. Starting with this generation of Gundams however, Celestial Being adjusted the system so the performance drop isn't as extreme compared to before. Due to the fact that the GN Drive is installed on Seraphim, Seravee cannot trigger the Trans-Am System on its own after separation. However it has been shown to be able to "stay" in Trans-Am post-separation as long as the initial activation was done while still combined with Seraphim. 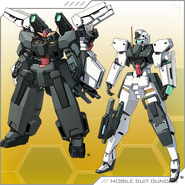 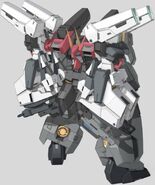 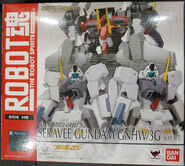