The Arios Gundam Ascalon is one of the proposed GN heavy weapon modifications to Arios Gundam in preparation for the final battle against the Innovators. It is developed by Celestial Being engineer Sherilyn Hyde (a student of Ian Vashti, part of the Fereshte shadow team) but due to balancing and weight issues, it was dropped in favor of the GN-007GNHW/M Arios Gundam GNHW/M, which shares some similarity with the former design.[1]

The Ascalon equipment set intended to make Arios a more general-purpose high mobility machine.[1] The refit added three new sets of weapons: a large GN Sword (inspired by Exia), a GN Beam Cannon (inspired by Virtue), and missile launcher packs on its sides (inspired by Dynames). The Ascalon equipment also granted the Arios with a new nose cone for its MA mode, and it contains an improved sensor unit for better sensing capabilities during high-speed combat. The GN Beam Shield of the original Arios was removed in favor of the GN Beam Cannon, which is installed in the MA mode's new nose cone, the cannon is based on Virtue's GN Bazooka and have comparable firepower. Mounted on top of the nose cone, the GN Sword is used as a ramming/spearing device in high-speed combat. Both of these weapons are usable only in MA mode. The other new weaponry is the GN Missile Launchers, they are also the sole new weaponry to be usable in both MA and MS mode. The missile launchers are later inherited by the GN-007GNHW/M Arios Gundam GNHW/M. Besides this weaponry, the Arios Gundam Ascalon still retains the GN Twin Beam Rifle as its primary weapon and a pair of GN Beam Sabers for melee combat. Arios's forearms also retain its GN Submachine Guns for rapid-fire against enemy targets.[1]

After the events of AD 2312, Arios sustained critical damage from Celestial Being's final battle against the Innovators.[2] With Celestial Being's limited resources and the need for the development of the 5th generation Gundams to maintain its mission, Celestial Being engineers chose to restore Arios and realized Ascalon as it was intended in their original plans. The pre-existing balancing issues that appeared in their data was fixed along with other corrections.[2] Unfortunately, while there were certain improvements (not completely specified), Arios was so badly damaged that its basic performance had decreased even after it had been repaired by Celestial Being.[2] The repaired Arios also can't perform as well as it was intended as it no longer contains a GN Drive. In its place, the suit was fitted with a large GN Condenser where its drive is originally housed. Even though its GN Drive is no longer available, GN Condenser technology had improved and now allows the suit to be operated for a longer time period. For emergency situations, it can still activate its Trans-Am System to increase its capabilities three-fold, however, it is unknown if the Trans-Am still lasts for 3 minutes. In order to decrease its chances of being detected, the suit uses Optical Camouflage while moving on earth similar to the type used by the Ptolemaios 2 in addition to flying in low altitude.[2] In addition, transformation into MS mode is avoided as much as possible in order to conceal its identity.[2]

Located behind the front skirt armor, the beam sabers slide out for Arios to use in melee combat. The beam emitted is sufficiently strong enough to destroy a GN-XIII's lance.

A new weapon added to the Arios Ascalon. The weapon is fixed on the underside of Ascalon's nosecone and is based off the GN Bazooka from the GN-005 Gundam Virtue. While it is only usable in MA mode, it is arguably the most powerful beam weapon in the Ascalon's arsenal. The shoulder binders are now used for compressing the cannon's GN particles and guiding the beam when it is fired.

A new power-up component added onto Arios by Celestial Being engineers. The two missile containers rest at the forward section of Arios in fighter mode and transforms as a missile launcher backpack in MS mode.

Twin-barrelled beam sub-machine guns mounted within the forearms of Arios. The sub-machine guns are usually hidden under the forearm armor of Arios and are revealed when used for rapid firing. These guns have the same performance as the Kyrios' GN Beam Submachine Gun.

A massive blade inspired by GN-001 Gundam Exia's GN Sword. Like the GN Cannon, it is fixed on the nosecone of the MA mode. The sword can be swung forwards for the Ascalon to impale its target when in MA mode.

The GN twin beam rifle is the main weapon of Gundam Arios. It is composed of 2 barrels so it can be fired rapidly for a higher hitting rate. One of the barrels is movable, so Arios can attack the ground when in flight mode. Compared to Kyrios' weaker sub-machine gun, this beam rifle can severely damage, if not destroy a standard mobile suit such as the Ahead.

Sherilyn Hyde of Gundam 00F. She was the one who continued the upload of the test data of the new arms used in the final battle. And then, when the Ascalon was being tested for data, Robert Spacey greeted her saying, "Could I have a minute with you?" Robert came to Lagrange 3, and seemingly was an acquaintance of Ian's. He came to this absolutely secret establishment with the pretext of assisting in development. He personally tampered with the data for simulation of Ascalon and removed almost all of the armaments except for the container. Sherilyn was angry, but when she saw the data, Arios showed a high performance in cooperation with GN Archer which was by far the best it ever had. Even Sherilyn said "Isn't this cool..." and acknowledged Robert's suggestion. Finally, the updated machine with this equipment was called "Arios Gundam GNHW/M".

In 2314, the repaired Arios was then refitted with the Ascalon equipment, which only existed in data previously. It was to be used mainly within the atmosphere, while the Cherudim SAGA was to be used in space and the GRM Gundam was to be used within the Orbital Elevators. One of the missions it participated in was the combat intervention in Africa of a facility disguised as a civilian enterprise broadcasting facility.[2] In reality, however, it was an energy facility using its own microwave receiver in order to harness solar energy to build up a group's military capabilities.[2] Arios Ascalon destroyed the antenna tower of the facility and the government had an excuse to check out the facility due to the destruction.[2] In order to prevent detection, the Ascalon rarely transformed into its mobile suit mode and used low altitude flying combined with the Optical Camouflage (like the Ptolemaios II) to achieve this.[2]

In Gundam 00I 2314 Chapter 02, Leo Sieg (Leonard Fiennes) used Ascalon to chase down an ELS assimilated airplane and he managed to take it down with Ascalon's GN Sword. Unfortunately, Leo wasn't aware that Arios Gundam Ascalon had been infected by ELS.

In Gundam 00I 2314 Chapter 03, Leo was given a mission by Chall Acustica to destroy an abandoned facility containing ELS debris inside. Leo destroyed the facility with GN missiles, but the explosion caused ELS fragments to scatter toward the Ascalon. The ELS fragments started to assimilate the Ascalon, but Leo managed to escape and allowed the Ascalon to crash into the ground. The ELS Ascalon then rose from the ground and cornered Leo. Lars, in a jeep, fired a grenade launcher at the ELS Arios and rescued Leo. Later on, his sister, Dell (Delphine Bedelia), managed to recover both Lars and Leo. Elsewhere, Hayana recovers the MSJ-06YIII-B Tieren Kyitwo from an abandoned HRL base. Dell and Leo battled the ELS Ascalon with Tieren Kyitwo and managed to destroy the ELS abomination. 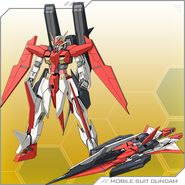 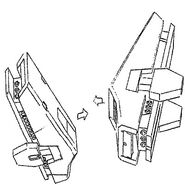 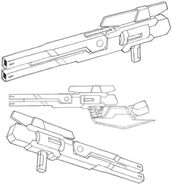 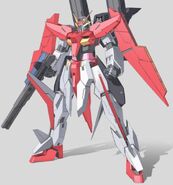 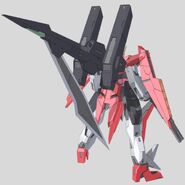 Retrieved from "https://gundam.fandom.com/wiki/GN-007/AL_Arios_Gundam_Ascalon?oldid=497920"
Community content is available under CC-BY-SA unless otherwise noted.