A heavily armed and armored mobile suit, the Gundam Virtue has the highest offensive and defensive power among the third generation Gundams deployed in AD 2307 by the Celestial Being, a paramilitary organization aiming to eliminate world conflicts through armed interventions.[1][2][3][4] Specializing in artillery warfare for fleet battles and assaulting enemy strongholds, the Virtue's firepower is unmatched among contemporaries thanks to heavy beam weaponry, consisting of a GN Bazooka and two GN Cannons.[5][6][7][8] As Virtue is not meant for anti-mobile suit combat, its only melee weapon is a pair of GN Beam Sabers.[5][7][9] Due to its large size, Virtue's mobility and evasive capabilities are lower than the other Gundams, but these weakness are mitigated by its high defensive strength in the form of heavy armor and the ability to generate a 360-degree GN Field barrier around itself that can nullify most physical and beam attacks.[1][4][5][10]

The Virtue demonstrated impressive propulsion capabilities when it was shown to be capable of overcoming the combined thrust of six MSJ-06II-E Tieren Space Types.[11] Like the other Gundams, Virtue has a semi-perpetual GN Drive in the center of its body that provides almost limitless energy and generates special, multifunctional GN Particles.[4][6][7][8] The GN Particles have a unique mass reduction effect and because of this, the heavily equipped Virtue can operate efficiently and weighs only half as much as the similarly bulky MSJ-06II-A Tieren Ground Type operated by the Human Reform League.[3][5][7][12] This reduction effect remains even when the Virtue is not operating as the GN Drive continues to function.[9] The GN Particles are also utilized for propulsion, beam weaponry, generation of GN Field, attitude control, and for stealth purposes as they can cause electromagnetic interference, leaving conventional communications and radar devices useless.[4][7][8][13]

Due to the heavy GN Particle demand of Virtue's beam weaponry and GN Field, large capacity GN Condensers are mounted throughout its body to store excess particles produced by the GN Drive when the Gundam is not operating.[13][14][15][16] The GN Particles are primarily controlled through a pair of torso-mounted clavicle antennas, and light purple-colored "GN Cables" are installed in various locations to facilitate the supply of these particles to each part of the Gundam and for attitude control purposes.[4][10][11][13] In an emergency, the Virtue can activate the special "Trans-Am System" to enhance its thrust and defensive strength, as well as increase its output to three times that of its normal specifications for a limited time period.[14][17][18] The Virtue glows red as a side-effect and though Trans-Am boosts the power of its beam weaponry, this system is also a double-edged sword as Virtue's performance will drop dramatically once it ends.[10][14][17][18]

Besides the Trans-Am System, which is also utilized by other Gundams, the Virtue has another method of responding to emergency which is more unique, it can purge its armor to reveal the GN-004 Gundam Nadleeh.[1][5][11][17] However, this was not the original intention of the armor purging mechanism, which was meant for the simultaneous switch to Nadleeh while activating the latter's Trial System.[12][19] The concept of hiding a Gundam within another Gundam can be traced to the common predecessor of Virtue and Nadleeh – the second generation GNY-004 Gundam Plutone, which is fitted with an ejectable flight unit known as the "Core Fighter".[20][21][22] The Plutone is also the first Gundam capable of generating a 360-degree GN Field, but its generation system is not as stable as Virtue's.[22][23][24] The Nadleeh is concealed to prevent its Trial System, an ability to stop betrayers, from being discovered and for effective utilization of the limited numbers of GN Drives that Celestial Being has.[19][20][25][26]

Among the third generation Gundams, Virtue's development was the slowest.[20] At that time, the current form of Virtue was also known as "Gundam Virtue Particle" to differentiate it from an alternate design, the physical projectile-based GN-005/PH Gundam Virtue Physical.[22][25][27][28] Both designs are prepared by Veda, Celestial Being's quantum computing system, based on its predictions about armed intervention missions.[22][26] Despite their differences, both Virtue Particle and Virtue Physical are designed as artillery units for anti-fleet and anti-stronghold combat, this ensure the Nadleeh is positioned at the rear and could quickly return to the base or mothership to be outfitted with more effective equipment to stop betrayers.[26][27][29][30] In the end, after studying the results of multiple joint exercises involving the four Gundam Meisters, Veda chose Virtue Particle as it displayed better cooperability with the other Gundams.[25]

Veda rejected the idea of keeping the Virtue Physical as alternate equipment, because switching equipment mid-mission is expected to be very difficult due to the lean manpower and the design of the mothership.[25] There is also the worry that the enemy might discover the hidden Nadleeh by observing the commonalities between the two equipment sets.[25] The Gundam Virtue is eventually succeeded by the reborn Celestial Being's GN-008 Seravee Gundam, which is also an anti-fleet and anti-stronghold mobile suit equipped with multiple beam cannons and GN Field.[28][31][32][33] Data of the Gundam Virtue is also utilized in the development of the CBY-077 GN Cannon and the GNZ-003 Gadessa, the former is part of Veda's alternate plan for armed intervention and the latter is used by an enemy of the reborn Celestial Being.[28][34][35][36]

The Virtue's main armament, it is a large, handheld cannon that fires a beam of high density, high energy GN Particles.[4][7][9][16] The GN Bazooka can vaporize multiple mobile suits with a single shot, but has to be charged before firing.[4][7][11][37] One of the most powerful weapons used by the third generation Gundams, it can be operated in two modes: "Normal Mode" and the far more powerful "Burst Mode".[4][7][10][12] When needed, the Virtue can be equipped with a second GN Bazooka, carrying one in each hand.[1][17][38] The GN Bazooka has two movable grips, one on the left and one on the right, and it is possible for one of the grips to be relocated to the bottom of the weapon's back half when needed.[3][7][10][11]

Also known as the "GN Bazooka Burst Mode", it is the weapon's maximum output form.[3][7][15][39] In this mode, the Virtue's center chest armor lifts up, and the GN Bazooka's rear end slides out for connection to the GN Drive via the chest-mounted GN Condenser.[3][4][7][39] Additionally, the weapon's barrel splits in half and the inner yellow-colored barrel parts slide out.[3][7][17][39] The Burst Mode fires a huge beam over a wide area and has severe recoil that pushes Virtue back quite a distance.[3][16][39] As this mode consumes enormous amount of GN Particles, it is incapable of rapid firing.[7][9][12][39] The Burst Mode's destructive power is further enhanced during Trans-Am, but its particle consumption become so intense that the Trans-Am ended immediately after a single shot.[14][17]

A weapon that emits a beam blade made of GN Particles from its hilt when drawn, one is stored in each knee (or to be more precise, GN-004 Gundam Nadleeh's knees), and they have the same capabilities as those of other Gundams.[4][7][9][19] As the Gundam Virtue is not intended for anti-MS combat, the GN Beam Sabers are its only melee weapon.[7][9][19] Although more powerful than the carbon blades and sonic blades of conventional mobile suits, Virtue rarely used the GN Beam Sabers, reserving them for emergencies.[7][9][19]

A twin barreled beam cannon, one GN Cannon is mounted on the left and right sides of the backpack and their barrels extend during use.[4][7][15][37] Although their firepower is inferior to the GN Bazooka's, the two GN Cannons can still destroy several mobile suits in one shot.[4][7][11][37] Additionally, they can move flexibly and target enemies in a wider area.[4][7][11][40] By pointing the GN Cannons and GN Bazooka in the same direction and firing them at the same time, the Virtue can deliver a devastating attack.[4][7][9][41]

The Virtue can deploy a spherical GN Field barrier around itself that provides 360 degree protection against most physical and beam attacks.[1][7][11][41] The GN Field can protect another Gundam in addition to Virtue when needed, and is created using the compressed high density GN Particles stored in the GN Condensers and released through the GN Field generators in Virtue's legs and GN Cannons.[4][7][11][12] Housed in the outer side of each leg and in each GN Cannon, the four GN Field generators slide out when in use.[7][11][12][19] Thus, restricting the generators' movements can impede the deployment of the GN Field.[11] The GN Field's excellent defensive capabilities come at the cost of high GN Particle consumption, necessitating the Virtue's GN Condensers to be fully charged with the particles in advance.[7][9][10] While the GN Field is typically dropped prior to the firing of Virtue's beam weapons, it is possible to fire the GN Bazooka from within the barrier.[11][17][41] The defensive characteristics of the GN Field can be affected by its GN Particles' compression rate, and beam shots can penetrate the barrier if they match this compression rate.[4][12][40] Fortunately, this problem can be solved by altering the particle compression rate.[17][42] The GN Field is also shown to be defenseless against the GNW-002 Gundam Throne Zwei's GN Fangs.[17][42] Besides forming the GN Field, GN Particles are also emitted from the GN Field generators when Virtue maximizes its particle emission for atmospheric entry.[43] The emitted particles are deployed in front of Virtue, shielding it from the aerodynamic heating caused by the adiabatic compression during atmospheric entry.[43][44] This use of the GN Particles is also present in other Gundams.[43][44]

Like the other third generation Gundams, the Gundam Virtue can deploy an external camouflage membrane over itself when stationary, blending it into its environment and making it look invisible.[39] This allows Virtue to remain unseen as it waits for the mission to commence.[39]

A special system hidden by Celestial Being's founder, Aeolia Schenberg, within the black box of the original GN Drives and is revealed when a traitor emerged in the organization.[8][14][17] During Trans-Am, all of the compressed high-density GN Particles accumulated in the Gundam are fully released, enhancing its mobility and defensive capabilities as well as allowing it to perform at three times its normal output for a limited time.[14][17][18] The entire Gundam also appears red as the tremendous amount of GN Particles surrounding and covering the machine as well as those within the GN Cables and in the minute paths in the armor begin to glow red.[8][14][17][18] Furthermore, afterimages are generated when the Gundam is moving.[17] Although Virtue obtains greater destructive power during Trans-Am due to the conversion of the large amount of compressed high-density GN Particles into beams, the system is unfortunately a double-edged sword, as the Gundam's performance will drop dramatically once it ended since most of the GN Particles in its body have been used up.[14][17][18] This negative effect will last until the stored GN Particles within the Gundam return to normal level, thus usage of the Trans-Am requires careful consideration.[18] For Virtue, which requires a large amount of GN Particles for both offense and defense even during normal time, this negative effect impacted it more than the other Gundams.[14]

A customized Gundam Virtue Gunpla built and operated by Georgios Laertius. It features an army green color scheme and retains all of the Gundam Virtue's standard armaments. 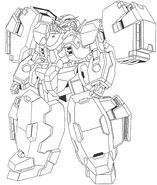 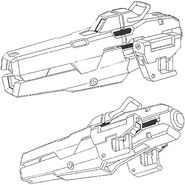 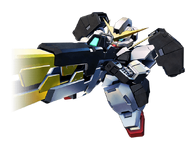 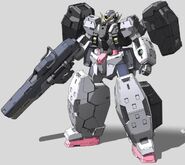 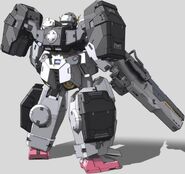 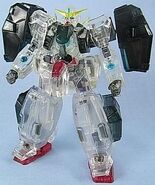