Due to GN-004 Gundam Nadleeh’s role in countering traitors, it is viewed as Celestial Being’s important secret, so a decision is made to conceal it using outer armor that will disguise it into another mobile suit – the Gundam Virtue.[1][2][3] Veda prepared two design plans for Gundam Virtue based on its predictions about future missions.[1][2][4] There is the ‘Particle’ type that specializes in using large beam weaponry, and then there is the ‘Physical’ type, which is the Gundam Virtue Physical, that focuses on physical attacks.[1][2][3][4]

Despite their differences, both designs are similar in that they are not meant for anti-MS combat, instead, they specialized in artillery warfare for anti-fortress and anti-fleet combat, and this also ensures the Nadleeh is positioned at the rear during battle.[1][2][5] This allows the Nadleeh to quickly return to the base or mothership, and be fitted with the appropriate equipment so as to more effectively counter traitors.[5] As Virtue Physical’s armaments consisted primarily of solid projectile weaponry, it has more GN Particles available for its GN Field, granting it rock-solid defenses.[3][4][5] Due to this, Celestial Being’s engineers prefer it to the ‘Particle’ type.[3]

Initially, the Virtue Physical has a higher chance of being adopted as the GN Condensers need to be improved to meet the heavy particle demand of the ‘Particle’ type, and as the organization’s enemies – the HRL, Union and AEU do not possess beam weaponry yet.[2] However, tests also showed that several weapons of the Virtue Physical are useful as special weapons for the other mobile suits such as the Gundam Dynames, whose weapon plan may still change depending on Veda’s assessment of subsequent test results and mission requirements.[2][6]

In the end, Veda chose the ‘Particle’ type, but this does not mean the Virtue Physical has any performance issues.[3][4][6] Veda’s decision is because the ‘Particle’ type displayed better cooperability with the other Gundam Meisters during various joint exercises.[3] This decision also greatly increases the urgency for the engineers to complete the GN-001 Gundam Exia’s GN Long and Short Blades, as these weapons now plays a greater role in combating traitors due to their ability to penetrate GN Field.[3] Furthermore, it increases the responsibilities of Exia’s Gundam Meisters when it comes to stopping the traitor, and placed more scrutiny on the selection process of the particular meister.[3]

Keeping the Virtue Physical’s equipment as an alternative for the Virtue is deemed unfeasible.[3] Due to manpower constraints and the design of the tactical mothership, changing Virtue’s equipment mid battle is extremely difficult to achieve.[3] In addition, the swapping of equipment may also cause enemy to discover the hidden Nadleeh by observing the commonalities between the two equipment sets.[3]

Mounted on the left side of the Virtue Physical’s backpack, it is the suit’s sole ranged beam weaponry.[4][5][6] The GN Beam Cannon has top-class destructive power amongst all the Gundams’ weaponry, and can vaporize a large asteroid in one shot.[5]

A container loaded with 24 GN Missiles is installed in each leg’s armor.[4][6] When firing the missiles, the front of the leg armor flips open.[4][6] Upon penetrating the target, the GN Missile releases GN Particles, destroying the target from within.[4][6]

A handheld weapon that fires solid projectiles.[4][6] It is because of this weapon that the Gundam Virtue’s handheld beam cannon is given the name of ‘GN Bazooka’.[4][6]

As the Virtue Physical contains the Gundam Nadleeh within it, it also has access to the pair of GN Beam Sabers stored in Nadleeh’s knees. The GN Beam Saber is a close combat weapon that emits a beam blade made of GN Particles from its hilt when drawn.

To test the Virtue Physical, a mock battle was held between it and Grave Violento’s GN-XXX Gundam Rasiel, which was also supported by Hixar Fermi’s GNR-000 GN Sefer. Not long after the battle began, Virtue Physical showed its worth as a formidable adversary. Using its GN Field, the Virtue Physical easily blocked multiple beam shots fired by GN Sefer’s remote weaponry – the GN Proto Bits. When these bits returned to the GN Sefer for recharging, Tieria Erde sized the opportunity and attacked.

Tieria first lowered the Virtue Physical's GN Field and fired the GN Missiles in Virtue Physical’s legs. Grave managed to evade the missiles, but this caused his Rasiel to lose its balance. Tieria then fired the Virtue Physical's sole ranged beam weaponry, the GN Beam Cannon, and Grave was aware of its destructive power as he had watch a video of it easily destroying a large asteroid prior to the mock battle. Grave tried to block the beam attack using the GN Sefer’s GN Proto Bits, but Hixar’s GN Sefer unexpectedly plunged into the beam’s path. Hixar planned to diffuse the Virtue Physical’s attack via the massive amount of GN Particles spewing from the GN Sefer.

Although Hixar's plan worked, his GN Sefer exploded from the beam attack and the stress placed on its GN Condenser. The explosion was so large and fast that there was not enough time to separate the GN Sefer’s GN Pod from the machine’s main body. After the explosion subside, Grave immediately recovered the GN Pod's wreckage and rushed back to base. Although the mock battle was still on, the Tieria did not continue attacking using the Virtue Physical. 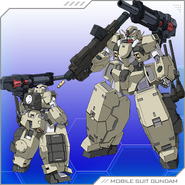