The GN-004 Gundam Nadleeh (aka Gundam Nadleeh, Nadleeh) is a mobile suit featured in season one of Mobile Suit Gundam 00. It is piloted by Tieria Erde.

Hidden within the GN-005 Gundam Virtue, the Gundam Nadleeh is quite special among the Gundams deployed by the Celestial Being for armed interventions.[1][2][3][4] The Nadleeh's main feature is the "Trial System" which allows its Gundam Meister, Tieria Erde, to take control of machines within a certain range that are linked to Celestial Being's quantum computing system, Veda.[1][2][5][6] The Trial system's primary purpose is to counter betrayal by the Gundams as well as protect them from being misused, and it provides an overwhelming advantage during anti-Gundam battle.[1][6][7][8] Due to this system, Nadleeh can be viewed as an overseer of the Gundams.[9] The purging of Virtue's armor to reveal Nadleeh and the use of the Trial System seem to require Tieria, who is an Innovade, to utilize his quantum brainwaves, as evidenced by his eyes glowing when he carried out these actions.[2][3][5][6] Like its fellow Gundams, Nadleeh has a semi-perpetual GN Drive in the center of its body that provides almost limitless energy and produces special, multifunctional GN Particles.[9][10][11][12]

The Nadleeh is concealed to prevent the Trial System from being discovered and used by the enemy against Celestial Being, and furthermore, disguising it as Virtue allows for the effective utilization of the organization's limited GN Drives.[8][13][14] While Nadleeh was meant to be revealed when a betrayer appears, Tieria was forced to reveal it earlier to escape from a tough situation that Virtue was in.[2][3][8][9] The concept of hiding a Gundam within another Gundam can be traced to the common predecessor of Nadleeh and Virtue: the second generation GNY-004 Gundam Plutone, which has an escape unit known as the "Core Fighter" to protect the GN Drive and Gundam Meister when the mobile suit is damaged.[13][15][16][17] However, the Core Fighter's combat capability is lacking due to its small size, making it unlikely to survive a battle that overwhelmed a Gundam.[13][15][18] To create a combat capable escape unit and thereby increase the GN Drive as well as the Meister's chance of survival, a decision was made to use a mobile suit instead and this concept was incorporated into the Nadleeh.[13][14][19] Thus, Nadleeh also functions as Virtue's escape unit.[19]

The Trial System was initially meant to be tested by Plutone, but this was scrapped as the Plutone's Meister was deemed unsuitable for the task.[13] The GNY-0042-874 Gundam Artemie was then created to use the system, but the Artemie's development was halted following a critical decision made by its Meister and the Nadleeh was built as its replacement.[13] The original plan for Nadleeh when it has to use the Trial System is for Virtue to first retreat to CBS-70 Ptolemaios or a base before changing form.[20] Strictly speaking, Virtue does not need to return for the change into Nadleeh as the process only requires a simple removal of armor.[3][6][20] But, not only is doing so while on the battlefield dangerous, the Trial System also has a very limited effective range.[1][20][21] Thus, Nadleeh needs to be fitted with the Akwos equipment to extend the system's range, and so Virtue has to return for this outfitting work to be done.[8][20][22] However, when Nadleeh actually used the Trial System during the unplanned battle against the Team Trinity's Gundam Thrones, it did not follow the aforementioned plan.[6][23]

The hair-like red cords on the Nadleeh's head supply GN Particles to the Virtue's armor when the former is hidden within the latter; these cords are mostly attached to the Virtue's head and center chest armor, helping to hold them in place.[1][2][3][12] As with its fellow Gundams used for armed interventions, the Nadleeh also has light purple-colored "GN Cables" installed in various locations to facilitate the supply of GN Particles to each part of its body and for attitude control purposes via the particles' mass manipulation ability.[9][12][24] The GN Particles are also used for propulsion, beam weaponry, and stealth purposes as they can cause electromagnetic interference, leaving conventional communications and radar devices useless.[9][11][24] Other GN Particles-related equipment used across these Gundams include a pair of torso-mounted clavicle antennas that serve as the particles' primary control device, and GN Condensers mounted throughout the body to store excess particles, ensuring a reserve of particles that the Gundam can rely on when its operation consumed more than what the GN Drive can produce instantaneously.[9][12][24][25]

In terms of combat capabilities, Nadleeh is inferior to Virtue due to its significantly lower GN Particle storage capacity.[4][9][26] However, this is not a flaw per se, as Nadleeh is not intended for active usage in armed interventions, with Virtue being the preferred form for such situations.[13][14] The Nadleeh has a pair of GN Beam Sabers and can use the Virtue's GN Cannons as handheld weapons when it is unleashed in battle directly from the Virtue.[2][3][6][21] When launched as a stand-alone unit, it trades the GN Cannons for a GN Beam Rifle and a GN Shield.[2][9][21][26] Like the other Gundams, Nadleeh can activate the special "Trans-Am System" during an emergency, enhancing its thrust and defensive strength, as well as increase its output to three times that of its normal specifications for a limited time period.[25][26][27][28] The Nadleeh also glows red as a side-effect, but the system is a double-edged sword as Nadleeh's performance will drop dramatically once it ends.[26][27] The Nadleeh is later succeeded by the reborn Celestial Being's GN-009 Seraphim Gundam, which is also equipped with the Trial System.[29][30][31][32]

A melee weapon that emits a beam blade made of GN Particles from its hilt when drawn, one is stored in each knee and they are the exact same ones as used by the GN-005 Gundam Virtue.[6][9][21][26] The Nadleeh's GN Beam Sabers have the same capabilities as other Gundams' and are more powerful than the carbon blades and sonic blades of conventional mobile suits.[21]

The same pair of twin-barreled beam canons as used by Virtue.[3][5][21][33] After Virtue purged its armor, the Nadleeh can wield the discarded pair of GN Cannons as handheld weapons by using their hidden foldable grips.[3][5][21][33] In this handheld state, the GN Cannons have wider effective range than when they are attached to Virtue's backpack.[7] While their firepower is inferior to that of the Virtue's GN Bazooka, the GN Cannons can still destroy several mobile suits in one shot.[3][7][21]

An improved and evolved version of the beam rifle used by the GNY-004 Gundam Plutone, the Nadleeh's predecessor.[7][14][21] This GN Beam Rifle is created specifically for Nadleeh, serving as its primary ranged weapon when the Gundam is deployed as a stand-alone unit.[12][26][34] While not as powerful as the Virtue's GN Bazooka or the GN Cannons, it can still fire high-output particle beams and excels in rapid firing.[7][21] Additionally, the rifle has a wide muzzle for attacking a broad area, and a beam blade can also be generated from the same muzzle, allowing the weapon to function as a large-sized beam saber.[9][12][21][33]

Like the GN Beam Rifle, Nadleeh's GN Shield is an improved and evolved version of the Plutone's.[7][14][21] Used when the Nadleeh is deployed as a stand-alone unit, this defensive armament is mounted on the left forearm and is made of E-Carbon.[12][26][33][34] Additionally, GN Particles are fixed to the shield's surface, enabling it to protect the Nadleeh from beam and physical projectiles.[7] Although it has a small protective surface as a result of its sleek design, it is light, easy to wield, and does not hinder mobility, making it suitable for use by the lightweight Nadleeh.[7][12][21]

Uniquely installed in the Nadleeh, it is a special function that was not a part of the plan for armed intervention.[7] The Trial System generates an invisible field known as "Trial Field" around the equipped Gundam, allowing its Gundam Meister to control all machines linked to Veda within this field and forcibly shut them down.[1][5][6][35] This system is one of the guard systems prepared by the Celestial Being's founder, Aeolia Schenberg, to prevent the plan's collapse.[1][12][21] Its main purpose is to prevent betrayal of powerful GN Drive-equipped machines, such as the Gundams, and to stop them from being misused if they were captured.[7][8] While the system provides an overwhelming advantage during anti-Gundam battle, it has a limited effective range.[1][6][8][21] To solve this weakness, the range extending Akwos equipment was developed.[7][8][21][22] Since its targets are primarily members of Celestial Being, information on the Trial System is highly classified in the organization.[13] Only a few Meisters have access rights to use the Trial System, and it seems an active link to Veda via quantum brainwaves is also needed for its usage.[6][35][36] Additionally, only one Meister can use it at a time, and there is a hierarchy to the access rights.[35] Therefore, a Meister with higher access rights can override use of the system by another with lower access rights.[6][35][36] When this happens, the machines previously shut down by the Trial System will return to full operational status.[6][35]

A special system hidden by Celestial Being's founder, Aeolia Schenberg, within the black box of the original GN Drives and is revealed when a betrayer emerged in the organization.[11][27][28] During Trans-Am, all of the compressed high-density GN Particles accumulated in the Gundam are fully released, enhancing its mobility and defensive capabilities as well as allowing it to perform at three times its normal output for a limited time.[25][27][28] The entire Gundam also appears red as the tremendous amount of GN Particles surrounding and covering the machine as well as those within the GN Cables and in the minute paths in the armor begin to glow red.[11][25][26][28] Furthermore, afterimages are generated when the Gundam is moving.[26] Although Trans-Am turns the Nadleeh into a high mobility unit, the system is unfortunately a double-edged sword, as the Gundam's performance will drop dramatically once it ended since most of the GN Particles in its body have been used up.[25][27][28] This negative effect will last until the stored GN Particles within the Gundam return to normal level, thus usage of the Trans-Am requires careful consideration.[25] 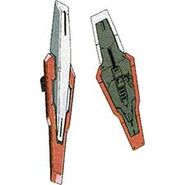 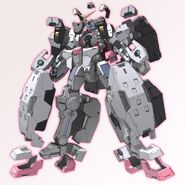 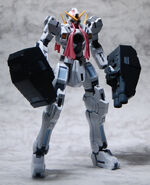