To prevent betrayal of powerful GN Drive-equipped machines, such as the Gundams, the Celestial Being developed the "Trial System" that can forcibly take control of machines linked with the organization's quantum computing system, Veda.[1][2][3][4] The Trial System is fitted in the GN-004 Gundam Nadleeh which is concealed within the GN-005 Gundam Virtue, and until the situation calls for it, both the system and Nadleeh will remain hidden.[1][3][4] This ensures that the system could not be used by the enemy against Celestial Being.[1] On the other hand, the Trial System's effective range is very limited and to solve this, a set of special equipment known as "Akwos" is developed for Nadleeh to expand the system's range by several tens of times.[1][2][3][5]

Development of the Akwos utilized data from the GNY-0042-874 Gundam Artemie, another Gundam fitted with the Trial System and has a pair of special antennas on one of its weapons that can expand the system's range.[3][6][7][8] When fitted with the Akwos, the Nadleeh is called the "GN-004/te-A02 Gundam Nadleeh Akwos".[1][2] The "te" in its model number stands for "Trial Enhancing", while "A02" stands for "Akwos type unit 02"; unit 01 is canceled while in development and never built.[1] The name "Akwos" is derived from a Navajo word that roughly means "head", and is inspired by the Nadleeh Akwos' most characteristic equipment - the GN Mask Sword.[1] This naming is also in line with the original Nadleeh, which is named after a Navajo spirit.[1]

The Nadleeh Akwos retains the original Nadleeh's GN Beam Sabers.[1] A melee weapon that emits a beam blade made of GN Particles from its hilt when drawn, one is stored in each knee.[4][10][11] These GN Beam Sabers are more powerful than the carbon blades and sonic blades of conventional mobile suits.[10]

A large handheld sword, it also contains the Trial System's control functions.[1][3] Can be mounted on the GN Shield and then attached to the suit's back, following which, the sword's blade splits in two, and the weapon's Gundam Mask opens up.[1][3] In this state, the Trial System's effective range can be expanded to its maximum limit.[1]

A defensive armament that can be mounted on the left forearm.[1] When the Trial System's effective range is to be expanded to its maximum limit, the GN Shield is fitted with the GN Mask Sword and then attached to the suit's back.[1]

A system that generates an invisible field known as "Trial Field" around the equipped Gundam, allowing its Gundam Meister to forcibly control all machines linked to Veda within this field and shut them down.[1][4][12][13] The Trial System is one of the guard systems prepared by the Celestial Being's founder, Aeolia Schenberg, to prevent the plan's collapse.[5][10] Its main purpose is to prevent betrayal of powerful GN Drive-equipped machines, such as the Gundams, and it provides an overwhelming advantage during anti-Gundam battle.[1][5][10] By using its GN Mask Sword, GN Shield and Trial Blade Antennas in unison, the Nadleeh Akwos can expand the effective range of its Trial System several tens of times compared to that of the Nadleeh's.[1][2][3] If the Trial System is somehow disengaged, the machines previously shut down by the system will return to full operational status.[4][13]

One mounted on each of Nadleeh Akwos' forearms and legs, the four Trial Blade antennas do not function as offensive weapons or shields, instead they serve to expand the Trial System's range.[1][3] These antennas can move freely at their point of attachment, pointing to the direction where the system's range is to be extended, however they are quite fragile.[1]

AD 2308. Upon realizing that Alejandro Corner might killed them after they had assisted in the development of the GNX-603T GN-X, Robert Spacey and Deborah Galiena escaped to Lagrange 1's asteroid region. At that time, the pair was unaware that the final battle between the Celestial Being and the UN Forces was going to take place there. When the battle occurred, the pair lay low until the fighting was over. While in the asteroid region, the pair accidentally discovered one of the asteroid bases used by Celestial Being.

In the base, Robert and Deborah met members of Fereshte, a support organization of the Celestial Being. One of the members, a man with a vicious face and wearing handcuffs, revealed that Celestial Being had collapsed after its defeat by the UN Forces, and that Fereshte was recovering spare parts from the Celestial Being's various supply bases. Hearing this, Robert was terrified for his and Deborah's safety. No one would reveal such classified information of a secret organization to others, unless they had planned on killing them later. The handcuffed man continued that despite the Celestial Being's downfall, the members of Fereshte still have to live on and that the collected spare parts would be useful to them in the coming days.

Pointing to a sword with a huge face, the man remarked that it would be a waste to leave such equipment here. According to him, that sword had the ability to control other Gundams. As a researcher studying Mobile Suit development history, this was very interesting to Robert and even worth giving up his life if he could learn all about its history before he was killed. The man explained that the sword was part of the Akwos equipment for the Gundam Nadleeh, and Robert immediately imagined a Gundam he had never seen before using this sword and leading other Gundams.

The man then said that Fereshte had completed their task at the base, and advised Robert and Deborah to leave quickly, otherwise they would never be able to clear their names if the UN Forces arrived. With that, the man left without killing them. Robert and Deborah left as told and vowed not to tell others what they had seen. The pair headed to Earth to look for a journalist in Japan who could help them. Unfortunately, the journalist had passed away and through Deborah's connection, they managed to seek shelter at the Okinawa Base. The UN then learnt of their circumstances, but did not pursue the matter. Robert felt things would have turn out differently if the UN knows about the incident in the asteroid base. 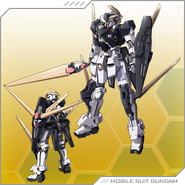