The GN-003 Gundam Kyrios (aka Gundam Kyrios, Kyrios) is a third-generation Gundam featured in season one of Mobile Suit Gundam 00. The unit is piloted by Allelujah Haptism.

Kyrios is the successor unit of GNY-003 Gundam Abulhool and predecessor to GN-007 Arios Gundam; a third generation Gundam. The unit is the product of accumulated data on Abulhool's tactical and system development; its the only Gundam of its kind that’s capable of transforming into a high-speed flight form in its time. However, its design significantly differs from its predecessor. Because Abulhool was a prototype, Celestial Being engineers never gave it a full MS form as they were focused more on evaluating untested equipment. With Kyrios, Celestial Being engineers designed and built it with a complete MS form for direct combat. Its standard armaments consisted of a GN Beam Submachine Gun, a pair of GN Beam Sabers and a GN Shield. When additional equipment is needed, Kyrios has several optional peripheral equipment: the Tail Unit, Tail Booster, and/or GN Hand Missile.

Kyrios’ flight form doubles as a tail-less jet-fighter and a bomber. Its sensors are built into the nose unit, appearing as the cockpit; the true cockpit remains under Kyrios's GN Drive. In combat, its flight form relies on high-speed dog-fighting and hit-and-run tactics. Kyrios’ transformation system is simplistic compared to all known MSs of its time, and was built with a swift autonomous system that easily switches between forms in mid-air (such a system doesn't exist outside of Celestial Being, only talented pilots like Graham Aker, or other skilled pilots using the Graham Special, are capable of performing such a maneuver manually). However, its Meister can manually alter its transformation sequence to be in half-MS form and half-flight form for specialized tactics and/or unique combat situations.

When transforming from MS to flight form, its legs are turned and faced to its outer-sides. The rear section of its legs are now part of the inner-sides and act as a docking clamp for peripheral equipment. Its feet are bent downwards to expose two thrusters and turned 90-degrees to aerodynamically level with its flight from. In addition to its pre-existing side thrusters, it totals four GN Verniers for high-speed acceleration. The arms are closed and tightened to its sides and the panels behind its arms are closed and form the upper armor portion of its flight from. The MS head itself is fixed face-forward and the sensor unit laps over the head to cover and complete its flight form. Its GN Beam Submachine Gun is either clamped onto the right arm or held by an MS hand and faced forward for dog combat. The GN Shield is placed on its left arm and faced 90-degrees sideways to make it aerodynamic for flight. Due to the length of its shield, a small wedge exists to allow the shield to slide through the left side of its wing. The cockpit rotates 90-degrees to level the pilot between flight and MS forms. As they interfere with the suit's transformation, any peripheral equipment docked on its legs will have to be discarded before the suit can transform back to MS form. In MS form, Kyrios’ forearms have hardpoints for docking optional GN Hand Missiles (each one with 9 missiles, totaling 18 to fire) for mid-to-long ranged combat.

In terms of stealth and systems, Kyrios’ GN Drive produces GN Particles that prevent enemy sensors from detecting its presence. However, should the enemy use wide sensor networks, they can look for focal areas that have been disrupted to detect Kyrios' presence. To avoid visual detection, Kyrios can activate its Optical Camouflage to “cloak” itself. However, the system can’t be used while actively in motion. For the camouflage to work, it has to be remain stationary and shut off its particle distribution or the camouflage will fail and reveal itself to enemy visual contact. Because Kyrios is often deployed from space-to-Earth, the unit was given a GN Field to handle the intense heat of atmospheric re-entry, but also to protect against heavy enemy fire. For emergencies, Kyrios can activate its Trans-Am System for ultra high-speed combat to end the battle and/or make a quick getaway.

For special equipment, where Kyrios needs greater mobility and speed, it has its Gust-silhouette, GN-003/af-G02 Gundam Kyrios Gust. It's an enhanced exo-flight armor system that allows Kyrios to fight at high altitude (from an altitude of below 1 kilometer up to the upper-thermosphere at 600 kilometers), atmospheric exiting capabilities (it doesn't need an orbital elevator to return to Ptolemy), and a powerful GN Long Barrel Cannon for long-ranged shooting. When combat support and greater firepower is needed, Allelujah can request back-up from the Assault Container. The container has atmospheric exit and re-entry capabilities and can retrieve Gundams and provide combat support for Kyrios in emergencies. The container can also dock with a GN Arms unit, though the Kyrios was never stated to have its own GN Arms unit developed, unlike the Exia and Dynames.

Its primary weapon, the GN Beam Submachine Gun, is a two-barreled particle beam gun that can fire in single shot or in bursts. The beam submachine gun’s trigger function can be removed and fitted with a forearm clamp to give Kyrios free-hand firing solutions, however, the clamp limits its angles in shooting. Can be used in MS and flight form.

The GN Shield is reinforced with GN Particles, giving it great tensile strength against enemy fire and the tip of its shield is sharp enough to tear through armored enemy targets. More than a mere shield, the lower section of the shield can transform into a pincer-claw that can extend to grab hold of its target for melee combat. An extendable blade was built in between the claw so that it could pierce through its target. The shield is docked with the unit's left knee-fin during flight form.

Kyrios is equipped with a standard pair of beam sabers that all third generation Gundams use. Primarily used for high-speed melee combat, the pair are placed behind the rear skirt armor of Kyrios, but they're rarely used as its Meister prefers to deploy its GN Shield for rapid response against an enemy target.

The Tail Booster is an optional weapon system for Kyrios' flight form.[2] Designed through the shell of the Tail Unit, it is armed with a pair of GN Cannons and with two large GN Verniers. The GN Cannons can take out a GNX-603T GN-X with a single shot. They have a forward 90-spherical-degree firing solution, applied for mid-to-long ranged shooting. The large GN Verniers are built within the shell of the Tail Unit, replacing its missiles and bombs with a condenser and thrusters for high-speed combat. Because this component is dedicated only to Kyrios' flight form, it must be discarded if the Meister chooses to switch to MS form.

The Tail Unit is an optional multi-purpose weapon module used by Gundam Kyrios for stronghold assaults, bombing run, etc. It can store 14 300kg air-to-ground guided missiles, air-to-air missiles or other types of missiles, and fire them from the 14 hatches on the top surface, or carry various types of bombs such as 18 rounds of Napalm bombs and drop them on ground targets via opening the two hatches on the bottom-rear section. During missions where Kyrios emptied its ordinance, but remained in combat, the Meister usually discards the unit for MS combat. While top-of-the line for its time, it's a piece of disposable equipment as it carries no GN technology that can be used by the enemy.

The GN Hand Missile is part of Kyrios' optional weapons.[3] It is a 3-tube missile launcher, with 3 missiles in each tube for a total of 9 missiles per launcher. The GN Hand Missiles are designed to be dock-able to the forearms of Kyrios and usable in MS and flight form; it can be configured for Kyrios to utilize a traditional weapons trigger to hold and fire. Usually when utilized, a pair of them are docked to the forearm, giving Kyrios free-hands to carry additional weaponry. However, when used in pairs, it can't carry its GN Shield as it obstructs its flight form.

The operating system used by the Gundams that relies on a constant link to Veda. After the Veda link to the Gundams was permanently cut, the Ptolemaios team were forced to switch to an alternate and inferior stand alone system that they independently developed.

A customized color variant of the Kyrios Gunpla, it appeared in Gundam Build Fighters Try.

In AD 2308, after the battle against the UN Army ended, Allelujah ejected the unit's GN Drive before it came into the hands of the UN Army. The GN Drive was recovered by Fon Spaak for Fereshte, and afterwards, Celestial Being negotiated for its return along with GN-000 0 Gundam's GN Drive.

The Kyrios, without its GN Drive, was recovered by the Human Reform League and immediately used in a test with an experimental arm unit developed from the GNX-603T GN-X and a GN Drive Tau.[4] From this test, the HRL gained additional data on GN particle transmission and strengthened their know-how in terms of GN particle related technology.[4] As a result, the HRL was given the role of developing the GNX-704T Ahead.[4] It is unknown what happened to the Kyrios after the test.[5] 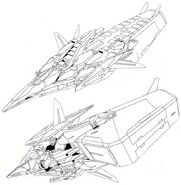 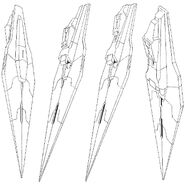 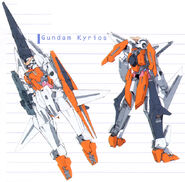 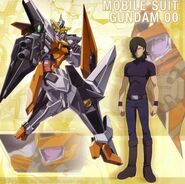 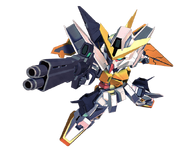 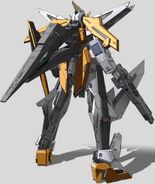 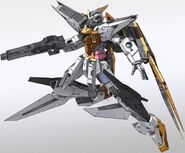 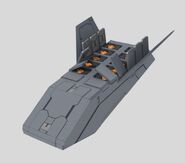 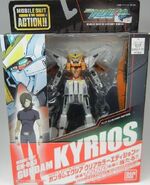 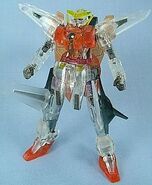 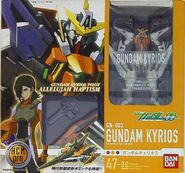 Retrieved from "https://gundam.fandom.com/wiki/GN-003_Gundam_Kyrios?oldid=453316"
Community content is available under CC-BY-SA unless otherwise noted.