The Gundam Kyrios Gust is the Gundam Kyrios fitted with the additional Gust equipment, granting it long-range shooting capabilities and improved mobility.[1][2][3] The Kyrios Gust is designed for combat within the vast atmosphere, with its intended operating altitude starting from 0km at the ground and extends up to 600km in the thermosphere.[1][2][3] This also means that the mobile suit is capable of leaving the atmosphere.[1][2][3] The "af" in the Kyrios Gust’s model number stands for "atmosphere fighter", and the "G02" designates it as the second machine in the "Gust" series, suggesting that other similar equipment also exist.[1]

The Large GN Vernier Units fitted on Kyrios Gust’s legs generate the highest thrust among the thrusters of all Gundams so far.[1][3][4] Additionally, these Large GN Vernier Units also adopted highly advanced aerodynamic design to reduce the amount of GN Particles consumed.[1] The Kyrios Gust also seem to have GN Verniers in the added armor on the front and back of its waist. Unlike other mobile suits, the Gundams can enter the atmosphere on their own by using GN Particles to shield themselves from the aerodynamic heating caused by the adiabatic compression during the entry process.[1][5][6] Nonetheless, they do not have the capabilities to fully overcome the Earth’s gravity and leave the atmosphere.[1] However, the Gust equipment’s powerful thrust enables the Kyrios Gust to achieve escape velocity.[1][3]

Another notable feature of the Kyrios Gust is that its Flight Mode uses a larger nose unit than the normal Kyrios.[1] This nose unit is equipped with high performance composite sensors, which can operate with the mobile suit’s main weapon, the GN Long Barrel Cannon, for highly accurate attacks over extreme distances.[1][3][4] Even with its added equipment, the Kyrios Gust can still transform between Flight Mode and MS Mode like the normal Kyrios.[1][2] However, as its operating environment can be harsher then the Kyrios’, the Kyrios Gust’s body is subjected to greater stress during transformation.[1] Overall, the Gust equipment adapts the Kyrios to specific missions, like the Kyrios’ Tail Unit, while retaining the Gundam’s ability to transform.[1]

Unlike the Kyrio’s GN Beam Submachine Gun that focuses on rapid-fire capabilities rather than firepower, the Kyrios Gust’s GN Long Barrel Cannon emphasizes the ability to accurately hit targets at extremely long distances under unstable atmospheric conditions.[1][3][4] Usable in both MS Mode and Flight Mode, the cannon can achieve high accuracy by operating with the sensors in the Flight Mode’s nose unit.[1][3][4]

The Kyrios Gust retains the normal Kyrios’ GN Beam Sabers.[1][3][4] A melee weapon that emits a beam blade made of GN Particles from its hilt when drawn, one is stored on the underside of each rear skirt armor and they are handheld when used.[7][8][9] This weapon was only equipped by the Gundams at the beginning of the Celestial Being's armed interventions and gave them an advantage in melee combat.[7][8][9]

Most people came to associate the Gundam Kyrios Gust with the incident known as “Meteor Nacht”, which occurred several months after Celestial Being began its armed interventions.[1][10] The Union had transported a large number of asteroids from the Martian orbit to Lagrange 1 as raw materials for the construction of space colonies.[1][10] An explosion of unknown origin then occurred, leading to one of the larger asteroids being sent on a collision course with Earth [1][10][11] Unbeknown to most people, that asteroid housed one of Celestial Being’s secret warehouses, and an accident within ignited stored fuel supplies, resulting in the explosion that caused the movements of the asteroid.[10]

The Union mobilized its armed forces to stop the asteroid, but unfortunately they lacked the means to destroy an object of that size and were at a loss.[10] Meanwhile, Celestial Being’s quantum computing system, Veda, advised against taking any actions.[10][11] It was afraid that responding to the crisis would make others suspect a link between the asteroid and the organization, jeopardizing the hidden facilities in other asteroids.[10] Veda also predicted that due to the warehouse inside of it, the asteroid would break apart during atmospheric entry into extremely small fragments.[10] However, Ptolemaios team’s tactical forecaster, Sumeragi, concluded that this could still have a devastating impact on the Earth’s surface.[10] The Ptolemaios team then held a meeting to discuss their response.[10] Tieria was on another mission and thus not present.[10] After some discussion, Setsuna, who had remained silent till then, remarked that launching the Gundams was not an issue and immediately left for the hangar.[10][11]

Lockon nodded his head in agreement and explained that they had already used the Gundams to save people during an earlier incident involving HRL’s Orbital Elevator.[10][12] Therefore, their action this time should not arose any suspicions.[10] He then noted that the Gundam Meisters for this mission are the same as the HRL incident.[10][12] The Dynames was transported to Earth, equipped with the super substratospheric altitude gun, a huge gun that can snipe targets outside the atmosphere from the ground.[1][10][11] Exia was stationed in outer space in the form of Avalanche Exia'.[10][11] Seeing as the Exia lacks large-size weaponry, approaching the asteroid was a necessity, and hence the Avalanche Dash equipment was chosen to ensure mobility.[10][11] Lastly, the Kyrios Gust was deployed in the atmosphere.[1][10][11]

In the Kyrios Gust, Allelujah spotted the myriad of fragments descend and glitter through the atmosphere.[10] “Great job, Setsuna, ” Allelujah praised.[10] The fragments were smaller than anticipated, their numbers numerous.[10] This means their vanguard, the Avalanche Exia’, had broken the asteroid into finer fragments.[10][11] “I won’t lose,” affirmed Allelujah, pushing the control stick forward.[10] The Kyrios Gust accelerated, glittering particles spewing from its boosters.[10] Below, the Dynames opened fire as well.[1][10] Switching between Flight Mode and Mobile Suit mode, the Kyrios Gust shot down the fragments in succession, fully displaying its mobility.[10]

To save people, they utilized the Gundams.[10] This was a mission welcomed by Allelujah.[10] “Of course, not every mission can be like this,” said Allelujah, knowing full well that he was a member of a private, armed organization with a resolution to fight to the bitter end.[10] He then noticed unusual movements amongst the splinters of the asteroid in the sky.[10] It was a Union Flag attacking the fragments with all its might.[10] “If we eradicate conflicts…” said Allelujah, trailing off, “Mankind can become one,” he believed.[10]

The Union Flag was piloted by Deborah Galiena, a pilot of the United Nations.[1] She saw the Kyrios Gust in action from several hundred meters away and later described it as a luminous flying silhouette that looked like an angel.[1] Indeed, the Gundams can be said to be angels in this incident.[1] The asteroid fragments that showered the ground that day did not result in considerable causalities or damage, contrary to experts’ expectations.[1][10] Many citizens had witnessed the Gundams’ valiant actions, and although the Union attempted to label the ordeal as a terrorist event by Celestial Being, they were unsuccessful.[10] 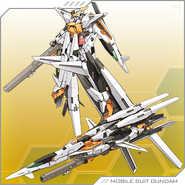 Retrieved from "https://gundam.fandom.com/wiki/GN-003/af-G02_Gundam_Kyrios_Gust?oldid=466778"
Community content is available under CC-BY-SA unless otherwise noted.