The Gundam Dynames R3 is a mobile suit deployed by the Celestial Being when the paramilitary organization resumed its armed interventions following the ELS incident and the resulting chaos in the earth sphere.[1] Incorporating the latest technology, this machine is the third refitted version of the Gundam Dynames and is piloted by Laetitia Erde, a new Gundam Meister and an Innovade with the same DNA base sequence as Tieria Erde.[1][2][3][4] The development of Dynames R3 and birth of Laetitia were planned based on Graham Aker being recruited by Setsuna F. Seiei to be a Gundam Meister.[1] To Tieria, Setsuna and Graham are similar as they can behave rashly in battle, thus there need to be someone who can act calmly and provide support during combat.[1]

The Dynames R3 is designed to provide medium-range support for Graham's melee-oriented Gundam Exia Repair IV.[1] However, the mobile suit itself is highly versatile and can be used for any missions.[1] It is also configured with heavy firepower reminiscent of Tieria's Gundam Virtue, and this is because Laetitia is given Tieria's memory and thus has identical combat experience.[1][2][3][4] The Dynames R3's primary armament is a new version of the Virtue's GN Bazooka, which is lighter and slimmer after taking into consideration the mobile suit's weight balance.[1][4][5] The weapon is also designed to be easier to use.[1]

Some of the advanced technologies utilized in the latest Gundams (like 00 Qan[T]) was incorporated and this is reflected in the design of the Dynames R3's GN Shields.[3][4] Not only can the pair of GN Shields deploy GN Field for defense, they also house GN Cannons for offense, and the GN Particles released from these shields can be used for propulsion.[1][5] Additionally, through rearrangement of parts, the GN Shields can change into large, forearm-mounted shields, resembling the GN Shield of the Gundam Nadleeh, another of Tieria's previous Gundam.[1][5] For melee combat, the Dynames R3 has a pair of GN Beam Sabers that are stored on the rear skirt armor.[1][5]

As the upper body of the Dynames R3 is heavily equipped, the front skirt armor are fitted with a pair of GN Verniers to enhance the mobile suit's mobility.[4] Similar to the original Dynames, the Dynames R3 has a hidden camera eye in its forehead that is deployed when the head antenna slides down.[1][5] The Dynames R3 is powered by a GN Drive Tau, which has improved GN Particles production capability due to technological innovation.[1][5] As the similarly GN Drive Tau-powered Exia Repair IV is equipped with the Trans-Am System, the same is presumably true for the Dynames R3. When the Trans-Am System is activated, Dynames R3's specifications are improved more than three-fold for a brief period of time and the mobile suit also glows red as a side-effect.

Also known simply as "Burst Mode", this is the GN Bazooka's maximum particle output form.[1] In this mode, the Dynames R3's chest armor lifts up, and the GN Bazooka's rear end slides out for connection to the mobile suit's chest.[1] Additionally, the weapon's barrel splits in half and the inner yellow-colored barrel parts slide out.[1]

The Dynames R3 is equipped with a pair of GN Shields which are in the form of movable, shoulder binders.[1][5] The GN Shields can generate GN Field to increase defensive capabilities, and each shield also houses a twin-barreled GN Cannon for offensive purposes.[1][5] Furthermore, the GN Shields can be used for propulsion by adjusting their particle emission.[1] Another feature of the GN Shields is that they can be removed from the shoulders and be used as forearm-mounted weapons.[1][5] Through rearrangement of parts, the GN Shield can also change into a large shield that resembles Gundam Nadleeh's GN Shield.[1][5] This serves to make the Dynames R3's GN Shields easy to use for its pilot, Laetitia Erde, who has the memory of Nadleeh's pilot, Tieria Erde.[1]

A melee weapon that emits a beam blade made of GN Particles when used.[1] It is a basic armament that has been equipped since the 1st generation Gundam due to its high reliability.[1] The Dynames R3 has a pair of GN Beam Sabers stored on its rear skirt armor, and they swing out to be drawn by the mobile suit's hands.[1][5]

A defensive barrier made of GN Particles, the GN Field is able to block most physical and beam attacks. The Dynames R3 can generate a GN Field using the GN Particles released from its GN Shields, enhancing its defensive capabilities.

When activated, this system enhances Dynames R3's thrust and defensive capabilities, as well as boost its output by threefold for a limited time. The entire Gundam also glows red as a side effect and afterimages are generated during movements. 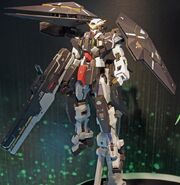