Mobile suits are highly versatile weapons capable of operating in various environment such as land, air and space due to their humanoid form, but there is one environment where the humanoid form is ineffective: underwater.[1][2] Transforming into an alternate form to adapt to the environment, similar to what aerial mobile suits have done, is difficult in water due to the fluid surrounding the machine and the strong underwater pressure.[1][2] Therefore, mobile suits are unable to become the primary weapons for aquatic combat, with ships and mobile armors continuing to reign supreme in this field.[1][2] Despite this, various nations continue to develop and deploy aquatic mobile suits, but their performance tends to be below expectations.[1][2] However, there is always exception and the Gundam Dynames Torpedo is one such example.[1][2]

The Gundam Dynames Torpedo is the Celestial Being's Gundam Dynames fitted with the Torpedo equipment.[1][2] It is based on the novel concept that since mobile suit is ineffective underwater, there is no need for it to enter the water.[1][2] As such, it is designed to snipe underwater targets while remaining on land.[1][2][3][4] The Dynames Torpedo has two main features: a massive, sub-aquatic sniper rifle called "DG014" that fires GN Torpedoes, and sensor systems on its face and left shoulder for better adaptation to coastal climate, underwater enemy detection as well as for control of the GN Torpedoes.[1][2][3][5] It was named “Torpedo” due to its ability to fire GN Torpedoes.[1][2][4] The Torpedo equipment weighs 6.9 metric tons, but this is under the influence of the mass reduction effect of the GN Particles produced by the GN Drive.[1][2][6] When detached from the Dynames, the equipment becomes heavier. [1][2]

A massive, sub-aquatic sniper rifle used by Dynames Torpedo to snipe underwater enemies while remaining on land.[1][2][3][5] DG014 stands for "Dynames Custom Gun Number 14".[1][2] However, it is unknown if there really were 14 types of guns, and there is a possibility that there are gaps in the development numbers.[1][2] The rifle fires GN Torpedoes that are thought to used GN Particles obtained from the Gundam for underwater propulsion, and after hitting the target, they release high-energy GN Particles to destroy the enemy from the inside (as no actual fragments or unexploded GN Torpedoes were recovered, the above descriptions are conjectures based on observations of destroyed machines).[1][2][3][4]

A cylinder-shaped "Special GN Condenser" is mounted on the bottom of the rifle, and use of the GN Particles stored within it allows for rapid firing of the GN Torpedoes.[1][2][4] Like the GN-001 Gundam Exia's GN Sword, this rifle is attached to the socket on Dynames' forearm to receive power from the Gundam's GN Drive.[1][2] It is also connected to the Gundam's right shoulder via an articulated rifle fixation arm.[1][2] Like the Dynames' GN Sniper Rifle, Lockon operates the DG014 through the precision shooting scope in the cockpit, but the Gundam's head does not change into "Sniper Mode".[7]

A melee weapon that emits a beam blade from its hilt when drawn, one is mounted on the left and right sides of the Dynames' rear waist unit, and they have the same capabilities as those of other Gundams'.[1][2][5][8] As the Dynames is not intended for aggressive melee combat, the pair of sabers were only used when enemies came into close proximity.[5]

Mounted over the Dynames Torpedo's eyes, the pair of goggles enable the Gundam to adapt to the coastal climate and enhanced its long-range vision for ranged combat.[1][2] However, if the enemy manages to come into close proximity, the goggles become a hindrance and are purged immediately.[1][2]

A disc-shaped equipment mounted on the left shoulder.[1][2][4] The GN Torpedo can gather data as it travels underwater and the data is sent to the sonar, resulting in more precise location of the enemy.[1][2][4]

Celestial Being utilizes small versatile robots with individual AIs for support and maintenance work.[5][9] Called Haro, one of them serves as a partner for Lockon during missions and can be placed on a circular dock located on the right side of the Dynames' cockpit.[5][7][9] This Haro acts like a sub-pilot, providing a variety of control support, such as weapons and system adjustments, and through Veda, it can receive information from third party that is critical to the mission.[7][9]

The Human Reform League's Orbital Elevator, "Heaven's Pillar", is built on the ocean and this made it an easy target for terrorists. Therefore, it was a hotspot for conflicts between HRL and terrorists. A young Robert Spacey once stayed in the city at the base of the elevator for several months in hopes of seeing a Gundam conducting an armed intervention there. However, the wait was in vain and he eventually gave up. Robert then travelled to a neighboring country's island resort as he heard the United Nations' Ms. Deborah Galiena was there; he wanted to see her out of her usual pilot suit and in a swimsuit. Unexpectedly, he ended up seeing the Gundam Dynames Torpedo and was amazed that it was attacking its target in the elevator's surrounding waters from several hundreds of kilometers away.

For several weeks, Lockon Stratos and his Gundam Dynames Torpedo had been carrying out intermittent armed interventions to stop the conflict between HRL forces protecting their Orbital Elevator and terrorists seeking to attack the structure. During one such intervention, a MAJ-03 Shuichai used by the HRL was detected in the surrounding waters. Lockon tried to snipe the mobile armor, but the GN Torpedo missed and Haro explained that this was because the enemy unit had released highly concentrated jamming substances, preventing a lock on.

Haro was then asked by Lockon to increase the sensors' sensitivity, but this proved futile. As he was unable to snipe the target, Lockon prepares to retreat before HRL's reinforcement arrived. Just then, Haro somehow detected the mobile armor and Lockon successful sunk it with the GN Torpedo. Unbeknownst to them, Veda had earlier predicted the HRL might try to thwart the armed intervention and thus another machine was deployed underwater to assist Lockon. Through Veda, data collected by this machine was relayed to the Haro, allowing Lockon to complete his mission successfully. 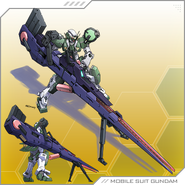 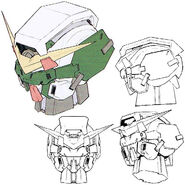 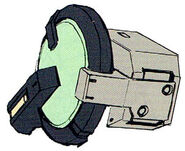 Retrieved from "https://gundam.fandom.com/wiki/GN-002/DG014_Gundam_Dynames_Torpedo?oldid=497917"
Community content is available under CC-BY-SA unless otherwise noted.