In preparation for the looming decisive battles against the UN Forces, the Celestial Being deployed the enhancement and support machine – the GN Arms, of which the GN GN Arms Type E is for GN-001 Gundam Exia and the GN Arms Type-D is for Dynames.[1][2][3] Each GN Arms can dock with their Gundam partner to form the GN Armor, with the GN Armor Type-D being the combination of GN Arms Type-D with Dynames.[4][5] As per the name, the GN Armor provides the Dynames with enhanced mobility, offensive and defensive capabilities, revealing the ultimate power of the Gundam.[3][4][6]

With the GN Armor Type-D, the Dynames' long-range shooting capabilities are boosted by the GN Arms Type-D's GN Twin Rifle and the Large-Size Missile Container, both meant for anti-fleet combat, and the support machine's Large-Size GN Cannons and Claws are also available for ranged bombardments and close combat respectively.[1][3][6][7] Furthermore, the GN Armor Type-D can deploy a GN Field for better defensive capabilities, and the machine's performance can be enhanced for a brief period of time when the docked Dynames activates Trans-Am System.[3][8][9][10] As the Dynames' arms are free to move while in GN Armor Type-D, it is possible for the Gundam to use its own weaponry.[3][6] The GN Arms Type-D also benefited from the combination as it gains access to the Dynames' GN Drive via the Gundam's cone thruster, allowing its capabilities to be utilized at their full potential.[3][6][7]

To form the GN Armor Type-D, the GN Arms Type-D has to undergo a quick and simple transformation where it expands and opens up for docking with Dynames.[3][7] During the transformation, the GN Arms Type-D's top sections tilt backwards, the center block containing its cockpit flips to the rear and exposes the connector for the Dynames' cone thruster, the two folded leg-like parts at the bottom containing the mount latches for the Dynames' feet expand and rotate downward, the two arm-like units containing the GN Twin Rifle and Large-Size Missile Container position further to the sides, and the wings are folded up against the main body.[3][7] The Dynames simply attaches to the three aforementioned docking points to form the GN Armor Type-D, and can easily eject from the machine when needed to fight on its own.[3][7][8]

A pair of claws are mounted on the tip of the leg-like parts at the bottom of the GN Armor Type-D.[1][3][7] Each claw has three prongs that unfold for close range offensive/defensive use.[1][3][7]

Also known as 'Large GN Cannon', two of this large caliber beam weapons are mounted at the top of the GN Armor Type-D.[1][4][7] Their firepower are comparable to GN-005 Gundam Virtue's GN Bazooka.[7] Due to their high GN Particle consumption, the cannons perform at full power only in the GN Armor form.[7] In his final battle, Lockon connected one of the Large-Size GN Cannons directly to the Dynames' rifle-shaped controller for sniping.[7][8]

Mounted on the GN Armor Type-D's right side, its twin barrels are folded when the machine is cruising and unfold during use.[7][8] The GN Twin Rifle's firepower is weaker than the Large-Size GN Cannons', but it has high accuracy against targets at long range.[3][7] It can be used in conjunction with the Large-Size GN Cannons to sink enemy ships.[8]

A container carrying hundreds of GN missiles equipped on the left side of the GN Armor Type-D, it is also known as 'Ultra Large GN Missile Pod'.[1][5][7][8] The missiles, fully charged with GN Particles before hand, have high destructive power.[7] Exceptional combat results can be achieved when the missiles are fired en masse after the GN Armor breaks into the enemy fleet.[7]

A section of the GN Arms Type-D component's folded wings can function as Clavicle Antennae, increasing GN Particle control capabilities.[1][3][7] With this, the GN Armor Type-D can manipulate the released GN Particles to form a spherical particle barrier, the GN Field, around itself for defensive purposes.[3][8]

When the docked Gundam Dynames activates its Trans-Am system, the system's effect of boosting performance is extended to the GN Armor Type-D.[9][10] For a brief period of time, this system enhances thrust and defensive capabilities, as well as triples the machine's output.[9][10] The GN Armor Type-D glows red as a side effect and afterimages are also generated during movements.[9] Furthermore, the GN Arms Type-D component also received more GN Particles from the Dynames, as the Trans-Am system releases all of the Gundam's accumulated particles.[10]

During the UN Forces' second attack on the CBS-70 Ptolemaios, Lockon and his GN Armor Type-D launched mid-way through the battle and took out a number of the enemy's GNX-603T GN-Xs with a barrage of GN Missiles. The GN Armor Type-D then sped off to assault the UN Forces' Virginia-class carriers, sinking two with its beam weaponry. However, before the last carrier could be sunk, the GN Twin Rifle was destroyed by Ali al-Saachez's GNW-002 Gundam Throne Zwei. Subsequently, the GN Arms Type-D component was heavily damaged by the enemies' attacks, forcing Lockon to eject the Dynames to continue the fight. The Dynames was later incapacitated, and Lockon left the Gundam with the rifle-shaped controller in hand. He then found one of the wrecked GN Arms Type-D's Large-Size GN Cannons, connected the rifle-shaped controller to it, and shot down the Throne Zwei using the cannon. As the Throne Zwei exploded, it fired a beam shot in retaliation, destroying the Large-Size GN Cannon and killing Lockon. 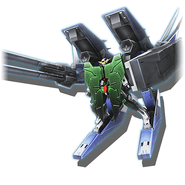 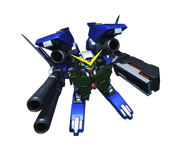