The GN-001 Gundam Exia (aka Exia, Gundam Seven Swords) is one of the Gundam-type mobile suits featured in season one of Mobile Suit Gundam 00. It is piloted by Setsuna F. Seiei.

A 3rd-Generation Gundam, Exia is designed as a close quarters combat (CQC) mobile suit (MS). It is the successor to GNY-001 Gundam Astraea and one of the predecessors to GN-0000 00 Gundam. Much of Exia's design was heavily influenced by the Gundam Astraea. What this means is that even though Exia's weapons are specialized for CQC, its basic performance is still that of a general purpose MS. This is mostly evident as Exia is the only Gundam out of the four main 3rd Generation units that retain a MS frame that has human-like range of motion. The lack of this range of motion on the other three units is not considered a weakness but rather because it was deemed unnecessary.[1]

Gundams (and by extension other GNMS) benefit from the mass/weight reducing effects of GN Particles, and this effect can also be used for mass/weight alteration of various body parts. Because of this, the pilot can freely control the suit's inertia, influencing maneuverability when it is in the airborne. In space, this ability is transformed into Active Mass Balance Auto Control (AMBAC). As such, the legs actually never need to "walk" when moving.[1]

As Exia was designed as a close quarters unit, there is a need for its movements to be as human-like as possible. In order to achieve this, Exia was designed with joints that have the same range of motion as a human. To ensure that Exia's range of movement is not affected, its armor is separated into much finer pieces than the other Gundams. The latter trait also means that portions of the internal structure are revealed during certain postures. Although this lowers Exia's overall defensive ability, it served Exia as it has the lowest "being hit" rate among the four main 3rd Generation Gundams.[1] Exia's mobility also exceeds that of other conventional mobile suits of the time with the exception of customized high speed variants.[2]

Externally, the most eye catching feature of Exia is the numerous purple cables on its body; especially the cables that extend from the shoulders to the arms that are not present in the other Gundams. Named GN Power Lines (also known as GN Cables), their main purpose is to transport large amounts of GN Particles to and from various parts of the body. As Exia frequently engages the enemy in close quarters, its higher amount of exposed cables allows it to have finer posture control than the other Gundams. This design optimizes mobility at the cost of defensive capability and is considered a liability, this issue was later fixed in the Exia R2 as the GN Power Lines are now internalized within the armor.[1]

Appearance wise, Gundams have heads that are human-like. The head of Gundams are said to be similar to a human brain as it also controls the functions of the body. Exia's head design is modeled after the pilot helmet worn by earlier Gundam Meisters. This was done to cement the belief of the Meister being the Gundam. Third Generation Gundams like Exia also possess head antennas that control particle distribution, though most of the actual particle control responsibility is taken up by the antennas around the base of the neck. The head also has other head antennas that function as communication and sensor devices while at the same time also containing a blackbox device used for establishing a link with Veda.[1]

Its GN Condensers also can show visually the amount of particles it holds as well as the particle compression rate it is currently using. This ability is also used for secret communication with friendly forces.[1] The total energy output of Gundams like Exia is extremely powerful compared to other conventional suits of the time. Billy Katagiri estimated that Exia has approximately six times the output of the SVMS-01 Union Flag based on his analysis of the the impact damage on Graham Aker's suit after his first encounter with Exia.[3]

One of Exia's important intended roles is to deal with any traitor units that use GN Field technology.[4][5] To counter any GN Field usage, Exia's solid swords are all designed with the ability to easily pierce through them.[4] Early on, this role was to be shared by both Exia and GN-005/PH Gundam Virtue Physical but after the latter's usage was dropped by Veda in favor of GN-005 Gundam Virtue, the task fell solely on Exia. The change in plans also meant that Exia's pilot would shoulder a higher level of responsibility.[5]

The Exia has a "GN Drive Burst Mode" function that can temporarily increase the output of its GN Drive and hence the ability of the suit, but it was rarely used due to its instability. It would later be used by the Exia Repair II that has inherited the function.[1][6] Exia's overall capabilities can also be tripled briefly through the Trans-Am System. When heavier firepower and defense is needed, Exia can receive combat support from GNR-001E GN Arms Type-E and the Assault Container. The GN Arms Type-E is an enhancement and support machine developed specifically for Exia, and the two can dock to form the powerful GN-001+GNR-001E GN Armor Type-E. The Assault Container works in conjunction with the GN Arms Type-E and Exia as a miniature armed MS carrier. It can carry both machines for atmospheric entry and exit, and has multiple weaponry to provide fire support during battle.

Mounted on the back of the shoulders. The beam saber is a hilt with the ability to activate a beam blade by generating a positron field filled with GN Particles.[7] While the beam saber has a high power rating, one disadvantage is its performance can be decreased by the surrounding atmospheric conditions or methods of beam diffusion.[8] One can be used as a reserve weapon, or both can be used simultaneously in a twin sword fashion.

Stored on Exia's rear waist, the GN Beam Daggers share the same basic system as that of the GN Beam Sabers but are adjusted to have a shorter blade that makes them harder to diffuse.[8] Setsuna has developed a habit of throwing them at distant enemies during combat.[8]

These are Exia's customized solid swords that differ in size from the main GN Sword and are the weapons that had the longest development time among all of Exia's armaments.[8] Because the GN Sword has difficulty doing damage without a certain amount of swing and space due to its size,[9] these were designed to give the Exia solid blades that can be used in a variety of situations that the GN Sword has difficulty with. They possess the ability to cut through 3 meters of conventional E-Carbon armor.[10][11] Like the GN Beam Daggers, Setsuna occasionally uses the GN Short Blade as a throwing knife.[12] When not in use, they are stored on the hips.

A shield mounted on Exia's left arm that is made out of E-Carbon[1] At first glance, the shield can be thought of as unnecessary as it is made of the exact same material as the body's main armor. However, due to the flexibility of the arm, the mounted shield can help to absorb shock from attacks. On the surface of the shield, a GN Field can be generated that would confer better defenses to the user.[1] As long as Exia continues to receive GN Particle energy supply, conventional weapons would not be able to penetrate the GN Shield.[1] The shield also possesses an "expansion" mode where the left and right blue sections move outwards and increase the defense area of the shield, but the drawbacks of this mode are increased particle consumption as well as a decrease in the overall defense property of the shield due to the increased area that GN Field element covers.[1] Although the shield is extremely effective against conventional weapons, it can be overwhelmed by stronger attacks from GN Particle based weaponry and has been destroyed by these attacks on a few occasions.[12][13]

A solid GN blade attached to a small shield-like piece, it serves as the Exia's primary weapon and is the largest blade amongst the Seven Swords. It works by applying GN Particles over the solid sword which greatly increases the sharpness and cutting power[1] though the sword can still be used when there are no particles applied to it.[1] Although the blade is considered to have great destructive power,[8] there are situations where it cannot be used due to its size.[1][8][9] The GN Sword can also be used in Rifle Mode, whereby the blade returns to its idle folded state exposing the muzzle of a beam rifle. The Rifle Mode was created to avoid the equipping of excessive armaments on Exia,[1] and thus enhance the ease of movement which the unit's systems depend heavily on.[1]

Small guns installed in both forearms.[8] Purely secondary weapons, these low powered weapons are equipped with the main purpose of diversion.[8] While the GN Sword's Rifle Mode has high power, it requires a transformation action and can't respond instantly, thus the GN Vulcans were installed to counter this weakness.[8] Though the power of their beams is weak, their high firing rate means that they can be a threat to conventional weapons that lack E-Carbon armor.[8] This is also very useful when engaging small, maneuverable targets such as GN Fangs and missiles.

As its name suggests, it is a prototype of Exia's GN Sword. Even at the time of the construction of this weapon, there is already a plan for a rifle function to be included and the "Proto" part of the name refers to the incompleteness of the weapon as it's still in development. It was used by Exia during its basic performance test as the GN Sword had yet to be completed.

The operating system used by the Gundams is linked to Veda, allowing the super computer to provide support to the Gundams and their pilots. After this link was permanently cut,[14] the Ptolemaios team were forced to switch to an alternate and inferior stand-alone system that they independently developed.[14]

After the intervention at Ceylon (Gundam Perfect File) 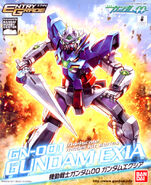 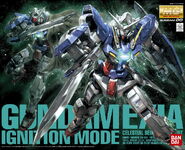 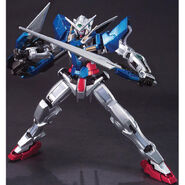 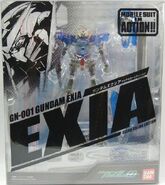 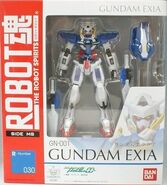 Retrieved from "https://gundam.fandom.com/wiki/GN-001_Gundam_Exia?oldid=441487"
Community content is available under CC-BY-SA unless otherwise noted.