The Gundam Avalanche Exia is the Celestial Being's Gundam Exia equipped with additional high mobility unit known as "Avalanche Unit".[1][2][3][4] The Gundams have exceptional flight control capabilities through the use of GN Particles, but their speed in the atmosphere and in space are generally inferior to that of specialized high-speed units such as aircrafts.[1][2][5] Celestial Being's general mechanic, Ian Vashti, designed and created the Avalanche Unit to grant Exia a high level of mobility comparable to an aircraft's.[2][3][5] This concept of utilizing a mobile suit like an aircraft is very similar to the AEU's, and might have been because Ian was previously the chief mechanic of AEU's armed forces and is highly skilled in such utilization of mobile suit.[2][3][5]

The multiple parts that make up the Avalanche Unit are equipped with GN Condensers and by discharging all their stored GN Particles through various verniers simultaneously, the Avalanche Exia can achieve a higher level of mobility.[2][3][4][5] Additionally, during high-speed movements, the Avalanche Exia's forearm and shoulder parts are linked together in a quasi-transformation like manner.[2][3][5] This reduces air resistance and generates a thin GN Field on the machine's surface to control the airflow on the exterior.[2][3][4] The name, Avalanche, carries the meaning of "passing by in an instant, consuming everything in its path" and like its name, the mobile suit can outspeed the latest aerial combat mobile suits such as the SVMS-01 Union Flag, AEU-09 AEU Enact and even its fellow Gundam, the transformable, high-speed GN-003 Gundam Kyrios.[2][3][5][6] The "hs" in its model number stands for "High Speed" and the "A01" means "Avalanche type Unit 1".[2][3][4][5]

The Avalanche Unit's GN Condensers are larger than regular ones and can be charged with more GN Particles.[2][3][5] Unlike the regular GN Condensers that can display information about their status on the surface, the Avalanche Unit's GN Condensers are completely internalized and so their status are instead displayed on the Gundam's chest GN Condenser.[2][3] As the Avalanche Unit's primary purpose is for high-speed movement, it does come with additional weaponry.[2][3] All the weapons of the normal Exia remain usable by the Avalanche Exia, but due to its higher speed, the Exia's characteristic seven swords have improved penetration and destructive power.[2][3][4][5] To prevent the seven swords from being a hindrance during high-speed movements, they are all stored on the Avalanche Exia's upper body, with the majority mounted on a pair of weapon holders known as "Weapon Arms".[2][3][4][5]

The Avalanche Exia was seen relatively early during Celestial Being's armed interventions, and the Avalanche Unit's weight is kept below 5 tons as that was initially thought to be the maximum possible weight without negatively affecting the Gundam's balance.[2][5] However, this assumption was later found to be wrong, and additional equipment is developed for the Avalanche Exia, resulting in the GN-001/hs-A01D Gundam Avalanche Exia', which is better adapted for operating in space.[4][7] To prevent the Avalanche Unit from being a dead weight after use, its parts can be instantaneously purged from the Exia prior to the Gundam engaging in close combat.[2][3]

The GN Sword is the normal Exia's primary weapon and it is also wielded by the Avalanche Exia.[3][4][5] It is stored on the weapon arm located on the right upper back when not in use, and attached to the Avalanche Unit parts on the right forearm when in use.[2][3][4][5] It is the largest among the Exia's seven swords and its blade is coated in GN Particles, granting high cutting capability.[3][4][8][9] Although the GN Sword has high destructive power, its large size made it unusable in certain situations, such as in narrow battlefield.[3][4][8] The GN Sword can also function as a beam rifle by transforming to Rifle Mode, where the blade is folded to reveal the rifle's muzzle.[3][4][8][9] The Rifle Mode is also the form the GN Sword is in when the weapon is not in use.[2][3][4][5]

A pair of GN Beam Sabers are stored on the back of the shoulder-mounted Avalanche Unit parts.[3][4] A beam blade made of GN Particles is emitted from this close combat weapon's hilt when it is drawn.[3][4][8][9] While the GN Beam Saber has high power, it has a weakness where its power can be reduced due to atmospheric conditions and beam scattering/diffusion measures.[3][4][8]

A GN Beam Dagger is stored on each of the weapon arms located on the upper back.[3][4] The GN Beam Daggers have the same basic system as the GN Beam Sabers, but adjusted to emit shorter beam blades that consume less energy and also make them harder to diffuse.[3][4][8][9] Thus, they are suitable to be used as throwing weapons to pierce distant enemies, and Exia's Gundam Meister, Setsuna, often used them in this manner.[3][4][8][9]

A pair of physical swords with different length, one long and one short, their blades are enveloped with GN Particles, enabling extraordinary cutting and piercing capabilities.[2][3][4][5] Known collectively as GN Blades, they took the longest time to develop among Exia's seven swords and hence were unavailable during Celestial Being's initial missions.[2][3][4][5] Capable of penetrating GN Field, they are designed for use against Gundams and other GN Drive equipped unit.[3][4][8][9] Both weapons are stored on the weapon arm located on the left upper back when not in use.[2][3][4][5]

The same defensive armament as used by the normal Exia.[2][5] It is made of E-Carbon and can deploy a GN Field on its surface to achieve high defensive capabilities.[8][9] As long as the GN Shield receives energy from the Gundam, conventional weapons cannot destroy it.[8][9] However, as the defensive capabilities of the Gundam itself is already high, and since the GN Shield may be a hindrance when dual wielding weapons in close combat, the Avalanche Exia can be launched without it.[2][5][10]

The Avalanche Exia can use the normal Exia's GN Vulcans even with the Avalanche Unit parts attached to the forearms.[2][3][4][5] These two small beam guns are built into the forearms, as although the GN Sword's Rifle Mode is powerful, it cannot react instantaneously since transforming action is required.[3][4] The GN Vulcans have low firepower, but their beams can be rapid-fired intermittently and they are effective in restricting enemy movements, damaging convention weapons without E-Carbon armor, etc.[3][4]

The Avalanche Exia is presumed to retain Exia's ability to deploy an external camouflage membrane over itself when stationary, blending it into its environment and making it look invisible. This allows the Gundam Meister to leave the Gundam behind to carry out mission on foot, or for the Gundam to remain unseen as it waits for the mission to commence

A pair of weapon holders located on the Avalanche Exia's upper back, one on each side.[2][3][4][5] While the two weapon arms are identical, the left unit has a special adaptor for holding the GN Long Blade and GN Short Blade.[2][3][5] Sections of the weapons arms are movable; they can flip down and then slide under the shoulders to facilitate the deployment of the two GN Blades and the GN Sword.[2][3][5]

In AD 2307, Robert Spacey was a young historian specializing in political history. He accompanied an UN inspection of the Union's armed forces due to his interest in politics, as at that time, the Union was having difficulties increasing its military capabilities in South America. As he was talking with Ms. Deborah Galiena, a mobile suit pilot of the UN inspection team, the Union base's alarm rang and the Avalanche Exia appeared overhead not long after. The Union immediately launched its squadron of SVMS-01 Union Flags. However, the Union Flags, which have faster flight speed than the Exia, failed to catch up to the Avalanche Exia and were quickly left behind. The entire incident was over in an instant. The shiny GN Particles trailing behind the Avalanche Exia as it flew past made a deep impression on Robert. The thought of trying to catch up to that silhouette brought Robert down the path of becoming a mobile suit development historian, completely changing his life.

Through information from Veda and Celestial Being's operatives, the Ptolemaios team became aware of a plot to launch a virus based bioterrorist attack. Allelujah, piloting his GN-003 Gundam Kyrios, was sent to bomb the virus' production facility and prevent the attack. Unfortunately, some of the virus was transported out of the facility before the attack. An hour after Kyrios' bombing, the virus was spread in a city near the AEU's Orbital Elevator. The team's doctor, Moreno, volunteered to go to the affected city with the cure, and Setsuna proposed using the Avalanche Exia to take him there. Moreno had preemptively produced sufficient amount of antiviral drug based on the virus samples he had received from the operatives early on. The problem was that according to Veda's prediction, the virus spreads extremely quickly and treatment must be administered within 30 minutes after the outbreak to avoid a disastrous outcome. However, Avalanche Exia's flight time is only 10 minutes and insufficient to reach the city.

To solve this problem, Sumeragi suggested they lighten the Avalanche Exia by removing its armaments and concentrating its supply of GN Particles to its verniers. Five minutes later, both Setsuna and Moreno launched in Avalanche Exia. Seated behind Setsuna, Moreno complained that the seat prepared by Ian was too cramp and uncomfortable. While the ride was a little bumpy, it was very fast and Moreno noted that they should make it in time. However, a squad of AEU-09 AEU Enacts suddenly appeared. As they did not have time for a battle, Setsuna decided to outrun the enemies. The Avalanche Exias shoulders and arms then linked together, and large amount of GN Particles are discharged, allowing the Gundam to fly at a faster speed. Moreno was caught off guard by the sudden acceleration and had difficulties breathing. At the same time, he was impressed by how the Gundam Meisters were able to battle under such tough situations. The Avalanche Exia sped past the Enacts and reached the affected city within the time limit. 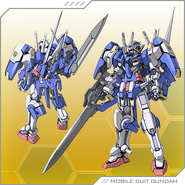 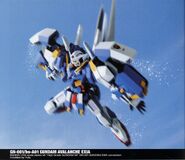 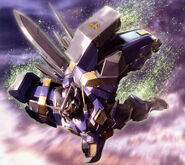 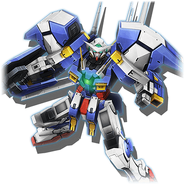 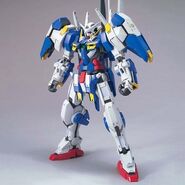