The GN Sword is the normal Exia's primary weapon and it is also wielded by the Avalanche Exia'.[1][2] It is stored on the weapon arm located on the right upper back when not in use, and attached to the Avalanche Unit parts on the right forearm when in use.[1][2] It is the largest among the Exia's seven swords and its blade is coated in GN Particles, granting high cutting capability.[1][7][8] Although the GN Sword has high destructive power, its large size made it unusable in certain situations, such as in narrow battlefield.[1][7] The GN Sword can also function as a beam rifle by transforming to Rifle Mode, where the blade is folded to reveal the rifle's muzzle.[1][2][7][8] The Rifle Mode is also the form the GN Sword is in when the weapon is not in use.[1]

A pair of GN Beam Sabers are stored on the back of the shoulder-mounted Avalanche Unit parts.[1] A beam blade made of GN Particles is emitted from this close combat weapon's hilt when it is drawn.[1][7][8] While the GN Beam Saber has high power, it has a weakness where its power can be reduced due to atmospheric conditions and beam scattering/diffusion measures.[1][7]

A GN Beam Dagger is stored on each of the weapon arms located on the upper back.[1] The GN Beam Daggers have the same basic system as the GN Beam Sabers, but adjusted to emit shorter beam blades that consume less energy and also make them harder to diffuse.[1][7][8][9] Thus, they are suitable to be used as throwing weapons to pierce distant enemies, and Setsuna often used them in this manner.[1][7][8]

A pair of physical swords with different length, one long and one short, their blades are enveloped with GN Particles, enabling extraordinary cutting and piercing capabilities.[1][7][8] They took the longest time to develop among Exia's seven swords.[1][7] Capable of penetrating GN Field, they are designed for use against Gundams and other GN Drive equipped unit.[1][7][8] Both weapons are stored on the weapon arm located on the left upper back when not in use.[1][2]

The Avalanche Exia' can use the normal Exia's GN Vulcans even with the Avalanche Unit parts attached to the forearms.[1] These two small beam guns are built into the forearms, as although the GN Sword's Rifle Mode is powerful, it cannot react instantaneously since transforming action is required.[1][9] The GN Vulcans have low firepower, but their beams can be rapid-fired intermittently and they are effective in restricting enemy movements, damaging convention weapons without E-Carbon armor, etc.[1][9]

Mounted in the tips of the leg-mounted Dash Unit, the pair of GN Claws unfold when in use.[1][5][6] During close combat, a GN Field can be deployed to increase the GN Claws' destructive power.[1] Furthermore, a GN Beam Saber can be emitted from each claw's center.[1][2][6] By using these GN Beam Sabers alongside two other weapons held in the hands, the Avalanche Exia' can fight with a maximum of four swords.[2][6]

Like the Avalanche Exia, Avalanche Exia' has a pair of weapon holders located on the upper back, one on each side.[1][2][10][11] While the two weapon arms are identical, the left unit has a special adaptor for holding the GN Long Blade and GN Short Blade.[1][10][11] Sections of the weapons arms are movable; they can flip down and then slide under the shoulders to facilitate the deployment of the two GN Blades and the GN Sword.[10][11]

A mode that enhances the short range mobility of the Avalanche Exia'.[1] By scattering GN Particles at a high density within the battlefield, Avalanche Exia' is able to create favorable battle conditions for itself.[1] The data obtained from this mode later served as the basis for battles tactics during Trans Am.[1] Also, if the Avalanche Exia' were to use Trans Am, it would be in this mode.[1]

A special system hidden within the black box of the original GN Drives. When Trans-Am is activated, all the compressed high-density GN Particles accumulated in the Gundam are fully released, enhancing its thrust and defensive capabilities as well as allowing it to perform at three times its normal output for a limited time. The entire Gundam also glows red as a side effect and afterimages are generated during movements. However, this system is a double-edged sword, as once it ended, the Gundam's performance drops drastically. This negative effect will last until the stored GN Particles within the Gundam return to normal level.

The Gundam Avalanche Exia' was first deployed during the "Meteor Nacht" incident (previously mentioned in Mobile Suit Gundam 00V Chapter 6 and 00V Battlefield Record Chapter 2). In this incident, an explosion of unknown origin caused one of the larger asteroids at Lagrange Point 1 to head on a collision course with Earth. Although Veda did not support the deployment of the Gundams in response to the incident, the Gundam Meisters nevertheless decided to do their part in reducing the potential damage dealt to Earth. According to the plan, Setsuna and his Avalanche Exia' would serve as the vanguard and try to fragmentize the asteroid in space, Allelujah and his GN-003/af-G02 Gundam Kyrios Gust would intercept asteroid fragments that did not burn up in the atmosphere, and finally, Lockon and his GN-002 Gundam Dynames would provide assistance from the ground by shooting with the Super Substratospheric Altitude Gun.

Since this was Setsuna's first time piloting Avalanche Exia', Ian explained the Dash Unit's main features. When Ian asked if he had understood his explanation, Setsuna only replied with a simple "yes". Deciding to believe in Setsuna, Ian sent him off with a smile. As Avalanche Exia' approached the asteroid, Setsuna shot at it repeatedly using the GN Sword's Rifle Mode. However, he soon felt that while this method kept him safe, it was too inefficient. The Avalanche Exia' then moved closer and started attacking using two GN Beam Sabers in its hands and another two GN Beam Sabers emitted from the Dash Unit's GN Claws. This not only fragments the asteroid, but chopping off pieces of the asteroid can also alter its center of gravity, thereby changing its atmospheric entry angle and increasing the chance of it burning up in the atmosphere. Furthermore, this better suited Setsuna's combat style. In the few minutes left, Setsuna swung the four sabers as many times as he could, resulting in numerous fragments falling into the atmosphere. Having done his best, Setsuna retreated using the High-Speed Mode of the Avalanche Exia', leaving the rest in the capable hands of his fellow Gundam Meisters. 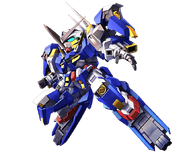 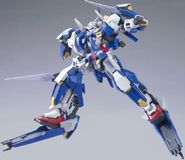