Full Armor 0 Gundam is the 0 Gundam equipped with add-on equipment that significantly improves the suit's capabilities but at the cost of higher particle consumption.[1] It was developed by Sherilyn Hyde when the 0 Gundam was with Fereshte as a means of strengthening the Gundam in case it needs to be deployed.[1]

The additional armors on the suit's body are actually GN Composite Armor which was first used on GNY-004 Gundam Plutone.[1] Besides improving 0 Gundam's defensive capability, the GN Particles within the GN Composite Armor also have the effect of reducing the equipment's weight.[1] Additional weapons are mounted on the armor and includes a Beam Bazooka, a Twin Beam Gun, and a pair of Gundam Vulcans.[1] The added armor can be cast off at any time and when it does, the large amounts of GN Particles within the GN Composite Armor will burst out and create a temporary defensive barrier that will protect 0 Gundam much like a GN Field.[1]

A double-barrel version of 0 Gundam's beam gun, it is mounted on the hardpoint of the additional forearm armor.[1] It can be equipped on either the right or left forearm.[1]

A standard armament of the 0 Gundam, it emits a beam blade made of GN Particles.[1] One beam saber is stored on the right side of 0 Gundam's back.[1]

A large, high output beam cannon mounted on the left side of 0 Gundam's back.[1] It is similar in concept to GN-005 Gundam Virtue's GN Bazooka and can shoot out a huge amount of GN Particles.[1]

Two Vulcan guns are mounted in the additional head armor, one on each side.[1] They are for anti-air defense such as intercepting missiles and the likes.[1]

Like the 0 Gundam, Full Armor 0 Gundam can release large amounts of GN Particles which, when controlled by the two clavicle antennae on the chest, form a huge angelic wing-like effect. The GN Feathers have multiple functions; it can be used in attitude control where it helps to improve the suit's mid-air stability, for jamming radar, and as a means of defense as the dense particle cloud can also disrupt enemies' attacks. The visual presence of the GN Feathers also create a powerful psychological effect on those who witnessed it. For the effects that it achieved, this experimental feature was deemed to consume too much GN particles and was not used in later Gundams.

As the Full Armor 0 Gundam was fitted with an original GN Drive, it could theoretically use the Trans-Am System to release all of its compressed high-density GN particles, enhancing its thrust and defensive capabilities as well as allowing it to perform at three times its normal output for a limited time. The existence of this system was only revealed in AD 2308, and Full Armor 0 Gundam never used the system as it was not deployed by Fereshte.

The operating system of the Gundams is linked to Veda, allowing the quantum computer to provide support to the Gundams and their pilots. As suggested by Ian Vashti, Fereshte severed their links to Veda when it is evident that Celestial Being's plans were being compromised in AD 2308, and Sherilyn Hyde replaced the Veda-linked Operating System used in Fereshte's Gundams with a copy of the Ptolemaios team's stand-alone operation system.[2] Without support from Veda, piloting the Gundams and completing missions will be tougher for the pilots.[3]

Originally, this equipment, alongside GN-000 0 Gundam, was meant to be used by Fereshte in their operations though it never was used.[1] After the battle with the United Nations Forces, this equipment and 0 Gundam were given back to the Ptolemaios team.[1] Before the final battle against the Innovators, this equipment was considered for deployment but was passed over due to the 0 Gundam lacking a GN Drive and thus unable to power it sufficiently.[1] 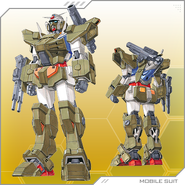 Ejecting Full Armor equipment
Add a photo to this gallery

Retrieved from "https://gundam.fandom.com/wiki/GN-000FA_Full_Armor_0_Gundam?oldid=470828"
Community content is available under CC-BY-SA unless otherwise noted.