As Celestial Being's only 4th Generation Mobile Suit,[1][2] the 00 Gundam carries over many of the previous generations' features, most notably the GN Drive and Trans-Am System. It also introduced newer innovations such as the revolutionary Twin Drive System, which utilizes two GN Drives with (un-specified) matching characteristics to generate GN Particle emissions equivalent to the squared output of a single GN Drive.[3][4]

Due to the extremely large volume of GN Particles created by Twin Drive, special, high-capacity GN Condensers were installed to help regulate the output.[3] Like Celestial Being's other mobile suits of 2312, 00 appears to utilize a direct body particle distribution system to transfer GN Particles directly via the frame instead of the GN Power Lines used by the 3rd Generation Gundams, which was adopted from the GN-X series.

The clavicle antennas that are used for particle control were miniaturized built onto the head rather than the chest.[3] This was done in order to prevent the antennas from interfering with the GN Drive's physical movements.[3] The antennas on the chest are built as a support instead.[3]

Similarly, fitting the GN Drives onto such small chassis was only made possible due to Celestial Being adapting the more advanced drive technology of machines like the GNX-603T GN-X,[3] which are more efficient and compact than the 3rd Generation Gundams' Drive chassis. The smaller Drive chassis is a new improvement of the latest generation of Gundams and allows them to be specialized for specific functions.

The positioning of 00's GN Drives was influenced by the operational data of GN-XXX Gundam Rasiel, and specifically designed to utilize advantageous functions based on their positioning.[5] When facing forwards the GN Drives' particle emissions are used to create a powerful GN Field for defense,[3][6] allowing the 00 to block and even push back beam weaponry. When positioned directly to the sides the GN Drives greatly increase the suits ability to maneuver.[6] Thus, the 00 was able to weave itself around and through the battlefield quickly and efficiently, in addition to making it much harder to predict its movements and properly target. When the GN Drives are set directly backwards they are able to devote the entirety of their emissions to thrust and acceleration.[3][6] The backpack also contributes GN Particles for thrusting power.[3]

The drive cones on the 00 are a combination in the cone design of the third generation Gundams, and the three thruster design of the Astraea.[3][4]

Stored on the rear waist armor, the pair of GN Beam Sabers can adjust their blades' length to function as either beam sabers or beam daggers.

00 can carry a GN Shield made of E-Carbon. An improved version of the GN Shield carried by Exia, it can be stored as two separate pieces either near the GN Drives or on the wings of the 0 Raiser and can also be combined to form a bigger shield.[3] When combined with the GN Field, it becomes a shield with a perfect defence.[3] The tip of the shields are sharp and can be used as a melee weapon.[3]

An improved model of Gundam Exia's main weapon. Unlike Exia's GN Sword, 00's weapon is more conventional in shape. Sword Mode sees the weapons used like conventional broadswords, with a tap connecting the weapons to 00's GN Condensers. It also possesses a Beam Saber Mode, in which the blade is in rifle mode position and emits a beam saber from both barrels to form a larger-than-average beam saber. Alternatively, the two swords can be connected pommel to pommel to become the Twin Lance Mode. When switched to Rifle Mode, the blade pivots from the hilt and rotates on its long axis, revealing a targeting sensor. The Rifle Mode can be used in either rapid fire mode, which is more than adequate to destroy most mobile suits, or be charged to deliver a single, high-powered blast for much larger targets.[7] Even though it can change its function instantly, there is still a slight time lag when 00 draws the weapon.[3] To help counter this issue, 00 is equipped with two of these weapons.[3]

The direct descendant of Exia's GN Sword in appearance. Unlike the GN Sword, or the GN Sword Kai, the GN Sword III does not have a "storage configuration". However, the switch from rifle to sword mode is much faster and smoother than before. Both modes benefit from the increased power of the Twin Drive, and the blade's green edge is derived from the same material that makes up GN Condensers. First tested on the GN Katars of the 00 Seven Sword,[4] this material enhances the power of the sword by converting large amounts of GN Particles into heat intense enough to melt most armors on contact. While having this feature, GN Sword III also has the ability to generate a beam saber, covering the whole blade of the sword. The GN Sword III has 2 modes: Rifle Mode (in which the sword is folded and a rifle extends from the front), and Sword Mode (which has the sword fully extended and with another rifle mounted above the blade). While the Raiser Sword requires both GN Sword II units present in order to be used, the GN Sword III can initiate it with just one.[8]

While it is known that 00 Gundam possesses a GN Field mechanism,[2] it is not known whether it can generate only a partial field or a full spherical one in its basic form. This is because its only been observed to create small partial ones near it's GN Drives.

Trans Am works conjunction with 00 Gundam’s Twin Drive System, allowing 00 to generate the already squared particle generation even further higher. Due to the powerful and unstable nature of the Twin Drive System, 00's overwhelming particle output in Trans Am can even overwhelm it's own frame and cause an overload[9](and de-sync the Twin Drive in the process), the worse case scenario being the self-destruction of the GN Drives. It was because of such mechanical concerns that Trans-Am was highly recommended not to be used until the system complications are corrected. Ultimately 00 Gundam's technical complications couldn't be corrected without the addition of new equipment which came in the form of energy stabilizer equipment, built onto 0 Raiser.

The 00 Gundam's history can be found on Setsuna F. Seiei's page. 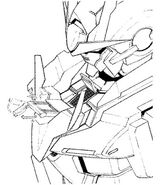 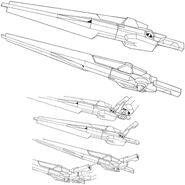 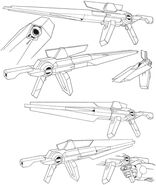 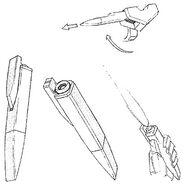 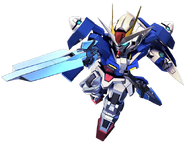 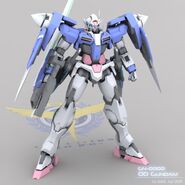 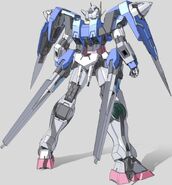 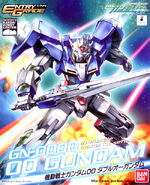 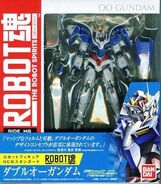