After the destruction of 00's GN Drives in 2312, Celestial Being went through a technical innovation and was able to create an identical system using only GN Particle Tanks.[1] Essentially a "Twin Condenser System",[2] it is basically using the Twin Drive System theory but using a pair of Large GN Condensers instead of GN Drives. The concept was being worked on by Sherilyn Hyde some time before the ELS Conflict[2] and appears to have been completed and equipped on the current 00 Raiser Condenser Type.[3] Its performance (especially in Trans-Am) appears to greatly surpass 00 Gundam Seven Sword/G using two Large GN Condensers in non-Twin Drive configuration during previous trials,[3] though its Trans Am time limit is still considered to be quite short as it does not possess any GN Drives.[4]

Because Celestial Being have limited access to the Orbital Elevators in 2314, their mobile suits are divided to serve either Earth or space.[5] 00 was assigned to be deployed in space.[5]

See also: Setsuna F. Seiei's History After the restoration of the 00 Gundam after the battle against the Innovades, Celestial Being conducts a series of tests to see if 00 can utilize Trans-Am now that it lacks the Twin Drive System as its power source by testing several GN Drive/GN Particle Tanks combination's. During these tests, they also tested the viability of the new GN Sword II Blaster as a weapon developed specifically for a True Innovator. They find that the refitted 00 is unable to use Trans-Am with the single Drive plus single particle tank configuration, but is able to use it for a total of 0.03 seconds with the double Particle Tank configuration. Despite the new limitations in its abilities, 00 had no problem dispatching the unexpected enemies encountered during some of the tests.

During the ELS Conflict, Setsuna had the option of using 00 Gundam with either the Seven Sword/G or the 0 Raiser equipment set.[6] He chose the latter because he wanted to emphasize communicative ability instead of combat ability.[6]

ELS 00 Raiser featured in Gundam 00A

Setsuna in 00 Raiser while under attack by ELS

00 Raiser Condenser Type's first launch as seen in the movie. 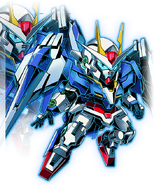 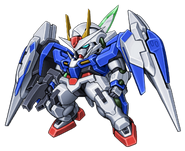 Retrieved from "https://gundam.fandom.com/wiki/GN-0000RE%2BGNR-010_00_Raiser_GN_Condenser_Type?oldid=451017"
Community content is available under CC-BY-SA unless otherwise noted.