Other than the heavy damage sustained by 00 Gundam during its battle against CB-0000G/C Reborns Gundam, both of its GN Drives were also destroyed during the battle between Gundam Exia Repair II and 0 Gundam Type A.C.D..[4] As a result of the latter, the Twin Drive System is inoperable. However, with Gundams still needed in service, Celestial Being engineers restored 00 Gundam and began experimentation with new technologies. The development team would revisit the GN-0000/7S 00 Gundam Seven Sword and remade it as 00 Gundam Seven Sword/G. While superficially identical, the unit is different in a few ways. Amongst the modifications, Celestial Being engineers replaced the destroyed drive with a large GN Condenser, and added the GN Sword II Blaster to field test. This new weapon also transforms the suit from a close combat suit to a high perfomance general purpose unit.[5] With the 0 Raiser under repairs, Celestial Being engineers upgraded the GN Buster Sword to carry the Twin Drive stabilization equipment to test if it can help in other types of power plant setup. Due to the presence of the GN Buster Sword II, the suit is still capable of utilizing the GN Field.

The tests revealed a lot of weaknesses within the system. Without the Twin Drive System, Trans-Am was impossible on a GN Drive-Large Condenser combo setup[1] and would work for only 0.03 seconds before powering down on a two Large Condenser setup.[2] In order to improve its performance, Celestial Being engineer Sherilyn Hyde worked at improving its GN Condensers.[4] These new improvements eventually led to a five percent increase in performance (tested in simulation as GN-0000GNHW/7SGD2 00 Gundam Seven Sword/G Inspection).[4]

A massive melee weapon with top class destructive power, it is attached to the solar furnace of the left shoulder, and has 3 modes, a storage mode, a shield mode and a sword mode. The storage mode is the form adopted the weapon when it is mounted on the suit. In its shield mode, a GN Field can be generated to defend against attacks from a single direction.[6] The GN Field is also large enough that it can be used to protect nearby allies.[5] This weapon is developed by Ian Vashti after he analyzed the GN Buster Sword of GN-X II that was captured by Fon Spaak.[6][7] The weapon's performance had greatly improved compared to the GN-X II's due to Celestial Being's more advanced technology.[5] During the testing of the updated Seven Sword/G, the Buster Sword II was also installed with the same stabilizer equipment that was used on the 0 Raiser to stabilise the Twin Drive System[1][5]

A pair of medium sized swords stored on the add-on parts at both knees. The cutting edges are made of the material developed from those that are used in GN condensers.[6] As the GN particles change to heat, the heat is transferred to whatever is in contact at the moment. With this feature, it is theoretically possible to attack at high temperatures that cannot be endured by the material of the GN Katar.[6] While these weapons are in the prototype stage and are very unstable, the experimental concept that it uses was eventually perfected[8] and became a standard for many powerful GN Sword designs that came after it. Actual confirmation of the GN Katars' flaws being fixed is still absent at this point, though it should be noted that Condenser blade technology has been successfully implemented without issues on other weapons by this time.

A new weapon developed for 00 after the final battle with the Innovators and was first seen being field tested with the 00. Despite being based on the GN Sword II, the weapon is specialized as a gun rather than a sword.[5] The "G", which stands for "Gun", added to the Seven Sword's model number is a direct reference to the addition of this new weapon. The blade presumably uses the same Condenser edge concept that was first experimented with on the GN Katars and was later perfected on the GN Sword III. Unlike other weapons on the Seven Sword/G, this one was adjusted specifically for Setsuna, who is an Innovator.[1] As a result, it has extremely high accuracy and can snipe a target 1000km away while in Trans Am Mode, even if the mode only lasts 0.03 seconds.[5] Depending on the suit and Setsuna's conditions, the weapon has infinite potential in terms of attack range and firepower.[5]

Mounted on the right of the waist, it has an enhanced rifle mode[6] compared to the currently adopted GN Sword II. Conversely, it also has decreased rapid fire capability and increased particle consumption.[5] It's equipped with the premise of the complete operational Twin Drive System,[6] though appears to be operable at some level even without it.[1] During 00 Gundam Seven Sword/G's first launch, its performance was directly being compared to the GN Sword II Blaster.[1]

Mounted on the left of the waist, the GN Sword II was developed as a projectile weapon to replace the GN Beam Dagger which Setsuna often used when piloting Exia. The tip part of the sword is attached to a wire, and can be shot out and retracted as many times as needed.[6]

The system was inoperable during the testing phases but the Seven Sword/G setup would have been able to harness it if it chosen instead of 00 Raiser to be deployed during the time of the ELS Conflict in 2314. This is due to the fact that Seven Sword/G also possessed the same stabilizer machine as 0 Raiser[1][5] and the 00 Gundam's Twin Drive System was already functional by this time.[9]

Usable only with the double Large GN Condenser setup, and with a time limit of 0.03 seconds.[2][5] However, this time limit is recorded during testing phase; it is unknown if this limit remains the same when the 00 Gundam's Twin Drive System become functional.

The Seven Sword weapon set eventually was used by the repaired 00 Gundam after the defeat of the Innovators, including the addition of a new weapon, the GN Sword II Blaster. The repaired 00, Gundam GN-0000GNHW/7SG 00 Gundam Seven Sword/G, is also being modified to suit Setsuna, having evolved into an Innovator. The unit made its debut of destroying a disbanded A-Laws GN-XIII in Gundam 00V Senki.

Later on, Celestial Being conducts a series of tests (also in Gundam 00V Senki), to see if 00 can utilize Trans-Am now that it lacks the Twin Drive System as its power source, by testing several GN Drive/GN Particle Tanks combinations. During which they also tested the viability of the new GN Sword II Blaster as a weapon during the trials. They find that the refitted 00 is unable to use Trans-Am with the single Drive plus single particle tank configuration, but is able to use it for a total of 0.03 seconds with the double Particle Tank configuration. Despite the new limitations in its abilities, 00 had no problem dispatching the unexpected enemies when they appeared.

During the ELS Conflict, Setsuna had the option of using 00 Gundam with either the Seven Sword/G or the 0 Raiser equipment set.[5] He chose the latter because he wanted to emphasize communicative ability instead of combat ability.[5]

Fereshte member and Celestial Being engineer, Sherilyn Hyde, conceptualized a computer stimulation variant of 00 Gundam Seven Sword/G in order to test the recent development in GN condenser technology. Sherilyn's goal was to create a condenser-based Twin Drive System.[4] The 00 Gundam Seven Sword/G Inspection is a slightly improved design of the 00 Gundam Seven Sword/G, with a performance increase of five percent.[4] The color red was chosen purely because it is liked by Sherilyn.[4] It was indicated from the data gathered that the performance of the unit was beyond the expectations, with hints that it can be improved further with further research.[4] 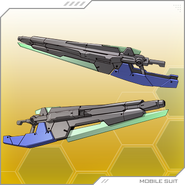 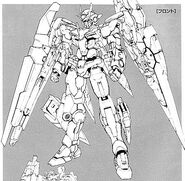 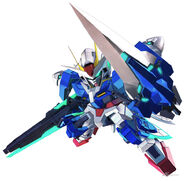 Retrieved from "https://gundam.fandom.com/wiki/GN-0000GNHW/7SG_00_Gundam_Seven_Sword/G?oldid=446082"
Community content is available under CC-BY-SA unless otherwise noted.