Riku's machine is a Gunpla based on the 00 Gundam.[1] He personalized it by mixing the best parts of the original kit with customized parts, and applied a new blue and white color scheme based on those of sports uniforms.[1][2] Antennae are added to the Gunpla's head, and its sensor functions are enhanced, but Riku made these changes simply because they looked strong.[2] He also adjusted the usability of the Gunpla's close combat specialized weapons to suit his needs, and attached verniers and wings to the bases of the cone thrusters, boosting the Gunpla's mobility unexpectedly close to that of the GN-0000+GNR-010 00 Raiser's.[1][2] Overall, the Gundam 00 Diver's performance has a surprisingly good balance of offense and defense; it also reflects Riku's great taste in Gunpla.[1][2] However, as noted by Shahryar, Riku's lack of building skills resulted in his inability to fully materialize his ideals for the Gundam 00 Diver.[3]

Stored on the rear skirt armor, the pair of GN Beam Sabers are basic close combat weapons that emit a blade-shaped beam.[2] Although less powerful than the GN Sword II, it can be wielded easily and effectively when in the right range.[2] By adjusting the output, the GN Beam Sabers can be converted into GN Beam Daggers and used as throwing weapons.[2] The two GN Beam Sabers can be held side by side to generate a longer beam blade.[4]

The main armaments of the 00 Gundam, the Gundam 00 Diver's base model.[2] A physical sword, it can change from Sword Mode to Rifle Mode for shooting, and even generate a long beam blade in Beam Saber Mode.[2] Being able to instantaneously change modes without having to change grips made the weapon extremely useful for Riku, who is new to Gunpla Battle.[2] Riku has adjusted the weapon so that he could switch between modes without the use of the blade rotation mechanism.[2] This allowed the GN Sword II to be used more intuitively.[2]

One of three weapons Riku equipped onto the Gundam 00 Diver as he looks for ways to fight well without using the Trans-Am System.[5] This large physical sword with a laser blade along its cutting edge originated from the ZGMF-X56S/β Sword Impulse Gundam, one of the Gunplas Riku had in his room.[6] Riku did not activate its laser blade when using it.[5] Stored on the left side of the backpack.[5]

A beam rifle originating from the WMS-GB5 G-Bouncer, another Gunpla owned by Riku.[6] Another weapon Riku equipped onto the Gundam 00 Diver as he looks for ways to fight well without using the Trans-Am System.[5] This ranged weaponry is stored on the rear waist armor when not in use.[5]

Same weapon as used by the RGM-79［G］ GM Sniper, it is a beam rifle with long effective range and a high-powered scope, allowing the pilot to hit distant targets with pinpoint accuracy. This is the last of three weapons Riku equipped onto the Gundam 00 Diver as he looks for ways to fight well without using the Trans-Am System.[5] It is stored on the right side of the backpack when not in use.[5]

A special system built into the pair of shoulder-mounted GN Drives, which are the engine units of the 00 Gundam, thus the Gundam 00 Diver has it as well.[7] When activated, it briefly improve the unit's specifications more than three-fold.[7] As a side-effect, the unit glows red during this time.[7] In Gunpla Battle Nexus Online, whether a Gunpla can use Trans-Am depends on how well the Gunpla is built.[7] As the Gundam 00 Diver's build quality is still lacking, it cannot use the system properly, one of its GN Drives blows out soon after activation, ending the Trans-Am prematurely and disabling the Gunpla.[7] 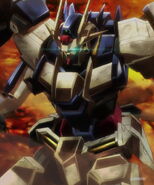 Close up in first opening 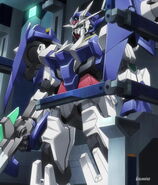 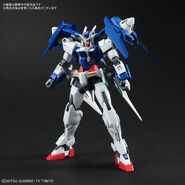 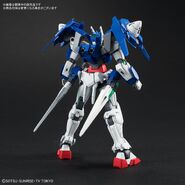 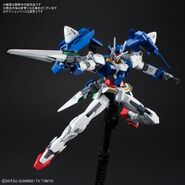