After the 00 Diver Ace was wrecked in the GPD duel with Tsukasa Shiba, Riku carried out a large-scale remodeling, and it was born again as this new Gunpla.[1][2] Based on Riku's previous experiences as he fought many powerful enemies and journeyed on countless adventures, the concept of this custom build is to add elements of Gundams from other series to the 00 Gundam, mainly the Destiny Gundam's design and capabilities.[1][2] In the end, the Gunpla gained a system that was far more powerful than expected, and its capabilities surpassed the boundaries of individual series.[2]

Mounted in the head, the pair of Vulcan Guns fire weak beams.[3][4]

A pair of Beam Sabers are stored behind the front skirt of the 00 Sky and attached to the blue armor piece.[4][5][6] Their beam blades' convergence rate are raised compared to normal ones, increasing their cutting capabilities.[7]

A newly created portable firearm.[7] Although its design is basic compared to the 00 Diver Ace's Super GN Sword II, its firepower and accuracy have been improved by limiting its capabilities.[7] Can be stored on the rear waist armor when not in use.[3] It uses the same e-pac as the Gundam Mk-II's beam rifle, and its muzzle was inspired by the ∀ Gundam's beam rifle.[3]

A large sword inspired by the Destiny Gundam's armaments, it has enough power to slice through large mobile armor.[2] Stored on the back of the right Sky Drive Unit, the Buster Sword unfolds when in use and emits a beam blade along its cutting edge.[2][5]

A large firearm with high output, it is another weapon inspired by the Destiny Gundam's armaments.[2] Stored on the back of the left Sky Drive Unit, the Long Rifle unfolds when in use and can be fired with or without its grip being held.[2][3][5] The weapons stored behind the two Sky Drive Units can be chosen to be the same depending on the mission.[2]

Gauntlet units equipped on both arms.[2] They can be used in various ways such as in shield mode, where they emit a beam shield each, and multi-claw mode, where the finger parts in the tips unfold to utilize various beams.[2][6] The Sky Bracer slides forward when in multi-claw mode.[2][6]

Shin guard units equipped on both legs.[2] They can slide downward and generate beam fields for kicking attacks, deflect enemy's physical weapon or perform a 'Diver Shoot', where the Gunpla directs enemy's beam shot back via a soccer kick.[2][5][6][8] This kick is also utilized for the 'Infinity Shot' combination special move.[3] The Sky Leg Guards can also shoot beams for offensive purpose.[4][8]

Equipment original to this Gunpla, which consisted of a GN Drive with the wing unit of the Destiny Gundam built into it.[2] The wings of light are generated by GN Particles bypassed through the wing unit and can be used as beam blades for offense or as beam shields for defense, aside from propulsion.[2][3][5]

A system unique to the 00 Sky, it combines the 00 Gundam's Trans-Am System and Destiny Gundam's Wings of Light.[5][7] The wing units of the Sky Drive Units accelerate the release rate of highly-concentrated GN Particles during Trans-Am mode, temporarily creating an explosive boost to the Gunpla's capabilities that surpass normal Trans-Am.[5][7] As with normal Trans-Am, the 00 Sky turns a reddish hue during Trans-Am Infinity.[5]

The Trans-Am Infinity demonstrates further changes when performing finishing moves which can only be used by Divers who are over Rank C.[2] By raising the circulation speed of highly concentrated GN Particles to the inside of the Gunpla to the limit, it shifts to the 'Higher Than Sky Phase' where the reddish glow effect of Trans-Am Infinity turns to a light blue coloration, with the dark blue parts of its body glowing in a lighter blue.[2][6]

00 Sky's hand-to-hand combat mode, Riku created it prior to his fight with Tigerwolf.[6] In this mode, the 00 Sky’s backpack and shoulder binders are lowered to the waist level, and the blue parts on the feet flip down.[2][6] These changes solve a weakness of the Gunpla where the shoulder binders limit the machine’s range of motions, and also lower the Gunpla's center of gravity for increased mobility.[6] Although this mode has a drop in power, it enables flexible and speedy maneuvers.[2] It excels in melee battle style that focuses on evasion and consecutive attacks.[2]

A combination special move with the PEN-01M Momokapool. The Momokapool ejects its Petitkapool, and the 00 Sky kicks it towards the enemy using the Diver Shoot after activating Trans-Am Infinity. The power of the kick combined with the propulsion power of the Petitkapool results in a powerful attack that overwhelmed even the tough armor of the Super Shock Gundam, which is five times stronger than a usual Gunpla's.[3]

Finish Moves can be acquired by earning a Diver Rank above C.[9] The Hyper Sky Zamber is the 00 Sky's first Finish Move, in which the Gunpla in "Higher Than Sky Phase" wraps the Buster Sword with the wings of light to create a massive blade of light.[6][9] Riku invented it while fighting Tigerwolf's XXXG-01S2龍虎狼 Gundam Jiyan Altron, and the move overpowered Jiyan Altron’s ‘Raijin Thunder’ finish move, causing heavy damage to the stage.[6] However, as the 00 Sky is not yet adjusted for the move, the backlash from using it causes severe damages to the Gunpla.[6] This issue was resolved later.[4]

The 00 Sky's second Finish Move, the Gunpla in "Higher Than Sky Phase" wraps the Long Rifle with the Wings of Light, transforming the weapon into a gigantic bow that can shoot an energy arrow with tremendous power and speed.[8][9]

The 00 Sky in "Higher Than Sky Phase" wraps the AGE-IIMG-SV Gundam AGEII Magnum SV ver. (in Phoenix Mode) with the Wings of Light, transforming the machine into a unique, golden five-pronged blade for slicing apart large enemy unit.[10] 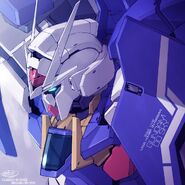 Charging ahead in second opening 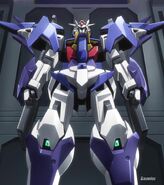 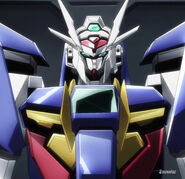 Protecting with the Wings of Light (Ep 16) 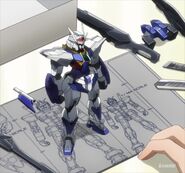 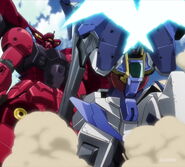 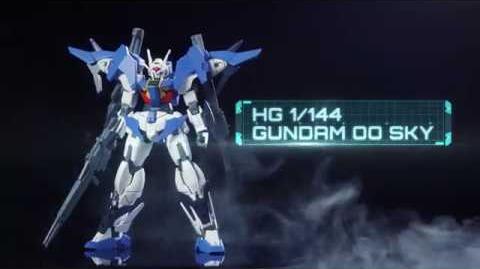 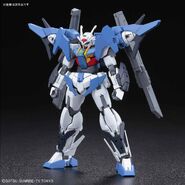 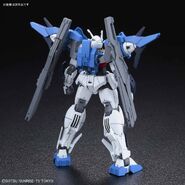 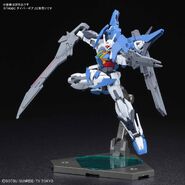 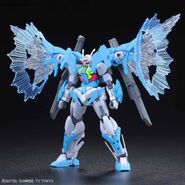 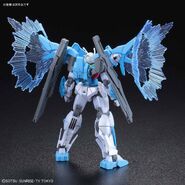 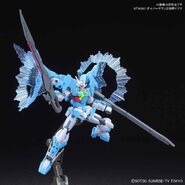