The GN-0000DVR/SM Gundam 00 Sky Moebius (ガンダムダブルオースカイメビウス, Gandamu Daburuō Sukai Mebiusu?) is a Gunpla that appears in Gundam Build Divers Re:RISE. An upgraded version of the GN-0000DVR/S Gundam 00 Sky, it is built and piloted by Riku Mikami.

The Gundam 00 Sky Moebius is a Gunpla that was custom-built based on Riku's Gundam 00 Sky. Each part was enhanced to gain high average scores in all types of mission, and it was reborn as an unit with even higher versatility and an excellent degree of perfection. New armaments have been added to the further pursue the 00 Sky's concept of incorporating additional elements of Gundams from various series and it has become an imposing presence as the ace unit of the Force Build Divers.

Standard portable firearm that adopt the e-pac system. Two rifles of the same model have been prepared for dual-wielding and they can be enhanced when attached with the Armed Wing Binders. When not in use, the Beam Rifles are stored on the rear waist armor.

Mounted on the back of the Moebius Drive Units, the pair of Armed Wing Binders are compound armament inspired by the Freedom Gundam's and Strike Freedom Gundam's armaments. They can function as Moebius Arondights (00 Sky Moebius's version of the 00 Sky's Buster Sword) and Moebius Beam Cannons (00 Sky Moebius's version of the 00 Sky's Long Rifle), and can transition to HiMAT Full Burst Mode - a firing mode that enables high mobility barrages.

Similar to the 00 Sky, the 00 Sky Moebius have shin guards called 'Sky Leg Guard' on both legs, but they differ in design. The Sky Leg Guards' capabilities are unclear, but they can slide down and seemingly generate beam fields.

An upgraded version of the 00 Sky's Sky Drive Unit. The Moebius Drive Unit can generate wings of light like the original. The wings of light can be used as beam blades for offense or as beam shields for defense aside from propulsion, and its output has been drastically improved.

A firing mode that enables high mobility barrages. In this mode, the 00 Sky Moebius fires both its Beam Rifles and both Armed Wing Binders simultaneously. Notably, the Armed Wing Binders fold around the Moebius Drive Units, enabling the firing of beams from both ends of the binders.

A unique version of the Trans-Am System, the 00 Sky Moebius inherited it from the 00 Sky. It combines the 00 Gundam's Trans-Am System and Destiny Gundam's Wings of Light. The wing units of the Moebius Drive Units accelerate the release rate of highly-concentrated GN Particles during Trans-Am mode, temporarily creating an explosive boost to the Gunpla's capabilities that surpass normal Trans-Am. As with normal Trans-Am, the 00 Sky Moebius turns a reddish hue during Trans-Am Infinity.

A mode inherited from the 00 Sky. In Lash Position, the 00 Sky Moebius’s backpack and shoulder binders are lowered to the waist level, and the ivory and blue-colored parts of the feet flip down. Due to these changes, the Gunpla's center of gravity is lowered and this lead to increased mobility. Although this mode has a drop in power, it enables flexible and speedy maneuvers. It excels in melee battle style that focuses on evasion and consecutive attacks. 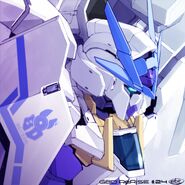 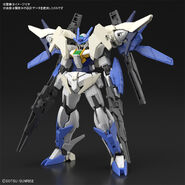 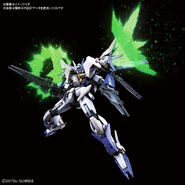 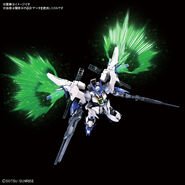