A decisive battle version of the 00 Sky with extra armament - the Heavy Weapon System, intended for fighting the second Coalition of Volunteers.[1] The 00 Sky HWS's concept was to launch a proactive attack with maximum firepower by firing all of its extra armament at the enemy, remove the emptied Heavy Weapon System, then continue the fight with the 00 Sky itself.[2] In contrast to the RGM-89BM Jegan Blast Master, a fellow Force Build Divers Gunpla which mainly uses beam attacks, the 00 Sky HWS's extra armament are all physical projectiles, enabling it to take on large numbers of opponents in Gunpla Battle.[1][2]

A pair of Vulcan Guns are mounted in the head, they fire weak beams.

A pair of Beam Sabers are stored behind the front skirt and attached to the blue armor piece.

The same portable firearm as used by the normal 00 Sky. Can be stored on the rear waist armor when not in use.

A large sword with enough power to slice through large mobile armor. Stored on the back of the right Sky Drive Unit, the Buster Sword unfolds when in use and emits a beam blade along its cutting edge.

A large firearm with high output. Stored on the back of the left Sky Drive Unit, the Long Rifle unfolds when in use and can be fired with or without its grip being held. The weapons stored behind the two Sky Drive Units can be chosen to be the same depending on the mission.

Shin guard units equipped on both legs. They can slide downward and generate beam fields for kicking attacks, deflect enemy's physical weapon or to perform a 'Diver Shoot', where the Gunpla directs enemy's beam shot back via a soccer kick. The Sky Leg Guards can also shoot beams for offensive purpose.

One of the added Heavy Weapon System's three armaments, a pair are mounted on the back and rise above the shoulders. The two large lance-shaped missiles have delay fuse. They can penetrate their targets and create an explosion deep within them to cause massive damage. They can alternatively fire and spread small projectiles after being launched to deal with multiple targets.[2]

Another of the added Heavy Weapon System's armaments, a large missile pod is connected to the barrel of each Lancer Missile. Each pod contains three missiles, each with enough explosive power to easily affect multiple targets.[2]

The last of the added Heavy Weapon System's armaments, the Multi Missile Launchers are mid-sized missile launchers attached to the Sky Bracers on the arms and the Sky Leg Guards on the legs. All three armaments of the Heavy Weapon System are designed so they can also be used and equipped by other Gunplas beside the 00 Sky.[2]

Equipment original to the 00 Sky, which consisted of a GN Drive with the wing unit of the Destiny Gundam built into it. The wings of light are generated by GN Particles bypassed through the wing unit and can be used as beam blades for offense or as beam shields for defense, aside from propulsion.

A system unique to the 00 Sky, it combines the 00 Gundam's Trans-Am System and Destiny Gundam's Wings of Light. The wing units of the Sky Drive Units accelerate the release rate of highly-concentrated GN Particles during Trans-Am mode, temporarily creating an explosive boost to the Gunpla's capabilities that surpass normal Trans-Am. As with normal Trans-Am, the 00 Sky turns a reddish hue during Trans-Am Infinity. 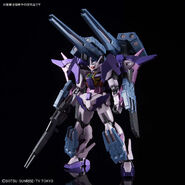 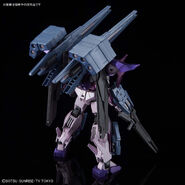 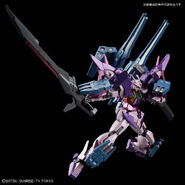 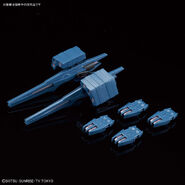