The GN-0000DVR/A Gundam 00 Diver Ace (ガンダムダブルオーダイバーエース, Gandamu Daburuō Daibā Ēsu?) is a Gunpla appearing in Gundam Build Divers. An upgraded version of the Gundam 00 Diver, it is built and piloted by Riku Mikami.

Using feedback from his experiences in GBN, Riku further customized his GN-0000DVR Gundam 00 Diver into this Gunpla.[1] Its mobility is improved by a new backpack called the "Diver Ace Unit" that is created with advice from Force member Koichi Nanase, and its energy efficiency is greatly increased by the large "GN Diver Swords" that Riku devised, which incorporate GN Condenser functions.[1][2] Other armaments and the structure of the Gundam 00 Diver Ace have also been refurbished to deal with even stronger foes.[1] An example of structural enhancement is the new knee armor, which not only strengthened the legs’ structure, but also helps to improve the overall weight balance.[1] Taking a step forward as a Diver, Riku uses this new Gunpla as the "ace" of the Force Build Divers.[1][2]

Stored on the rear skirt armor, the pair of GN Beam Sabers are basic close combat weapons that emit a blade-shaped beam.[1] Although it is less powerful than the Super GN Sword II, it can be wielded easily and effectively when in the right range.[1] By adjusting the output, the GN Beam Sabers can be converted into GN Beam Daggers and used as throwing weapons. [1]

A newly created large sword, the built-in GN Condenser functions allows the weapon to store energy from the machine and release it at the moment of impact during attacks.[1] This design feature also improve the Gunpla’s energy efficiency.[2] A pair of GN Diver Swords are stored on the 00 Diver Ace's GN Drives when not in use.

An upgraded version of the 00 Diver's GN Sword II, it has higher offensive capabilities while retaining the original’s multi-mode functions.[1] Its white tip can be shot out on a line to hit or grapple the enemy and then retracts.[3][4] A pair of Super GN Sword II are stored on the side armor when not in use.[3]

A new backpack to greatly improve the 00 Diver's mobility.[5] It was created by researching Gundam backpacks with wings from various series, and made using a Seed-series backpack as the base as suggested by Koichi Nanase.[3][5] Its parts were then manufactured via the injection molding machine at The Gundam Base's factory zone, and assembled by Riku.[3] The fins unfold when flying and during acceleration, functioning as variable GN Thrusters which generate overwhelming thrust.[5]

A system carried over from the original 00 Diver, it improves the Gunpla's specifications more than three-fold when activated, and as a side-effect, the unit glows red during this time. However, once the system reach its activation time limit, the Gunpla's mobility drops greatly until the stored particles are recharged. As the build of Riku's Gunpla has improved, Koichi Nanase determined that it was possible for the 00 Diver Ace to use the Twin Drive System along with Trans-Am. Originally, Riku refused to use it no matter the situation, as he wants to become strong enough to win without using the system.[4] However, he will still use Trans-Am in dire situations, such as when the GBN world was about to be destroyed.[6] In GBN, high-level players often use terrain and circumstances to their advantage to nullify the system.[4]

During the battle with the Mass-Divers' mastermind, Sarah reacts to the desires of Coalition of Volunteers to protect the GBN world and unconsciously unleashes her full power, causing a huge pair of dynamic green energy wings to burst through the covers of the 00 Diver Ace's GN Drives while the Gunpla is in Trans-Am.[6][7] These wings of light have the unique ability to shut down the Break Decal, nullifying its effects and reversing the various bugs caused by the illegal part.[6] According to Tsukasa Shiba, these abilities are borne out of interfering with GBN's Main Program, and comparable to Break Decal's hacking ability.[8] The wings can also block beam shots, and allow the 00 Diver Ace to execute a deadly charging attack.[6] Shahryar later notes that the destruction of the GN Drives' covers indicated that the Gunpla was unable to handle these wings.[9] Unknown to the Divers then, the Trans-Am Wings also spread Sarah factors all across GBN.[7] Thus, the strain on the system that accompanies Sarah's growth started to affect GBN in its entirety, resulting in bugs that have the potential to surpass the threat of the Break Decal.[7] 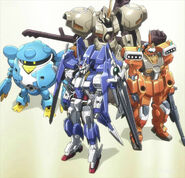 With the rest of the Build Divers (Ep 07)

With the other Build Divers' Gunpla (Ep 07) 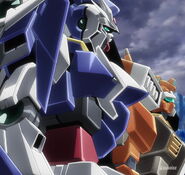 Draping the Big Zam with the Trans-Am wings (Ep 12) 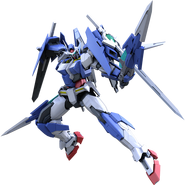 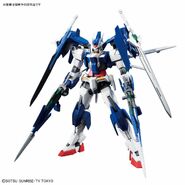 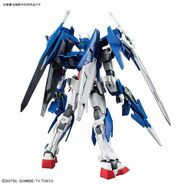 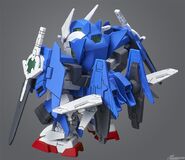