With Celestial Being (CB) rebuilding their organization after their defeat in A.D. 2308, they began development of the 3.5 and 4th generation Gundams. The lone 4th generation Gundam, the GN-0000 00 Gundam, had undergone continuous beta testing of its experimental Twin Drive System by members of CB's engineering team and Tieria Erde. The original 00 Gundam was made as a close combat mobile suit, normally equipped with its GN Sword II. However, CB soon realized that the 00's basic arms would not be enough to counter the rapidly advancing mobile suits developed by the Earth Sphere Federation. Taking inspiration from the GN-001 Gundam Exia's diverse Seven Sword System, CB engineers created the Seven Sword package for the 00 Gundam, improving the units effectiveness in close combat while also attempting to stabilize the Twin Drive System.

The original Seven Sword System was designed specifically for the Gundam Exia. Armed with one GN Sword, two GN Blades, two GN Beam Sabers and two GN Beam Daggers, the package was meant bring out the full close combat fighting strength of the Exia. Coupled with the close combat fighting style of its Gundam Meister Setsuna F. Seiei, Exia served its role as the close combat Gundam prior to is disappearance after A.D. 2308. Seeking to do the same with the 00 Gundam, CB engineers incorporated a mix of technologies into the 00 Gundam's Seven Sword armament. Befitting its name, the 00 Gundam Seven Sword was armed with 7 close combat weapons; the experimental GN Katars, the standardized GN Beam Sabers, the long and short GN Sword IIs, and the large GN Buster Sword.

The 00's GN Beam Sabers were significantly improved from the Exia's. Originally, Exia had a set of four beam blades, a pair of daggers and a pair of normal beam sabers. While they were helpful in a few situations, the sabers' lengths were non-adjustable for differing combat situations. With that in mind, CB engineers created the beam sabers to be adjustable in length, increasing their overall efficiency in combat.

The GN Katars are mounted on the sides of the 00 Seven Sword's kneecaps, which must be exchanged with the standard white kneecaps to properly holster the weapons. The design is taken from the famous Indian weapon, as well as the 00's GN Shields. The GN Katars are meant as push daggers for stabbing into an enemy. To enhance their capabilities, CB engineers equipped the katars with GN Particle infused blade edges, consisting of the material used in GN Condensers. While attacking, the particles surrounding the katar are converted to heat, and the heat is transferred to the object the katar comes into contact with. However, the heat generated by the particles can be too much for the katars themselves to tolerate. The experimental weapons inspired a line of other condenser infused weaponry for the next generation of Gundams.

Taking a design cue from the Exia's GN Blades, CB engineers created the GN Sword II Long and GN Sword II Short. While both swords are physical exaggerations of the aforementioned blades, they vastly differ in function. The GN Sword II is more of a traditional broadsword, able to switch between rifle and sword mode faster than the original Exia could. The long GN Sword II focuses on ranged combat, the only such weapon in the 00 Seven Sword arsenal to do so. The drawbacks are that the long sword uses more particles and a decreased rapid fire capability. In contrast, the GN Sword II short was developed analogous to the GN Short Blade from the Exia. The shortest sword in the Seven Sword armament, the Short Sword's blade tip is attached to a wire, which can be shot out towards an enemy and retracted quickly. Despite these armaments, the signature weapon of the Seven Sword arsenal is the GN Buster Sword.

At nearly the same height as the 00 Gundam, the GN Buster Sword is a massive weapon which serves multiple purposes. CB engineer Ian Vashti analyzed the Buster Sword of a GNX-607T/AC GN-XII Sword captured by Fon Spaak in the sword's development. Normally stored on the left GN Drive mount, the GN Buster Sword can expand its frame to particle vents to create a massive GN Field. The scope of the field is so large that it can protect allied suits. When the sword is actively wielded, it is a top class melee weapon. Though the array of weapons were tailored to suit the fighting style of Setsuna F. Seiei, the Meister as well as his Gundam, had been missing during the Seven Swords' development. On top of that, the pack did not stabilize the highly unstable Twin Drive System, and a separate support unit, the GNR-010 0 Raiser, was given a higher priority than the Seven Swords. However, CB hadn't forgotten about the Seven Swords configuration.

After the battle with the Innovators, the 00 Gundam had taken some damage, but the greater concern was the fact that its GN Drives were critically damaged in the duel between the GN-000 0 Gundam and the GN-001REII Gundam Exia Repair II. With the 5th generation Gundams in construction, CB developed a modified version of the 00 Gundam Seven Sword, the GN-0000GNHW/7SG 00 Gundam Seven Sword/G as a test-bed for future weapons and systems.

A massive melee weapon with top class destructive power, it is attached to the solar furnace of the left shoulder and has 3 modes, a storage mode, a shield mode and a sword mode. The storage mode is the form adopted the weapon when it is mounted on the suit. In its shield mode, a GN Field can be generated to defend against attacks from a single direction.[4] The GN Field is also large enough that it can be used to protect nearby allies. This weapon is developed by Ian Vashti after he analyzed the GN Buster Sword of a GN-X II that was stolen by Fon Spaak.[4] The weapon's performance had greatly improved compared to the GN-X II's due to Celestial Being's more advanced technology.

A pair of medium sized swords stored on the add-on parts at both knees. The cutting edges are made of the material developed from those that are used in GN condensers.[4] As the GN particles change to heat, the heat is transferred to whatever is in contact at the moment. With this feature, it is theoretically possible to attack at high temperatures that cannot be endured by the material of the GN Katar.[4] While these weapons are in the prototype stage and are very unstable, the experimental concept that it uses was eventually perfected[5] and became a standard for many powerful GN Sword designs that came after it.

Mounted on the right of the waist, it has an enhanced rifle mode[4] compared to the currently adopted GN Sword II. Conversely, it also has decreased rapid fire capability and increased particle consumption. It's equipped with the premise of the complete operational Twin Drive System,[4] and also is the only weapon of the Seven Swords designed for long range battle.[4]

Mounted on the left of the waist, the GN Sword II was developed as a projectile weapon to replace the GN Beam Dagger which Setsuna often used when piloting Exia. The tip part of the sword is attached to a wire, and can be shot out and retracted as many times as needed.[4]

Before the Twin Drive system was deemed fully functional, this was the close range use equipment for 00 Gundam, designed specially for its meister, Setsuna F. Seiei.[4] This set of equipment was designed by the revived Celestial Being, before they had met up with Setsuna. It was developed in the factory at Lagrange 3. To test the 00 Gundam Seven Sword Wang Liu Mei's invites Amy Zimbalist to battle it by using a simulator, Amy fights GN-0000/7S 00 Gundam Seven Sword in his Advance GN-X. And then he was defeated. After several months from here, the news about CB's revival will pour. The data by Amy was used as part of 00's development data. But after that, in order for the Twin Drive to fully function effectively, the support machine GNR-010 0 Raiser became of a higher priority. For that reason and also because the sets are incompatible with each other;[4] this equipment was not used in real battle until much later.

The Seven Sword weapon set eventually was used by the repaired 00 Gundam after the defeat of the Innovators, including the addition of a new weapon, the GN Sword II Blaster. The repaired 00, Gundam GN-0000GNHW/7SG 00 Gundam Seven Sword/G, is also being modified to suit Setsuna, having evolved into an Innovator.[1] 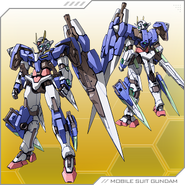 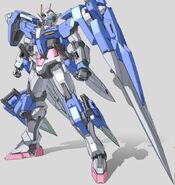 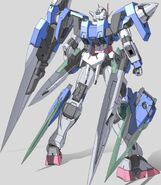 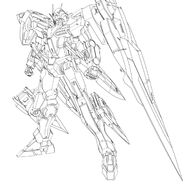 Retrieved from "https://gundam.fandom.com/wiki/GN-0000/7S_00_Gundam_Seven_Sword?oldid=490996"
Community content is available under CC-BY-SA unless otherwise noted.