Despite its power, the GN-0000 00 Gundam is a highly experimental unit that suffers from power instability issues and so requires constant maintenance and fine-tuning. The Twin Drive System was also a very new technology, requiring the external stabilizing equipment on 00's main support unit, the GNR-010 0 Raiser, to safely execute Trans-Am and fully synchronize the GN Drives. Some data from GN-XXX+GNR-000 Sefer Rasiel was also exploited in its development.[1]

When combining is needed, laser guidance sensors would mutually lock onto each other, with a Haro auto-configuring the docking sequence. 0 Raiser's binders detach from the 0 Raiser body and latch onto 00's GN Drives, and its main body combines with the 00 Gundam's backpack, resulting in an angelic-like form. After successful docking, 00 Gundam's system screen(s) reflect the changes to the frame and the Twin Drive's stabilization. Each of 0 Raiser's binders can be mounted with a GN Shield to increase it's defensive capabilities, this form can remain the same even when docked onto 00 Gundam's GN Drive housing units. Without the GN Shields attached, the binders also act as shields themselves, capable of blocking beam shots from GNZ-003 Gadessa's GN Mega Launcher in Trans-Am mode.

As the 00 Raiser the Twin Drive reaches 100% synchronization rate, it can achieve GN Particle generation rates far exceeding 300% during Trans-Am[2](700% during the first dock), and also gains the usage of the Raiser System. These feats allow 00 Raiser to fully harness its massive particle production (too much for the 00's frame to properly handle alone) and perform at peak capacity. While in Trans-Am, 00 Raiser has also been seen utilizing quantum teleportation in a few battles although the specific activation and control mechanism has not been elaborated upon.

The Raiser System allows the 00 Raiser to execute powerful attacks such as a massive GN Beam Saber dubbed the "Raiser Sword", allowing for greater close combat abilities, and using Trans-Am mode with even greater power and duration. Originally requiring both of its GN Swords working with the 0 Raiser's binders to produce and control the Raiser Sword, the 00 was later equipped with a GN Sword III. This weapon was capable of harnessing the power of the Raiser System to generate a refined, more controllable version of the Raiser Sword.

The power of 00 Raiser is further enhanced with the presence of an Innovator pilot. Once such a being is detected the Twin Drive can execute Trans-Am Burst, a massive flood of purified GN Particles across a massive area. With the Twin Drive's full abilities in constant demand to combat the A-Laws and Innovators, 00 Raiser became the mainstay unit to effectively combat opposing MS. Overall, 00 Raiser is a mobile suit that exceeds the performance of all others, surpassing the very concept of "Gundam".[3][4]

An improved model of Gundam Exia's main weapon. Unlike Exia's GN Sword, 00 Raiser's weapon is more conventional in shape. Sword Mode sees the weapons used like conventional broadswords, with a tap connecting the weapons to 00 Raiser's GN Condenser Network. It also possesses a Beam Saber Mode, in which the blade is in rifle mode position and emits a beam saber from both barrels to form a larger-than-average beam saber with the ability to cut through large size asteroids with much ease. Alternatively, the two swords can be connected pommel to pommel to become the Twin Lance Mode. When switched to Rifle Mode, the blade pivots from the hilt and rotates on its long axis, revealing a targeting sensor. The Rifle Mode can be used in either rapid fire mode to destroy enemies' mobile suits in a single shot, or be charged to deliver a single, high-powered blast(moon crescent shape) for much larger targets, capable of destroying a Baikal-class battlecruiser with a single such shot.[5] It is also capable of performing Spray-and-Pray tactics by shooting beams in a wider and streamer fashion.

The direct descendant of Exia's GN Sword in appearance. Unlike the GN Sword, or the GN Sword Kai, the GN Sword III does not have a "storage configuration". However, the switch from rifle to sword mode is much faster and smoother than before. Both modes benefit from the increased power of the Twin Drive, and the blade's green edge is derived from the same material that makes up GN Condensers. First tested on the GN Katars of the 00 Seven Sword, this material enhances the power of the sword by converting large amounts of GN Particles into heat intense enough to melt most armors on contact. While having this feature, GN Sword III also has the ability to generate a beam saber, covering the whole blade of the sword. The GN Sword III's Raiser Sword was first seen when used to destroy all 3 Baikal-class battlecruisers at once. The GN Sword III has 2 modes: Rifle Mode (in which the sword is folded and a rifle extends from the front), a single uncharged shot is more than enough to destroy a Baikal-class battlecruiser, and Sword Mode (which has the sword fully extended and with another rifle mounted above the blade). While Raiser Sword requires both GN Sword II units present in order to be used, the GN Sword III can initiate it with just one.[6]

A set of beam weapons mounted on 0 Raiser's Binders. Its firing rate is higher than a beam rifle, but weaker. It is the same type of weapon as the GN Beam Submachine Gun and the GN Submachine Gun used by Kyrios and Arios respectively. When docked with 00 Gundam, the large amount of GN Particles provided by the Twin Drive System enable the GN Beam Machine Gun to fire a beam with much higher output.

Stored on the rear waist armor, the pair of GN Beam Sabers can adjust their blades' length to function as either beam sabers or beam daggers.

A version of the GN Missile but shrunk to fit inside the 0-Raiser's main body, however it can still by used in the 00 Raiser configuration.

00 Raiser can carry a GN Shield made of E-Carbon. An improved version of the GN Shield carried by Exia, it can be stored as two separate pieces either near the GN Drives or on the wings of the 0 Raiser.

Same weapon as used by Exia. Mounted between 0-Raiser's main body and the wings, used to shoot down missiles, range is long but power is weak. When used against an solar furnace equipped suit, it's mainly for distracting. After combined with 00, the attack direction is fixed downward.

GN-0000 00 Gundam was considered by Celestial Being as a mobile suit that would surpass all mobile suits. Using its Twin Drive System, the team hoped for it to excel in battle and be the ace card against the growing threat of A-Laws. However, due to 00's poor performance during its operation, and the fact that it overloads during Trans Am, Ian Vashti was forced to make some adjustments to unlock 00 Gundam's Twin Drive potential.

Upon the Celestial Being's arriving at the base in Lagrange 3, Ian unveiled the GNR-010 0 Raiser, a support craft that can help 00 Gundam to fully utilize its Twin Drive abilities. During the trial of the 00 Raiser, it achieved an unbelievable feat - unleashing more than 290% particle output compared to the development team's theoretical expectations. Setsuna F. Seiei was awed by this performance, and it solidified his view that 00 can change the world. Notable side effect of the Twin Drive's output during the test run was its ability to disrupt and affect quantum brainwaves, affecting Tieria Erde, Soma Peries and Allelujah Haptism.

00 Raiser debuted in battle during the A-Laws' attack on the Lagrange 3's base. Together with Saji Crossroad piloting 0 Raiser, Setsuna successfully docked 00 Gundam to form the 00 Raiser. The new unit was able to overwhelm the opposing GN-XIIIs, Aheads and the Innovators' mobile suits. During its first combat operation, it demonstrated the ability to quantized and the ability to connect pilot's thoughts to other people. 00 Raiser's performance shocked the Innovators so much that Ribbons Almark wanted the unit for himself.

00 Raiser played an important role in most of Celestial Being's subsequent operations, including during the Operation to destroy Momento Mori and the Africa Tower incident. With its high maneuverability, long range and high firepower, as well as its destructive close combat capabilities, the 00 Raiser proved to be a great ally and fearsome enemy. In the final battle against the Innovators, its Trans-Am Burst helped to make way for the events that lead to Celestial Being's victory and the capture of Veda.

At the end of the campaign, the damaaged 00 Raiser was recovered, but both of its GN Drives were lost during the battle.[7] To keep 00 Gundam operational, Celestial Being began developing their GN Condenser's ability to match that of a GN Drive's; a development that could revive 00's Twin Drive System.[7] The results of the development lead to the revival of 00 Raiser, in the form of GN-0000RE+GNR-010 00 Raiser GN Condenser Type. 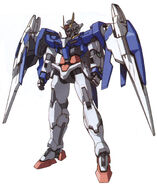 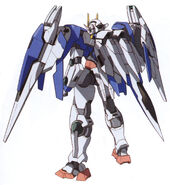 Face close up in Trans-Am Mode

In battle (From Gundam Perfect File)

With Setsuna and Ian (From Gundam Perfect File) 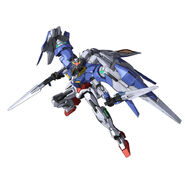 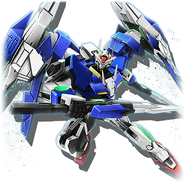 As seen in SD Gundam G Generation Over World 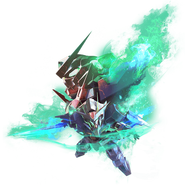 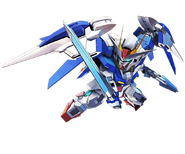 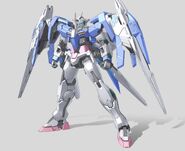 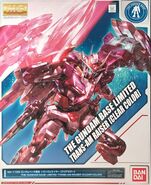 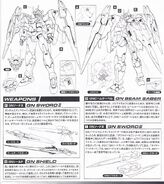