The GM Camouf is a prototype infiltration mobile suit and was featured in the manga Mobile Suit Gundam MS IGLOO 603. It was designed for false flag operations.

In appearance, the GM Camouf resembles an RGM-79 GM, although numerous sections of its body, such as the hip section and legs, originated from various mobile suits. The GM-like visor hides a monoeye sensor and the head still retains the energy piping unique to Zeonic mobile suits.

The Federation's GM has a much slimmer profile than the Zaku. Thus, the GM Camouf's disguise was achieved by attaching armor painted in Federation colors to the frame of a Zeon mobile suit. An unexpected result of using such armor to mimic the GM's slim profile was that it lightened the load on the suit's frame, making the GM Camouf a very agile machine. However, its defensive capability in turn was much worse than most Federation suits. Keeping the steel armor thin enough to mimic the GM's profile indeed resulted in a decrease in weight, but also decreased the armor's protective capability.

The standard armament of the GM Camouf was a 135mm anti-ship rifle, as the Federation still largely employed the use of warships at the time of the Camouf's development. It also sported a GM-like shield, mounted on a Zaku knuckle-shield, as well as the Zaku's heat hawk as its primary melee weapon. The "beam saber" of the Camouf is merely cosmetic (a metal rod used to imitate the GM's saber), as its reactor would not allow the use of beam weapons. The Camouf could also utilize a 120mm machine gun, which could be mounted in its shield to further its offensive capabilities.

GM Camouf's machine gun was based on Zeonic's 120mm Machine Gun which could be switched between single and automatic firing mode. It is a shell firing gun that does not require energy to be used, however, its effectiveness against heavy armor is very limited. For better disguise as Federation's weaponry, its original 100-round drum magazine was replaced by a smaller capacity box-type magazine with conforms with the gun body, and the Zaku machine gun's foldable hand grip was omitted.

Developed in the early phase of One Year War, this long-barreled rifle was used by various models of Zeon mobile suits for long-range sniping attack against Federation's warships. It fires highly accurate solid rounds which can heavily damage E.F.F.'s Salamis-class cruiser. In the firing position, the anti-ship rifle must be held by both MS manipulators to reduce its massive recoils.

The appearance of the GM Camouf's bazooka resembles the Federation's Hyper Bazooka, but is in fact a disguised Zaku Bazooka, with a dummy rectangular magazine attached to the rear exhaust tube array, and a fake green optical sensor attached to the top of its barrel. The 280mm Bazooka was another standard firearm for Zaku-type mobile suits. It fired explosive rounds that were quite effective against the armor of Federation mobile suits and battleships. The bazooka could be stored on the back of GM Camouf.

A special weapon used by spec ops/black ops MS such as MS-18E Kämpfer and GM Camouf, the chain mine was an array of disc-shaped mines connected to each other by a flexible cable. Each mine had magnetic claws on its underside, allowing it to be attached to objects. The chain mine could be thrown out like grenades one by one, laid on the ground or fixed to a building as a mine, or attached to an enemy unit and detonated. The chain mine can be carried by GM Camouf via special latches on the MS' waist armor.

Special anti-ship grenades stored inside a hexagonal prism to form a compact bundle (10 grenades) to be hand-carried by GM Camouf. A unit will be released from a prism container and hand-thrown by the MS to inflict damage against Federation's warship.

GM Camouf is equipped with a shield which crudely resembles Federation's FADEGEL RGM-M-Sh-003 Shield. In fact, it is a composite of a Zeon MS' Knuckle Shield topped with a thick sheet of red armor with two yellow stripes to imitate E.F.F.'s Cross sign.

Even before the GM Camouf (Camouf being an abbreviation of "camouflage") was produced, Zeon had used captured GMs known as the Gefangener GM for false flag tactics and operations. As a result, Zeon's produced imitations of the GM bear the name Camouf. In any case, both the Gefangener GM and GM Camouf were not issued a model numbers due to the criminal nature of false flag tactics. To that end, Zeon denied the use of either mobile suit during the One Year War.

When used in an area with high minovsky particle interference, the Federation MS targeting computers would "fill in the blanks" and IFF-tag the Camouf as a friendly unit. However, as a mobile suit employed for false flag tactics, the pilot not only had to watch out for friendly fire, but also had to be concerned with being discovered by the enemy. Camouf pilots learned these two points the hard way during its only deployment, where the entire squadron was destroyed by its own Musai transport. Ultimately, it was given a poor evaluation, and was assigned to the Earth Volunteer Corps (Earthnoids or Federation Colonists that defected to Zeon). 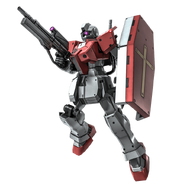