The GGV-000 Barbatos is one of the variants and the successor to GGF-001 Phoenix Gundam. The Barbatos made its first appearance in SD Gundam G Generation World.

The Barbatos is the most powerful successor of the Phoenix Gundam, being based on the Peafowl rather than a Phoenix. The interesting factor about this mobile suit is that despite it lacking the Black Box Replication, it has higher specs and power than the GGH-001 Halphas Gundam and even destroyed it in combat. The unit's design reduces drag while in Peacock Mode and also intimidates its opponents with its feather-like wings.

The unit's standard armament consists of a standard beam saber and its most powerful long ranged weaponry: the Feather Mega Beam Cannons. These powerful beam weapons has a variable output. The unit is capable of transforming to its Peacock Mode, allowing it to execute more devastating attacks as well as gaining flight. It also has an enhanced version of the Nano-Skin System called Hyper Nano-Skin System, which allows the unit to do quick repairs faster than the Phoenix. Despite having a Gundam-like Design, the Barbatos is not considered a Gundam at all.

The Barbatos is equipped with an beam saber, mainly used for throwing as part of its powerful attack.

The unit is armed with twelve Feather Mega Beam Cannon on it's shoulders which unfolds and fires with a high power output. It also serves as boosters when the unit is in flight and as part of its powerful attack.

An enhanced version of the Phoenix Gundam's Nano-Skin System, which allows the mobile suit to have quick repair faster than its predecessor. 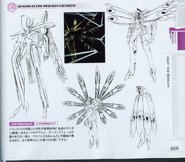