The Phoenix Zero greatly resembles that of Phoenix Gundam but it has a blue paint scheme instead of the normal red, lacking the V-fin antenna, and has a visor covering it's eyes (similar to a GM). Not only is the Phoenix Zero much weaker than the GGF-001 Phoenix Gundam, it also lacks many of it's key features such as the transformation mechanism, Burning Fire Attack, Feather Funnels, and the regenerative nano-skin.

The Phoenix Zero is equipped with two beam sabers for close combat.

The unit is armed with 4 beam cannons on its wing binders with a high power output.

Uniquely, the Phoenix Zero as a pair of Vulcan Guns that can shoot down missiles or enemy aircraft.

Phoenix Zero has two Beam Rifles equipped with a variable output. They can also combine together to become a powerful beam launcher.

These Missile Launcher are stored in the wing binders of the Phoenix Zero.

The Phoenix Zero is supposed to be a prototype of the GGF-001 Phoenix Gundam, but it became a failed replica built with inferior technology. Because of the flaws, the developers pushed the development further and used the frame of the Phoenix Zero to create the GGF-000 Master Phoenix. 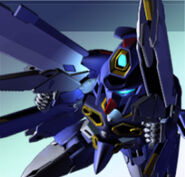 Retrieved from "https://gundam.fandom.com/wiki/GGS-000_Phoenix_Zero?oldid=428124"
Community content is available under CC-BY-SA unless otherwise noted.