The GGH-001 Halphas Gundam is a mobile suit that is the variant to the GGF-001 Phoenix Gundam, it makes its initial appearance in SD Gundam G Generation World for the PSP and Wii.

Despite being the successor of the Phoenix Gundam, the Halphas Gundam is considered to be inferior to it in specs due to its lack of Nano-Skin Capabilities and the Black Box Replication system. But the mobile suit itself is considered a step up to its predecessor by incorporating a set of cross-like wing binders which serves as both boosters and it's main long ranged weapons system.

The Halphas Gundam's wings are actually four powerful mega beam cannons. It is also armed with a beam rifle as well. Other weapons include vulcan guns, beam sabers and a couple of funnels stored on its wing binders. Finally, Halphas Gundam can transform into "bird mode" and perform a special attack called Burning Flare by covering itself with super heated energy released from the binders it then rams through several targets with high speed. While Halphas Gundam can only transform when performing the Burning Flare, it is flight capable even in its MS mode.

The Halphas Gundam is equipped with two beam sabers for close combat, stored in the side of the lower legs when not in use.

The unit is armed with 4 beam cannons on its wing binders with a high power output. It also serves as boosters when the unit is in flight.

Uniquely, the Halphas Gundam as a pair of Vulcan Guns that can shoot down missiles or enemy aircraft.

Halphas Gundam has two Beam Rifles equipped with a variable output. They can also combine together to become a powerful beam launcher.

In SD Gundam G Generation Wars, the Halphas Gundam is created through the data obtained from the Phoenix Gundam for Aplodia's use and was considered the most powerful Gundam ever made. However, the unit loses to its predecessor and the GGV-000 Barbatos due to its specs and lack of Nano-Skin Capabilities. 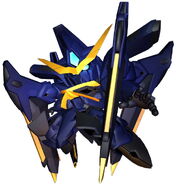 SD Rendition of the Halphas Gundam 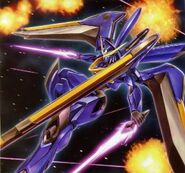 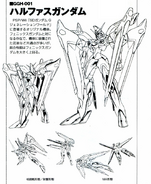