The GGH-001C Halphas Böse is one of variants of the GGH-001 Halphas Gundam and made its appearances in SD Gundam G Generation Over World. The unit is piloted by Code Amelias.

A customized variant of the GGH-001 Halphas Gundam, the Halphas Böse is a complete step up to the former unit, incorporating newer mobile suit technologies from all eras.

The Halphas Böse is equipped with two large beam scythes for close combat, stored on it's back when not in use, and can be drawn underarm or released overhead to be snatched out of the air by the mobile suit before unfolding.

The unit is armed with four cross mega beam cannons on it's wing binders with high power output. They also serves as boosters when the unit is in flight. When the Halberd attachment is equipped, the four binders are used to focus large amounts of energy, resulting in a much larger, more powerful blast.

Unlike Halphas Gundam, the Halphas Böse omits the Feather Funnels in favor of the "Feather Squeeze", at the preference of the pilot, Aplodia. The "Feather Squeeze" consists of twenty-four cabled beam-saber-tipped remotes, similar to the wired "Squeeze Weapon" deployed by the G-M1F Bandit. Six of are stored on each wing, and they are used for close-combat grappling.

Like the Phoenix Gundam and the Halphas Gundam, the Halphas Böse is equipped with two beam sabers for close combat, stored the forearms when not in use. It also uses the beam sabers as beam daggers.

The Halberd attachment for Halphas Bose functions similarly to the METEOR units deployed in the Cosmic Era, adding eight Homing Beam Cannons and two multi-missile silos to the Mobile Suit's armament. It also includes the "Super Energy Tank" setup, attached to the suit's feet, that allow it to recharge energy extremely quickly, possibly to allow the suit to keep up with the additional drain of the Halberd's beam cannons. Finally, the Halberd allows the Halphas Bose considerable additional thrust, allowing it to finally chase down and destroy the Balbadero.

Like Halphas Gundam, the Halphas Böse was able to use the "Burning Flare".

The "Flare Burst Mode" is only used with Halphas Böse Halberd attachment, and greatly resembles the "Multi Lock" blast of the METEOR-Equipped Freedom Gundam, firing the Halberd's extra beam cannons and missiles at multiple targets.

The Halphas Böse could dock with the special flight pack called "Halberd" and was called GGH-001C+H. M. E. Halphas Böse Halberd after docking. With Halphas Böse Halberd, the unit's overall offensive and defensive capability was dramatically increased along with speed as well as receiving additional armaments.

The Halphas Böse first appears after the events of G Generation World with its pilot Code Amelias, who is now corrupted and wanting to take over the Gundam Universe alongside Barbatos Neuro. Code Phoenix is aware of this and pursues her in order to restore the balance. 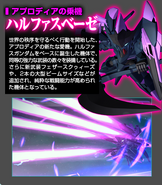 Retrieved from "https://gundam.fandom.com/wiki/GGH-001C_Halphas_B%C3%B6se?oldid=428132"
Community content is available under CC-BY-SA unless otherwise noted.