It is unknown when the Phoenix Gundam was developed, and for what purpose. It is equipped with a wide variety of weapons, including a pair of beam sabers and beam rifles, four mega particle cannons located in the wings, and a set of remote controlled "Feather Funnels". It can also transform into a bird-like Mobile Armor mode.

Its name came from its "Burning Fire" attack, which involves it transforming into its MA form and enveloping its entire body in energy, similar to the legendary phoenix, before ramming into its opponent.

Uniquely, the Phoenix is equipped with Nanoskin Armor, allowing it to repair itself to an extent. Though this feature is inert while the Phoenix Gundam is not at its Full Power state.

There are many unsolved mysteries surrounding the Phoenix Gundam. It has no maintenance hatch on its surface, apparently since its Nanoskin Armor was supposed to maintain itself. It is capable of long distance flight without using propellant. Also, it apparently contained technology from multiple different timelines.

Phoenix Gundam has two Beam Rifles with a variable output. They can also combine together to become a powerful beam launcher.

The Phoenix Gundam releases liquid metal from the bulge located at the end of the binder (the same type used by the GF13-017NJ Shining Gundam's Shining Finger), which covers the entire unit and causes it to glow gold. It then rams through one or multiple enemies at once. This attack is only useable when the Phoenix Gundam has achieved a state of Full Power.

In SD Gundam G-Generation World, the unit was succeeded by the GGH-001 Halphas Gundam and the GGV-000 Barbatos which took the data from the Phoenix to develop 2 Gundams of destructive potential.

In SD Gundam G Generation Cross Rays, players obtain two Phoenix Gundams automatically at the start of the game. They can also obtain an extra one and add it to the shop by evolving a Phoenix Zero One Gundam at Level 7. Players can obtain the Phoenix Gundam (Full Power) by leveling up the normal Phoenix Gundam to Level 7 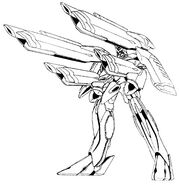 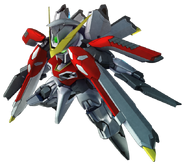 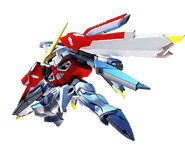