As its name implies, the Destroy Gundam is built for only one purpose: massive destruction. Nearly three times as large as an average MS, it can destroy an enemy mobile suit by simply stepping on it. To accomplish its goal of mass destruction, the unit is equipped with a large number of weapons that allows it to singlehandedly destroy a big city like Berlin or take out a large number of mobile suits and support crafts. Its designation, "GFAS-X", stands for "Gressorial Fortress Armament Strategic - EXperimental".

Despite its large size, the Destroy Gundam requires only a single pilot unlike its predecessor, the YMAG-X7F Gells-Ghe. However, the pilot has to be a Biological CPU or someone with similar enhancements. The Destroy Gundam is classified as a transformable mobile suit, and usually launches in its mobile armor mode which hovers over the ground at low altitudes through the use of thrusters mounted in its backpack. It can transform into MS mode by rotating its lower half 180 degrees, lowering the arms and flipping the backpack to the back.

The suit's backpack is equipped with three weapons, including two twin barrel high-energy beam cannons, 20 thermal plasma composite cannons mounted around the backpack's circumference, and four 6-tube multipurpose missile launchers. Other weapons of the suit include head-mounted 200mm energy cannon and four 75mm CIWS, three chest-mounted 1580mm multi-phase energy cannons, and two detachable arms each equipped with a beam cannon and 5-barrel hand beam gun. The detachable arms function like DRAGOON pods, allowing the suit to attack its target at any range, regardless of obstacles standing in the way. Aside from its vast array of offensive weaponry, the Destroy also carries defensive equipment in the form of three positron reflector shields, one in the backpack and usable only in MA mode, and two on the detachable arms.

Due to its bulk, the Destroy Gundam has poor mobility and serves more as a movable gun platform. This weakness is often exploited by enemy units, particularly high mobility mobile suits piloted by ace pilots, to take the Destroy Gundam down by getting in close and using close combat beam weaponry. Alternatively, DRAGOON Pods armed with beam spikes (such as the large DRAGOON Pods of the ZGMF-X666S Legend Gundam) can penetrate the Destroy's Positron Reflectors and quickly tear through the machine.

A pair of twin barrel beam cannons mounted on the Destroy's backpack, they are the suit's most destructive weaponry and also have the longest attack range. They are capable of destroying anything in their path, but can only be used in MA mode.

Mounted on the mouth section of the Destroy's head, it is derived from the GAT-X370 Raider Gundam's mouth-mounted energy cannon. This high output beam cannon can be used in conjunction with the chest-mounted Super Scylla cannons for serious destruction. Usable in MS mode only.

A set of 20 beam cannons set in the circumference of the Destroy's backpack, they are capable of continuous fire for limited amounts of time, and can adjust its shooting angle by rotating its barrels while being fired. Usable in both MA and MS mode.

The Destroy Gundam has four "Igelstellung" CIWS mounted in its head, these rapid fire weapons are usable only in MS mode and are normally used to shoot down missiles, weakly armored targets or stop enemy units from closing in. However, the Destroy rarely used them, as most enemy units would have been destroyed by the suit's array of weaponry before they can get too close.

Derived from the GAT-X303 Aegis Gundam's and GAT-X131 Calamity Gundam's Scylla Multi-phase Energy Cannon, three of these cannons are mounted on the chest of the Destroy and are usable only in MS form. They can deal serious damage against most targets, and can be fired in conjunction with the "Zorn Mk 2" energy beam cannon for maximum effect.

The forearms of the Destroy Gundam can detach and serve as wireless remote controlled weaponry like the DRAGOON Pods. They can be deployed in both MA and MS mode, and can operate in the Earth atmosphere, unlike most other types of remotely operated weapons. The large section covering the hand contains a single beam cannon and a positron reflector for defense, while the hands each contain a five barrel beam gun. It is also deployed to engage fast moving targets since Destroy's sheer size and weight result in the unit's poor mobility.

Mounted in the hands of the "Sturm Faust" detachable arm beam cannons, the beam guns' multiple barrels masquerade as the Destroy's fingers. The beam guns are used for multi-directional attacks.

Four missile launchers (with two facing the front and the rear) are mounted on the top of the backpack, they are primarily used for mobile unit interception and pure offensive barrage.

Three such devices are mounted on the Destroy, one on each Sturm Faust detachable arm, and one on the backpack, and they protect the suit from almost every form of ranged weaponry. The positron reflector shields are generated by the green-colored emitter in each location, and the arm-mounted shields are usable in both MA and MS mode, while the back-mounted shield is usable only in MA mode.

The first Destroy unit was stationed aboard the land carrier Bonaparte, and was assigned to Extended pilot, Stella Loussier. Together with a small number of Earth Alliance mobile suits, it sortied several times against ZAFT-occupied cities in Eurasia, causing massive damage to the ZAFT forces and killing thousands of people. This was ordered by LOGOS Leader Lord Djibril to show the world the consequences of aligning themselves with ZAFT.

From the steppes of Russia, Destroy finally reached Berlin, in Germany. While engaging the ZAFT forces in the area, the Archangel and the ZGMF-X10A Freedom Gundam intervened. Together they fought against the Destroy, which eventually transformed into its mobile suit mode. Later on, the ZAFT battleship Minerva engaged the Destroy under orders from the PLANT Supreme Council to aide their surviving comrades. As the only functional MS stationed on the Minerva, the ZGMF-X56S Impulse Gundam was launched, and its pilot Shinn Asuka managed to damage the Destroy using the suit's beam saber. Before he could finish it, he was warned by Phantom Pain Captain Neo Roanoke in his customized GAT-04+AQM/E-A4E1 Jet Windam, that the Destroy's pilot was Stella. Stunned by the revelation, Shinn tried to talk to her and was momentarily able to stop Stella from causing more harm, until an explosion within the cockpit caused her to spot the Freedom. Stella's conditioning kicked in, and she attempted to fire the Destroy's Zorn Mk2 and Super Scylla cannons at the Freedom, forcing Kira Yamato, the Freedom's pilot, to attack the Destroy by stabbing it in the middle chest cannon unit, then strifing the remaining two with its beam saber. The attack caused the near destruction of the unit, and the resulting explosions contributed to Stella's death.ç

After PLANT Supreme Council Chairman Gilbert Durandal exposed LOGOS's existence to the world, a large fleet of ZAFT and renegade Earth Alliance forces from the Republic of East Asia attacked LOGOS' main headquarters in Iceland, in the shadow of the Earth Alliance's stronghold- "Heaven's Base". During the battle, five more Destroy Gundams were fielded, one of which was piloted by Extended pilot, Sting Oakley, who formerly piloted the ZGMF-X24S Chaos Gundam. Firing their "Aufprall Dreizehn" cannons simultaneously, the five machines destroyed dozens of ships - most of which were former EA naval units. They then proceed to attack the remainder of the invasion force, but their rampage was later halted by ZAFT pilots Shinn Asuka with his new ZGMF-X42S Destiny Gundam, Rey Za Burrel in his new ZGMF-X666S Legend Gundam and Lunamaria Hawke in the Impulse Gundam, carving the path for ZAFT's victory over the remainder of the LOGOS group.[1]

Following the initial attack of the Alliance's Requiem superweapon, the Minerva launched a surprise attack on Daedalus lunar base. To defend the base, three more Destroys, along with a large number of mobile suits and mobile armors were deployed. The three were however no match for Shinn's Destiny Gundam and Rey's Legend Gundam. The downfall of the last of these monstrosities led to the defeat of the Earth forces.

Hovering over the lunar surface

Being transported inside a Hannibal-class

Two Destroy Gundams at the battle of Heaven's Base 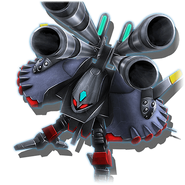 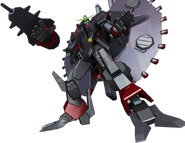 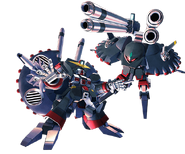 Fan-Art based on HCM-Pro Model