Two projectile guns, they are mounted in the head unit and are used for thwarting enemy movement.

Knuckle Crashers are essentially spiked gauntlets that are mounted on Gundam Freedom's forearms. When in use, they slide over each fist.

A handheld beam gun that can be stored on a hardpoint on the Gundam Freedom's waist when not in use. Max seems to unfavor this weapon and only used it to counter ranged attacks, he actually tosses it away before fighting Shuuji Kurosu's GF7-013NJ Yamato Gundam (which isn't armed with ranged weaponry), claiming that he didn't need it for their match.

A retractable club used as a melee weapon that resembles the clubs used by police officers. It is stored on a hardpoint on the Gundam Freedom's waist when not in use.

Gundam Freedom charges the Knuckle Crashers with energy, then unleashes it in the form of an electrically-charged punch. 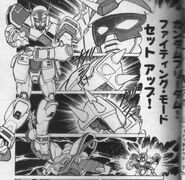 Retrieved from "https://gundam.fandom.com/wiki/GF7-023NA_Gundam_Freedom?oldid=466233"
Community content is available under CC-BY-SA unless otherwise noted.