Built during the end of the 13th Gundam Fight, the Super Nobel Gundam is the successor unit to the Nobel Gundam. With the unit being redesigned and overhauled greatly, it possessed powerful specs and and power compared to its predecessor unit. The overall mobility and speed is greatly increased as well thanks to the added thrusters all over its body. Like its sister unit, it is equipped with the same weaponry such as Vulcan Guns and and Beam Ribbon, however it lacked the predecessor's Berserker System, which was proven to be too dangerous to the pilot.

A pair of head-mounted shell firing weapons with a have high rate of fire. Used mainly for hindering opponents.

Although the Super Nobel Gundam lacked the Berserker System, it makes up for it with excellent mobility and speed. In achieving this, the Super Nobel Gundam is equipped with 10 vernier thrusters (6 in shoulders, 2 in the back and 2 in the back ribbon tail binders). These thrusters allows the unit to exhibit impressive speed and mobility, giving it superior battle capabilities in space.

In the events of the manga, following the destruction of the Walter Gundam at the end of the 13th Gundam Fight, Allenby recovers from her DG cell infection and later fought using the Super Nobel Gundam with the World Gundam Federation in the final battle against the Devil Gundam. 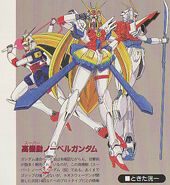 Retrieved from "https://gundam.fandom.com/wiki/GF13-050NSWII_Super_Nobel_Gundam?oldid=443089"
Community content is available under CC-BY-SA unless otherwise noted.