The GF13-047NMA Skull Gundam is a mobile fighter from Mobile Fighter G Gundam. It is piloted by Gala Garla of Neo Malaysia.

Neo Malaysia's representative mobile fighter is designed to resemble a skeleton, and its head, torso, and shoulder armor all follow the same skull motif. The Skull Gundam is equipped with highly effective built-in weapons, including rapid-fire lasers in its forehead and a corrosive liquid which is sprayed from a compartment in its belly. The areas of its chest which correspond to the skull's eye sockets house powerful flamethrowers, which the mobile fighter uses to perform its Kaen Kongoryu attack.

In the Finals, Gala participated in a tag team match with Neo Singapore's Russets Daggats, but they were both defeated by Domon Kasshu and Allenby Beardsley. After the 13th Gundam Fight ended, Gala returned as part of the World Gundam Federation to defend Earth from the JDG-00X Devil Gundam. 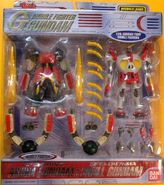