The GF13-044NNP Mandala Gundam is a mobile fighter from Mobile Fighter G Gundam. It is piloted by Kyral Mekirel of Neo Nepal.

Neo Nepal's representative mobile fighter is perhaps the most unusual contender in the 13th Gundam Fight. The Mandala Gundam's waist and arms are made up of highly flexible bead-like segments, and its upper body is attached to a bell-shaped floating base. By retracting its torso into this base, the mobile fighter can change into a well-protected Defense Mode. The Mandala Gundam's only weapon is its Khakkhara, which contains both a powerful flamethrower and a concealed beam saber. Its supernaturally skillful pilot, the blind assassin Kyral Mekirel, can use this weapon to perform exotic attacks like the fiery Rengoku Reppu.

For the history of Mandala Gundam, see its pilot Kyral Mekirel. 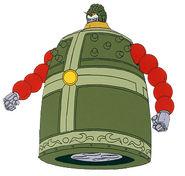 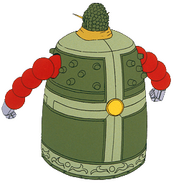 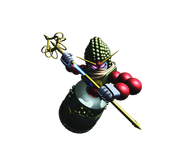