The GF13-037NCA Lumber Gundam (Grizzly Gundam in the English dub) is a mobile fighter from Mobile Fighter G Gundam. It is piloted by Andrew Graham of Neo Canada.

This heavyweight mobile fighter represents the space colony of Neo Canada. Like the Bolt Gundam, it's a powerful and heavily armored machine which uses its sheer strength to overpower its enemies - a tactic which suits its pilot, the massive and muscular Andrew Graham. A pair of Lumber Axes are stored in racks on the Lumber Gundam's forearms, and its feet are equipped with spikes to help them keep their grip on steep mountainous terrain.

In the Super-Class! Mobile Fighter G Gundam manga, Lumber Gundam is capable of transforming into a giant axe.

An axe equipped on both arms. Combined with the power of the machine, it is powerful enough to chop down a forest in a single swing.

Preparing to fight against Bolt Gundam.

Hanging on the edge of the cliff

Appearance in "All Fighters Gathered! The Final Battles Begin" 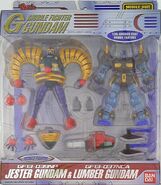