This amphibious mobile fighter represents the space colony of Neo Denmark. While its performance on land is relatively poor, the Mermaid Gundam is all but invincible in the water, and it can transform into a streamlined Fisherman Mode to carry out high-speed attacks on submerged enemies. However, Neo Denmark has exhausted its budget in its effort to develop the ultimate underwater mobile fighter. The colony is now unable to afford too many more repairs, a factor which puts additional pressure on pilot Hans Holger.

A three-pronged spear, it is capable of shooting energy beams for range attacks.

A weapon that fires a net of beam energy to trap and immobilize the enemy.

Trident-shaped beams are capable of being shot from the Mermaid Gundam's eyes in fish mode.

Despite the Mermaid Gundam's poor maintenance after every match, pilot Hans Holger was able to defeat Carlos Andalusia's GF13-045NSP Matador Gundam in the Finals. Unfortunately he was unable to hold out against Sai Saici's GF13-011NC Dragon Gundam. When he was defeated by Sai, Hans and his sister returned to Neo Denmark. After the 13th Gundam Fight ended, Hans returned as part of the World Gundam Federation to defend Earth from the JDG-00X Devil Gundam. 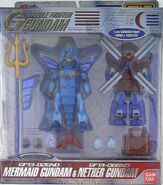