Log in to edit
watch 00:53
What is the Shining Gundam?
Do you like this video?
Play Sound

The GF13-017NJ Shining Gundam is a mobile fighter featured in the anime Mobile Fighter G Gundam. It was built by the nation of Neo Japan for the 13th Gundam Fight and piloted by Domon Kasshu, as well as occasionally by his crew member Rain Mikamura.

The Shining Gundam was developed for the 13th Gundam Fight by Dr. Mikamura, a Neo Japan scientist. Designed with an emphasis on mobility, it has an excellent balance of offense and defense, and is equipped with the ability to faithfully reproduce the many techniques of The School of the Undefeated of the East, performed by Domon Kasshu, the champion of colony martial arts. Since the Shining Gundam is an machine that exerts its maximum potential in close combat, there are few fixed armaments.

A special feature of this machine is that the emotions and conditions of the passengers are reflected in the machine's performance. In addition, a mechanism that can power up the machine in stages has been introduced.

This form is the default mode of Shining Gundam. It is used when Domon is fighting another opponent without the use of the Shining Finger.

This is the first of Shining Gundam's high-powered modes, which allows it to employ its devastating Shining Finger attack. In this form, the Gundam's arm covers pop out and its face armor opens for extra ventilation. This transformation briefly increases Shining Gundam's speed and offensive capabilities, but reduces its sensor effectiveness, adaptability, and defensive strength.

The second of Shining Gundam's high-powered modes. In this form, Shining Gundam's overall performance is increased by 50%, its speed and offensive power are doubled, and the panels of its armor open up to reveal a variety of cooling systems, boosters and generators. The Super Mode is powered by the emotional energy of its pilot Domon, who at first could only attain this state when he lost control of his rage and passion. However, through the instruction of Schwarz Bruder, Domon learned to attain the serene state of mind of a true warrior, allowing him to activate the Super Mode at will.

Shining Gundam's True Super Mode is similar to the regular Super Mode, but changes Shining Gundam's colors completely gold. The overall capabilities of the unit are increased tremendously. However, this mode can only be used when Domon is in a state of complete calmness. Later, after Domon had replaced Shining Gundam with the GF13-017NJII God Gundam, both he and his fellow Shuffle Alliance members achieved variations of the True Super Mode called "Hyper Mode".

Two swords, one large and one small, are equipped on the left waist. These are primarily used for slicing into opponents' Gundams or parrying other beam attacks.

A pair of rapid-fire, close-range defensive armaments built into the collar.

A pair of beam guns mounted on each forearm.

A canister that blankets a large area in smoke.

When Domon's anger peaks, his emotions are turned into energy. This activates Shining Gundam's Super Mode, giving out maximum output. He is later able to activate the Super Mode at will after achieving a serene state of mind, unlocking the True Super Mode.

When separated from the main body, the backpack of the Mobile Fighter developed for Gundam Fights functions as a hover car called the Core Lander. It is mainly used as the transportation vehicle for Gundam Fighters, and has high running performance regardless of the terrain. It can also be controlled externally, such as by flying in response to the Gundam Fighter's call. Incidentally, the shape of the Core Lander differs depending on the colony to which it belongs.

Domon's signature move, the Shining Finger uncovers the finger joints and coats the hand in liquid metal, concentrating a large amount of energy into it, resulting a bright green glow. Doing so enables Shining Gundam's hand to tear through the armor of rival mobile fighters. Typically, Domon utilizes the technique to grab the head of an opposing Gundam and crush it, which not only wins the fight but eliminates the fighter from the Gundam Fight altogether. Though the Shining Finger was usually a close range attack, Domon was at times able to use it to fire a powerful energy wave from Shining Gundam's hand such as when he used it to break free of the Gundam Rose's rose net and later to push back a flash flood during his training in the Guyana Highlands. During his first encounter against the Master Gundam, Domon and Rain (who had piloted the Shining Gundam to protect herself from the Death Army and was still clad in the mobile trace suit) managed to increase the power of Shining Finger by performing the move together.

Used in Super Mode, a more powerful variant of the Shining Finger, the Shining Finger Sword concentrates the energy of the Shining Finger into one of the beam swords; changing its color to green. The length and power of the beam sword increases dramatically and Domon can use the Sword to either slash the opponent (shouting "Men!" (面 - "Front) 3 times) or impale them (shouting "Tsuki!" (突き - "Thurst") 3 times). However, this technique was unreliable as it relied on the Emotion Energy System, meaning that it could only be used based on Domon's state of mind.

After being built by the Neo Japan colony alongside its sister unit, Rising Gundam, Shining Gundam was sent to Earth with Domon and Rain at the onset of the 13th Gundam Fight. Though Domon used it for various Gundam preliminary fights across the globe, he also used it for battles involving his and Rain's secret mission to hunt down the Devil Gundam. After the betrayal of Master Asia in Shinjuku, Domon took Shining Gundam with him to the Guyana Highlands to train himself to master its Super Mode. When the Devil Gundam later appeared in the Highlands, Domon was ultimately able to activate Shining Gundam's True Super Mode and deal a devastating blow to the Devil Gundam. However, Shining Gundam was severely damaged soon after by Master Asia's Master Gundam. Fortunately, the Neo Japan government had deployed the more powerful God Gundam to Domon's location, and he transferred Shining Gundam's combat data into the new unit's system with Rain's help in order to activate it. Domon then used the God Gundam to deal a finishing blow to the Master Gundam, after which he reluctantly abandoned the wrecked Shining Gundam as he rushed to the Gundam Fight finals in Neo Hong Kong. Shining Gundam was never seen again after this.

A replica of Shining Gundam, it is equipped with an A.I. system, which controls the unit. It lacks the Super Mode system.

A custom close-combat stealth MF based on a prototype of the Shining Gundam. 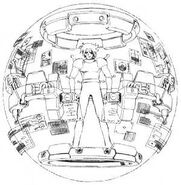 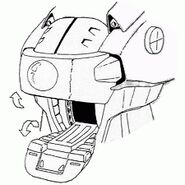 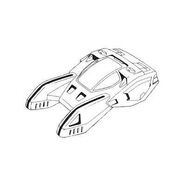 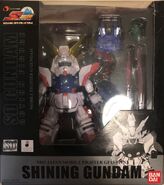