Log in to edit
watch 00:59
What is the God Gundam?
Do you like this video?
Play Sound

The GF13-017NJII God Gundam (aka G Gundam, Burning Gundam in the English dub) is the titular Mobile Fighter of Mobile Fighter G Gundam. It was the second Mobile Fighter used by Neo Japan in the 13th Gundam Fight, and is piloted by Domon Kasshu.

As the successor of Shining Gundam, the God Gundam is equipped with a well balanced arsenal. For ranged combat, the God Gundam possesses four head mounted vulcan guns along with two tri-barreled machine cannons in its shoulders. For close combat, God Gundam can draw its two beam swords (one stored in a recharge rack on each hip) or deploy a pair of spurs on its forearms called the God Slashers. The God Gundam was also capable of numerous special attacks, some of which were improvised on a moment's notice by pilot Domon Kasshu. The main technique was Bakunetsu God Finger, an upgraded version of Shining Gundam's Shining Finger. The Bakunetsu God Finger's power allowed the God Gundam to concentrate energy into its hand, plunging it into an enemy mobile suit and subsequently discharge its power in a secondary technique called "Heat End" that explodes the enemy. Other techniques included the Bakunetsu God Slash, Bunshin Sappou God Shadow, God Slash Typhoon, and God Field Dash. The most powerful of the God Gundam's attacks however was the Sekiha Tenkyouken, which created an explosive ball of energy that obliterated everything in its path. Domon had learned the technique from Master Asia while they were cornered by a Gundam Head during the Gundam Fight finals. During the final battle with Master Asia, Domon created a variation technique called the Sekiha Tenkyou God Finger, a combined form of the Sekiha Tenkyouken and the Bakunetsu God Finger, which allows Domon to project a hand of energy that seized and crushed Master Asia's Master Gundam in its grip. Another variation was created during the final battle with the Devil Gundam when Domon combined his power with Rain Mikamura's to create the Sekiha Love-Love Tenkyouken.

Even under normal conditions, the God Gundam is as powerful as the Shining Gundam's Super Mode, but it can also change into a high-performance mode powered by the emotional energy of its pilot Domon Kasshu, while he was in a serene state of mind. In Hyper Mode, the God Gundam's chest opens to reveal its Energy Multiplier, the wing-like field emitters on its back unfold to form the God Field, its overall performance is increased by 130%, and it can perform a devastating Erupting God Finger and Sekiha Tenkyoken attacks. When fully utilizing his serene state of mind (known as Meikyō Shisui (明鏡止水, Clear Mirror and Still Water) in the original Japanese version), the God Gundam's colors change to completely gold, increasing the God Gundam's overall capabilities tremendously.

A pair of 3-barrel machine cannons are housed on the clavicle section of God Gundam, they are more powerful than the head-mounted vulcan guns.

A sword-like beam weapon for close combat, the God Gundam is equipped with a pair stored on the side armor. Normally it is a beam sword, but when using hyper mode, the output increases and it becomes a god slash.

Claws mounted in pairs on each forearm. They open up when the Bakunetsu God Finger attack is performed. Used only once during Domon's rematch against Michelo Chariot to gouge out the eyes of Nero Gundam.

Similar to Shining Gundam, God Gundam is able to focus all its energy into its hand to perform its signature finisher, the Erupting God Finger; allowing it to rip through solid matter with ease or project its power as a flaming energy wave. As God Gundam's energy output is far greater than Shining Gundam's, it's forearm armor slides over its hand to form an armored gauntlet when God Finger is activated to better control its energy. Like with the Shining Finger, the finger joints come off and the manipulator is covered with liquid metal from the joints. Unlike its predecessor's move, which was used to destroy a rival's head, the Erupting God Finger is usually performed by plunging it directly into the abdominal area of the enemy mobile fighter followed by the Heat End technique. Alternatively, the technique can also be used to shoot energy as a projectile.

A second-stage finisher performed after Erupting God Finger. With its hand plunged into an opponent's body, God Gundam discharges all of its energy at once as Domon closes his hand, destroying the mobile suit from the inside out.

Seen in Super Robot Wars Impact. A combination attack between God Gundam and Rain Mikamura's Shining Gundam, with both Gundams unleashing their God Finger and Shining Finger attacks on the enemy.

Super Robot Wars-exclusive. A combination attack between God Gundam and GF13-001NHII Master Gundam, with both Gundams unleashing their God Finger and Darkness Finger attacks on the enemy. The above names are respectively used for SRW Impact & Advance Portable/Advance/R.

A technique Domon developed to defeat Kyral Mekiral of Neo Nepal. Focusing all its power into a single beam sword strike, the God Gundam charges forward and slices the opponent in half. It consumes less energy than God Finger, which is an energy-releasing technique.

The ultimate technique of the School of the Undefeated of the East, which Domon learned from Master Asia prior to his match with Schwarz Bruder. All of the God Gundam's power are focused into both hands and released as a massive ball of energy that obliterates everything in its path.

A technique which consists of initiating the God Finger first before unleashing the Sekiha Tenkyouken, boosting it's power. Used by Domon in his battle with GF13-021NG Gundam Spiegel during the last round of the Semifinals. Not to be confused with God Gundam's ultimate solo attack, Sekiha Tenkyou God Finger.

A seemingly more powerful version of the Sekiha Tenkyouken used by Domon to destroy the Devil Gundam's cockpit, along with both versions of Kyoji Kasshu.

A variation on the Sekiha Tenkyoken performed only once by Domon and Rain to destroy the Devil Gundam once and for all. In Super Robot Wars games, it first appeared as an event in SRW F Final, before being added as a proper attack in later games, performed together with Rain's JMF1336R Rising Gundam (64, Advance, Advance Portable, MX, J), or alternatively, the Shining Gundam (Impact, R). The words "Bakunetsu" or "Bakunetsu God Finger" are usually also added in front of the attack's name in SRW.

A variation on the Sekiha Tenkyouken exclusive to video games, it is performed by the God Gundam and the GF13-001NHII Master Gundam. Both mobile fighters execute the Tenkyouken on opposite sides of the opponent to crush it between two giant energy fists.

A variation on the Sekiha Tenkyouken seen in the Shin Super Robot Wars Comic. God Gundam, piloted by Domon and Rain, concentrates power from all of the Londo Bell team's robots and members, before unleashing a Love-Love Tenkyouken attack at the Devil Gundam OG, dealing significant damage to it.

Using energy from the Hyper Mode, the God Gundam creates multiple copies of itself. Used once against Chibodee to counter his Burning Machine Gun Punch.

A variation of its usual God Slash attack where God Gundam spins like a top, followed by a variation of the Heat End technique. Used once against George de Sand to counter his Rose Hurricane attack.

While in Hyper Mode, the wing-like emitters increase in power, increasing propulsion. Used once against Argo to counter his Sakuretsu Gaia Crusher after noticing the stress it was putting on Bolt Gundam's legs.

God Gundam charges its entire body with energy and launches itself at the enemy in the form of a massive ball of energy.

A technique borrowed from Argo Gulskii, it was used during the Battle Royale together with the Bolt Gundam and Dragon Gundam. By tapping into the power of the Shuffle Alliance crest, the God Gundam strikes the ground with its fist, triggering a seismic upheavel that raises the rocks around the God Gundam. It was used to create a tunnel for Domon to escape to confront the Devil Gundam.

A powerful technique used in tandem with the other members of the Shuffle Alliance, while in Hyper Mode. Energy is concentrated into the users' right hands and then released together. This technique is used only once to destroy Ulube and his Grand Master Gundam.

A technique seen utilized in the Comic BomBom manga. The God Gundam unleases a burst of flame from its arm.

Seen in SD Gundam G Generation F. The God Gundam, riding on Fuunsaiki, circles the enemy at a tremendous speed, generating a large tornado, before striking them down.

Seen in SD Gundam G Generation. While riding on Fuunsaiki, the God Gundam rams the enemy with Fuunsaiki's horn.

The Gundam Fight Finals would see Domon practically rebuild his skills from the ground up as he fought his opponents. Many of his attacks, such as the Bunshin Sappou God Shadow and the God Slash Typhoon were created to counter attacks devised by his teammates within the Shuffle Alliance. The God Gundam would serve its purpose well, leading Domon to the Battle Royale match and his fight with Master Asia, claiming him the title of "Gundam of Gundams". In the end, Domon would take the God Gundam into space, leading the final fight against the Devil Gundam and rescuing Rain.

A variant of the God Gundam known as the Hyper God Gundam also appears in the manga Mobile Fighter G Gundam Side Story: The Next Generation. This time, it participates in the 14th Gundam Fight piloted by Domon's student, Yuugo Kagami. 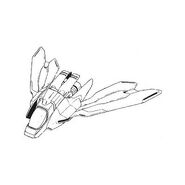 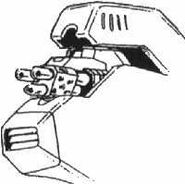 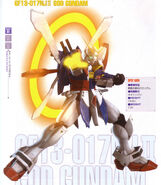 In Mobile Suit Gundam: Extreme Vs. 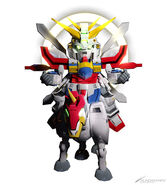 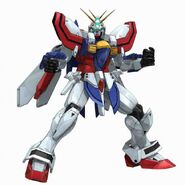 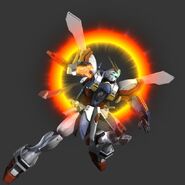 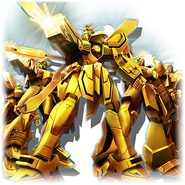 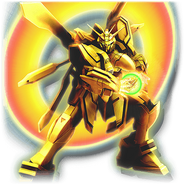 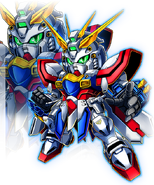 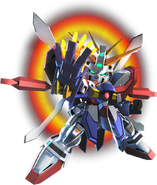 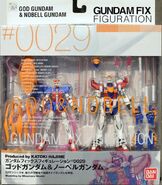 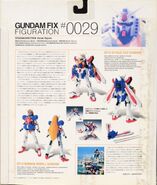 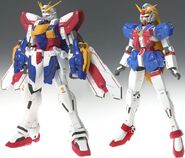 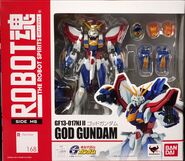 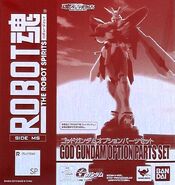 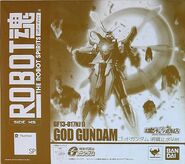 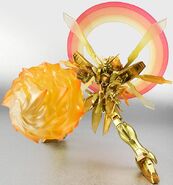 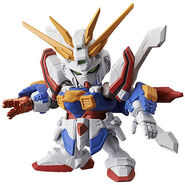 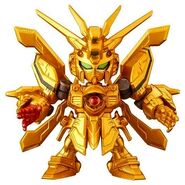 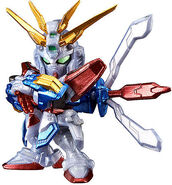